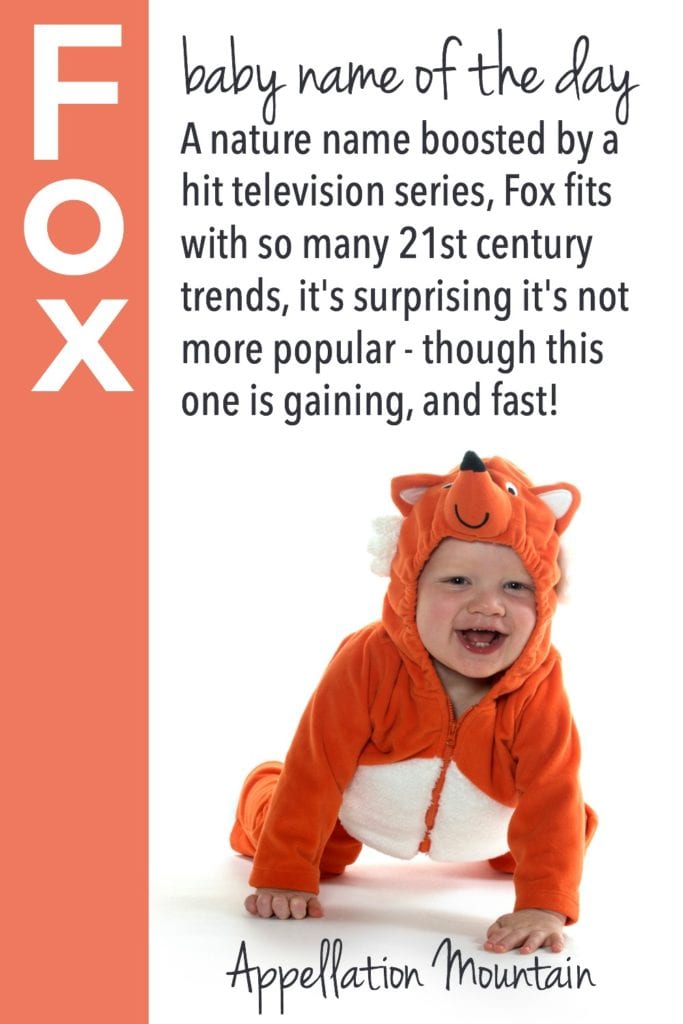 Fox combines the short, snappy sound of Max with the bravado of Leo.

Thanks to Linda for suggesting our Baby Name of the Day.

This one might belong with in the nature name category, but a supernatural drama put it on the list of possibilities.

In 1993, we met Special Agent Fox Mulder.  Whip-smart, paranormal-obsessed investigator Mulder teamed up with the equally sharp, but skeptical, Dr. Dana Scully on The X-Files.

Some speculated that the character’s name came from the young network showing the series. If that were true, then Agent Mulder’s given name would have been a nod to William Fox, the early twentieth century entrepreneur who founded the studio.

Instead, series creator Chris Carter apparently knew a boy with the name years before he dreamed up the character.

The name wasn’t used in meaningful numbers until The X-Files hit it big. But nearly any surname can be found as a given name occasionally.

In English, it might have started out as a nickname for someone who resembled the animal. Or maybe someone considered devious. It absorbed plenty of similar sounding surnames over the years, too – Fuchs and Faulks and Focks, all separate names once upon a time.

The creature appears throughout myth and folklore. In some cases, he misbehaves. Think of everything from Aesop’s Fables to Dora the Explorer’s reliable villain, Swiper. As animals go, they’re known as clever and resourceful, if not always pure of heart.

Foxy serves as a compliment of sorts, immortalized in plenty of pop songs. And to outfox is to outwit, another positive – of sorts.

We find others, too, over the years.

Factor in the surname, and you might think of actors Michael J. or Megan.

A trifecta of trends boosts this name:

Layer in The X-Files, and it’s a wonder this name isn’t already heard everywhere.

Fox: By the Numbers

For now, this name remains surprising. But it also feels very wearable today. If you’re after a daring name that’s easy to say and spell, Fox delivers. And if you happen to have a Fuchs or Faulks in your family tree, this counts as a heritage choice, too.

Chances are good this name will crack the US Top 1000 soon, but it remains a nicely distinctive name for a son.

Would you consider an animal name for a child?