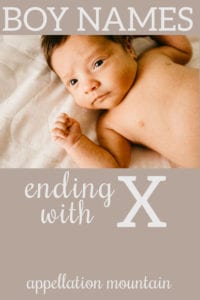 Boy names ending with x range from the mainstream to the edgy, the solidly masculine to the unisex.

And they’re bigger than ever before!

Not only does X offer a cool, edgy sound, but it carries some appealing associations.

X marks the spot where treasure is found. If you have the X factor, it’s a certain appeal that makes you stand out. The X Games are the twenty-first century answer to the Olympics – every bit as inspiring, but far more modern. In the sporting world, and many other uses, X stands in for extreme.

It also substitutes for extra and excellent, a vibrant, high-energy, boundary-pushing sort of vibe.

The Jolie-Pitts chose boy names ending with x for three sons: Maddox, Pax, and Knox. Two of those three are now chart-topping favorites, helping to boost the trend.

With mythological choices gone mainstream, Ajax can be seen as more than a cleanser. The Trojan war hero has yet to inspire many parents, but it could wear well. Artist Marni Kotak chose the name for her son, whose birth and first year were documented in a series of performances at Brooklyn’s Microscope Gallery.

Arguably the most classic ending with x name on the list, Alex is both an independent name and the logical short form of the evergreen Alexander. Style-wise, Alex is eclipsed by Axel these days, but that x-ending keeps the name in the game.

Singer-actress Ashlee Simpson surprised the world when she and musician husband Pete Wentz chose the New York borough of The Bronx as inspiration for their son’s name. While it remains beyond the Top 1000, it was virtually unknown before the 2008 celebrity birth announcement.

Actor Dax Shepard made his name as a buddy of Ashton Kutcher’s on Punk’d and has gone on to have an acting career of his own. The name is also worn by a soccer player, a town in southwestern France, and a creature in the Star Trek universe. It’s rising steadily in use, along with newcomers like Daxton.

Short for Dexter, could just Dex work? It softens the association with the fictional serial killer, but also forgoes some of Dexter’s vintage, quirky charm. It might be a great compromise between Dax and Felix.

A place name dating to the early Middle Ages, Essex has a romantic sound. The current Earls of Essex date their title to the seventeenth century, but the title was first in use five centuries earlier. Today it’s a dashing rarity to consider.

Once reserved for felines, this happy name was boosted by so many things. Harry Potter‘s potion reminded future parents everywhere of the name’s positive meaning. More than one celebrity has chosen Felix. Austrian daredevil Felix Baumgartner jumped from the edge of space in 2012. Along the way, the name’s image transformed from the fussy half of The Odd Couple to a bold adventurer. Factor in that Felix Leiter is a long-standing American ally of James Bond, and Felix is quite the dashing possibility.

It was a surprising choice for FBI agent Fox Mulder in The X-Files, but it has a long history of use as a nickname, a surname, and even some history in the first spot. We’re wild for animal names, meaning that Fox combines two trends: a fierce, outdoorsy, nature vibe and the ending with x sound. The possible association with Fox News feels like a potential drawback, but there’s still plenty of potential.

A rock star surname, thanks to the legendary Jimi Hendrix, this name combines surname style with that vibrant x ending. But because it’s related to the classic Henry, Hendrix feels more traditional than some surname name options.

The newest installment of the Star Wars movies gave us General Armitage Hux, a sometimes-villain. And yet, a villain isn’t necessarily a reason to discard a name. Given our affection for name like Huxley – and, of course, that great x-ending sound – Hux has potential.

If Jackson can stand alone, why not Jax? Alternative spellings Jaxon and Jaxson followed Jackson up the charts. Names like Jaxton are heard, too. Jax falls somewhere in between Jack and Max, but with a far more modern sensibility, too.

We knew him in Dead Poet’s Society, but it was the Jolie-Pitt family’s use of the name that really put Knox on the map. The associations with Fort Knox – where the United States Bullion Depository holds the nation’s gold reserves in a legendary vault – add an interesting layer to this short, punchy name.

Former world heavyweight champ Lennox Lewis lends this name a certain toughness. But it’s a polished choice, too, at home in a blue blazer. Maybe that’s because of Lenox china – spelled with just one N. Or maybe Lennox just shares that upbeat, but very wearable quality of other Scottish surname names, like Cameron and Bowie.

Superman’s archnemesis Lex Luthor is actually Alexander. But we know him as Lex. Parents who love mini names have embraced just Lex – though of course, it might also be short for place name Lexington, and new coinages like Lexton are out there, too. If you’re after short, compact boy names ending with X, Lex might belong on your list.

If Fox works, why not Lynx? The tufty-eared wildcat has lent his name to many things, including a former bestselling car from the 1980s, the Mercury Lynx. Today Lynx feels like a daring possibility, but not completely unknown. It might also serve as a short form of presidential surname Lincoln.

A unisex name, Lux is simply the Latin word for light. It feels like an edgier spin on Lucas and Luke, a word name that fits with so many boy names ending with X.

Surname Maddox is derived from the Welsh Madoc. Mad means fortunate, so it makes for a nicely meaningful choice. Angelina Jolie adopted her first child, Maddox Shivan, in 2002. The name immediately caught on with parents in the US.

As classic as Alex – and almost as popular, too! Vintage Max is boosted by dozens of real and fictional bearers, from Where the Wild Things Are to dozens of actors and athletes. Plenty of formal options exist, and their popularity obscures just how widely-used Max is these days. But it’s the three-letter Max that ends with x.

A gemstone name that feels just right for boys, Onyx is usually associated with the color black. With Jasper topping the charts for boys, and Ruby for girls, no surprise that Onyx is racing up the US Top 1000.

Another Jolie-Pitt brother, Pax is the Latin word for peace. It started out as a Roman goddess, the personification of the virtue. These days, Pax is more popular for boys than girls – but Paxton is even more of a favorite.

The acting Phoenix family helped put this one on the map. But it’s also a place name and a richly symbolic one, with ties to ancient myth, early Christianity, and Harry Potter. That x ending is just another bonus.

Regal Rex belongs to everyone from a Hollywood leading man from the mid-twentieth century to plenty of beloved family pets. In an age of boys called Messiah and King, Rex feels downright classic. Plus, what kid wouldn’t want to share part of his name with a fierce and famous dinosaur?

SE Hinton gave the name to a character. There’s a legendary country singer by the name, too – Woodward “Tex” Ritter. And cartoonist Tex Avery – born Frederick – created Bugs Bunny. For a mini name, it’s big – after all, it evokes the state of Texas. And it’s rare, too, given to only a handful of boys over the years.

What are your favorite boy names ending with X? 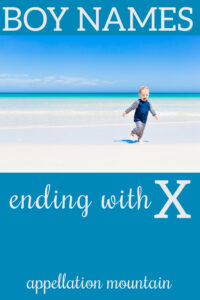 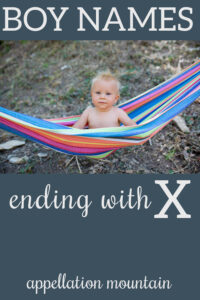