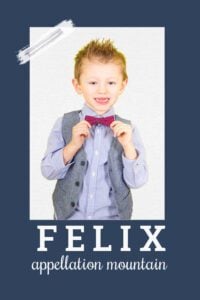 The baby name Felix brings to mind a saint and an animated cat. With that stylish X ending, this classic choice is back in favor.

Thanks to Miranda for suggesting our Baby Name of the Day.

The New Testament gives us a Felix. He’s the governor of Judea who imprisoned Paul. History tells us that his full name was probably Marcus Antonius Felix, and while details are slim, it sounds like he was probably corrupt.

Despite that inauspicious start, the name caught on among early Christians. Several saints, along with three popes, have answered to the name.

Felix’s Latin origins tie it to a word meaning lucky or successful. Roman general Sulla took Felix as an extra name, in recognition of his victories in battle.

The name appears in use in England during the Middle Ages, but it was long more popular in continental Europe.

Nineteenth century German composer Felix Mendelssohn ranks among the most famous. He’s considered one of the greats of the Romantic era.

A handful of European princes and nobles wore the name, too, in Denmark and Austria and elsewhere. Count Felix Yusupov took part in the plot to murder Rasputin on the eve of the Russian Revolution.

That takes us right into the 1900s, when the baby name Felix picks up some really interesting associations.

European parents continued to name their baby boys Felix, at least in some countries at some moments. There’s a Nobel Prize-winning Swiss physicist, a Dutch scientist who discovered how to measure gravity at sea, a French art critic, and more.

But the US offers the most intriguing assortment of Felixes.

Way before Walt Disney ever sketched a mouse (or a rabbit), Pat Sullivan and Otto Messmer created Felix the Cat. After a 1919 debut, the feline became a star in the 1920s, during the silent movie heyday. They chose the name for two reasons: first, it sounds like feline; second, the meaning of the name Felix is so auspicious. Even though Felix the Cat retired decades ago, he remains a widely-known icon.

Author Ian Fleming’s immortal super-spy James Bond is known across the world. But fans of the franchise might also think of Felix Leiter. IMDb lists eight actors who have played the part across ten films and counting. Leiter is a CIA operative who often collaborates with Bond on missions. Fleming borrowed both of the character’s names from friends.

Then came Neil Simon’s 1965 play, The Odd Couple. Later adapted as a smash hit television series, it paired slovenly sports reporter Oscar Madison with neat freak photographer Felix Ungar. Following their divorces, the two newly single men shared an apartment. While the original sitcom left the air in 1975, reboots and adaptations have followed ever since.

While usage of the name popped in fiction across the twentieth century, it fell in real life.

HOW POPULAR IS FELIX?

The popularity of the name Felix had tumbled by the year 2000.

That made the baby name Felix feel edgy, even daring. Or just quirky and cool. After all, the cat feels sort of indie and retro.

But lately, the name has enjoyed a revival.

As of 2020, the baby name Felix reached #225. What helped drive the name’s rediscovery?

High-profile celebrities including Gillian Anderson and Hugh Grant chose the name for their children. So did Elizabeth Banks.

A generation of future parents discovered the name’s association with good luck thanks to the Harry Potter series. Wizards rely on the potion Felix Felicis when they need a little extra good fortune. (And yes, it’s banned in international Quidditch competition.)

We met Fix-It Felix, the fictional video game character, in 2012’s Wreck-It Ralph. He returned for the 2018 sequel.

Sci fi series Orphan Black gave us Felix Dawkins. The original series ran from 2013 to 2017, featuring some amazing character names. A sequel is expected to debut on AMC in 2023.

There’s also a Felix in the new Battlestar Galactica universe, and another in Jenny Nimmo’s Children of the Red King series.

Even without the pop culture push, the baby name Felix would likely be seeing renewed interest.

Not only has a solid century passed, making the name feel fresh once more, it offers lots of appealing qualities:

The baby name Felix has all the makings of popular boys name. But for now, it remains just under the radar.

If you’re after a name that is just slightly different, the baby name Felix has the potential to stand out while fitting in.

Would you consider Felix for a son? 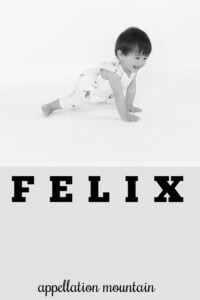 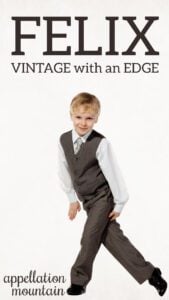