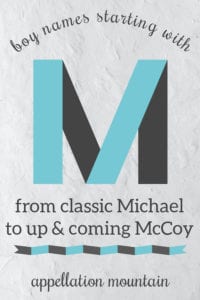 Parents love the letter M. It’s one of the most popular letters for boy names, not far behind favorite first initials J, A, and C. As of 2020, it comes in fourth.

Michael dominated the top spot on US popularity charts from the 1950s into the 1990s. Everybody likes Mike, and we grew up with him, too. From television dad Mike Brady to sports hero Michael Jordan, it’s a rock solid choice for a son, a Biblical classic that stands the test of time. But it’s not the only traditional M option, and it’s not even the most popular M name for boys at the moment.

There’s a choice that represents every style, from buttoned-down Matthew to modern Mason. The religious and culturally significant Muhammad – choose your spelling – shares the same chart as celebrity-fueled surname Maddox.

Read on for more boy names starting with M, from the most popular of the moment, to the rarities you might consider for a son.

These are the most popular boy names starting with M, based on births in calendar year 2020. (Check the full list for yourself here, at the Social Security Administration’s name site.)

A surname name that rocketed up the US popularity charts beginning in the 1990s, Mason feels like a modern staple.

Despite falling from a long-time perch at the very top of the charts, Michael remains used in big numbers. It feels every bit as classic as William or James. And despite Biblical roots, it doesn’t feel especially Christian compared to new Old Testament favorites like Elijah and Isaac.

Matthew might be the classic, but romance language Mateo is the white hot favorite.

Like Michael, Matthew is a New Testament name with broad appeal. The ill-fated Downton Abbey hero – gone, but not forgotten – lends this name a little bit of dash, as does leading man Matthew McConaughey. Both are always Matthew, as are many boys given the name today. Though nickname Matt fits in with brisk go-tos like Jack and Cole.

Top Gun put Maverick – the call sign of Tom Cruise’s character – on our radar. With a long-awaited sequel due in 2021, the name could fly higher still. Somehow, Maverick manages to strike an original, independent note even as it grows so very popular.

You could view Micah as an update to Michael, but it’s a separate Biblical name. The Old Testament appellation does split the difference between more conventional picks and rising favorites like Isaiah and Ezra nicely.

An alternate spelling of Miles every bit as valid.

Take Miles, add a dash of Leo-Hugo-Arlo, and Milo is the appealing result. One possible bonus: Milo Auckerman is the long-time frontman of legendary punk rock band the Descendants. (He also has a PhD in molecular biology.) A caricature of Auckerman is the band’s mascot, gracing most of their album covers. It lends this brief name a smart and edgy vibe.

A surname name, Maxwell came from Mack’s stream. The Beatles recorded “Maxwell’s Silver Hammer” in 1969. Murderous Maxwell seems like odd inspiration for a child’s name, but it rose steadily after the song’s release, picking up steam with all of the Max names in the 1990s.

Speaking of Max, it’s a mini name that feels brainy and brawny. For every Max Planck or Weber, there’s a Mad Max.

Angelina Jolie brought Maddox to our attention when she adopted her son way back in 2002. It comes from a Welsh name meaning fortunate. It immediately caught on, and parents have continued to choose it ever since.

Another Matthew name, this time by way of Italian – and it’s not the last Matt on this list.

Every bit as classic in Spanish, Miguel is simply the translation of Michael.

A name that made headlines when a judge ruled it was unacceptable, Messiah succeeds on its spiritual meaning and stylish sound. Think Isaiah and Elijah. (The ruling was later overturned. Any observer of names will tell you that there are many, many Messiahs.)

Another popular Mat- name, this one with the stylish -s ending, too.

An ancient spin on Mark that manages to feel a little more current.

A former Top Ten pick from the 1950s and 60s, this New Testament name remains a traditional pick for a son.

The swaggering name of Russell Crowe’s courageous character in 2000’s Gladiator, and a Max name that turns it up to eleven.

UP and COMING M NAMES for BOYS

A sweet spot name for a son, the kind of favorite that everyone recognizes – but relatively few families are choosing.

A slightly French take on an ancient name.

The ancient name that preceded Marcel, as well as Marcello. It’s a name far less expected than Marcus or Mark, an alternative to Atticus.

A few years ago, Marley might’ve said “I named my baby for a dog.” A loving, unforgettable dog from a bestseller, but still. As the memoir fades from our pop culture memory, Marley reverts to its previous image: the surname of a music legend. That makes Marley masculine and oh so very cool.

Speaking of surnames, McCoy is one of those Mc/Macs that works well for boys. If something is “the real McCoy,” it’s the real deal. The feuding Hatfield and McCoy families put the name in the history books. And the original Star Trek crew included Dr. McCoy. It’s a quirky collection of ties, but it works.

Hunter, Carter, why not Miller?

While Morgan remains more popular for our daughters, figures like leading man Morgan Freeman remind us that this unisex name can be quite handsome for a son.

The Arabic form of Moses, Musa has been rising in use along with lots of similar names. It’s catching on quickly for two reasons: first, we’ve warmed to boy names ending in a. If Noah and Joshua can hold the top spot in the US, why can’t we call our sons Musa? But more critically, this is part of the rise of Arabic language names throughout the English-speaking world. Muhammad grabs headlines, but it’s not the only name gaining.

Long tied to the Roman god of war, Mars might’ve felt too bellicose. But now Mars feels as smooth as chart-topping, Grammy-winning singer Bruno Mars. It helps that parents have embraced celestial names, choices borrowed from mythology, and, of course, -s enders like Miles.

Artist Maxfield Parrish makes this slightly more familiar. It’s a sophisticated spin on so many Max names, one that feels distinctive, even in a crowd.

Back in the nineteenth century, Maceo Grajales led the fight for Cuban independence. It seems likely his name inspired the parents of Maceo Pinkard, who became a key figure in the Harlem Renaissance. Haven’t heard of him? You’ve heard his most famous composition: “Sweet Georgia Brown.” And then there’s current musician and saxophonist Maceo Parker. It’s an undiscovered gem.

An Irish surname name, nothing else sounds quite like Maguire. Alternate spellings abound, but this seems like the most common.

This is the Biblical long form of Micah; it’s unisex in the Old Testament. That potentially puts it in the company of Isaiah and Elijah and so many similar Biblical boy names parents have embraced in recent years.

Some surname names feel rough and tumble – think Hunter and Ryder. Others are smooth, like Spenser, Foster, and yes, Mercer.

Merit means worthiness; we earn merit awards. You can “merit” consideration or a promotion. Merritt, however, is an English surname, probably referring to a boundary gate. Despite the unrelated origins, the surname picks up a virtue name sheen thanks to the vocabulary word. And that makes Merritt a very modern possibility.

Miro comes from the Latin mirus – wonderful. Sculptor Joan Miro makes it artistic. With so many o-ending boy names finding favor, Miro isn’t such a leap from Milo.

A place name, Montana feels rugged and strong. An earlier generation might have heard this and automatically thought Hannah. Their parents probably heard it and thought Joe. But with the Nickelodeon series and the football hero receding, Montana might make a great place name possibility.

Polished and sophisticated, Montgomery sounds like a little gentleman. Or a grown-up one; after all, Montgomery Clift had a successful Hollywood career, earning four Oscar nominations. Monty makes the name friendly and approachable. With long boy names like Sebastian and Everett in the Top 100, Montgomery could fit right in.

What are your favorite boy names starting with M? 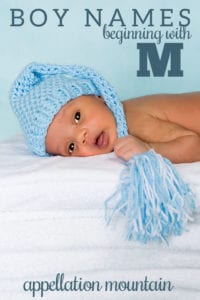 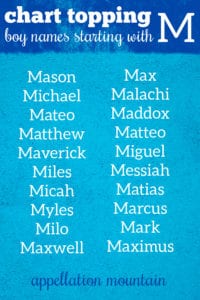