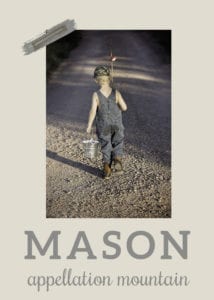 The baby name Mason transformed from a fast-rising trend to a solid citizen in just a few years.

If the baby name Mason strikes you as a trendy newcomer, here’s a surprising fact: the name has always charted in the US Top 1000.

Yup, every year from 1880 right up until today.

Granted, the name hovered in the 400s or higher for most of those years. But it still lends this name far more history than, say, Ryan – at least in the US.

Like so many surnames, Mason started out as a job title.

From the pyramids of Egypt to medieval castles and cathedrals, stonemasons have shaped – literally – many of the landmarks we know best. It’s a job that dates back to the earliest civilizations, stretching at least 10,000 years into the past.

The fraternal organization known as the Freemasons traces their history to the medieval guilds formed for artisans way back when.

Like Carter, Hunter, and other surnames, it’s not surprising to find it as a first name occasionally. But starting in the late 90s, this name took off.

Jason – a mythological name for the hero who sailed the Argo – became a chart-topper in the 1970s. While it never reached the heights of Jennifer for girls, Jason spent all of the 1970s and much of the 80s in the US Top Ten.

Along with Brian and Kevin, Jason helped usher in a generation of two-syllable, ends-with-n boy names. Names like Justin, Brandon, Evan, and Jordan also rose in the same era.

Mason, too, climbed in the 1980s, fueled by a similar sound.

A seventeenth century border dispute between the Pennsylvania and Maryland colonies resulted in a legal case and a massive land survey.

Charles Mason and Jeremiah Dixon conducted the survey from 1763 to 1767.

It ultimately came to symbolize the divide between the northern and southern US – though it’s not really southern immediately south of the Mason-Dixon Line. After Pennsylvania abolished slavery, it also served as a border between the states, though again, it wasn’t a hard and bright line. Delaware sits north of the Mason-Dixon Line, but retained slavery until the passage of the Thirteenth Amendment.

For what it’s worth, the surveyors themselves were English.

Still, Mason reads just slightly Southern, almost certainly thanks to the boundary. Characters have been named Mason Dixon in movies like Rocky Balboa and Attack of the Killer Tomatoes. It’s referenced in novels, song lyrics, and even Bugs Bunny cartoons.

Of course, the baby name Mason was long familiar to everyone as a surname.

Television attorney Perry Mason appeared on the small screen from 1957 to 1966. (HBO brought the detective back in a new series in summer 2020.)

A handful of other famous figures answered to the surname. But how ’bout as a first?

In 1968, Mason Williams released “Classical Gas.” You’ve almost certainly heard it, even if you can’t place the name. It won multiple Grammy Awards, has been covered by countless artists, and became the intro music for various news programs, along with other broadcasts. It featured in movies, including Cheaper by the Dozen.

And the baby name Mason leaped in the rankings between 1968 and 1970. But it didn’t really take off for a few more years.

A short-lived Perry Mason revival ran from 1973 to 74, and singer Dave Mason recorded a handful of hits in the late 70s. (1977’s “We Just Disagree” is among the most famous, but he’s probably better known as a member of Traffic and Fleetwood Mac, among others.

The S.E. Hinton novel Tex might also get credit. Published in 1979, Matt Dillon starred in the movie version in 1982. Dillon played Tex, younger brother to the responsible Mason. Hinton’s books were a sensation, so it’s possible that kids who grew up reading them have made Mason a hit.

Or maybe it’s down to soap operas. In 1984, Santa Barbara introduced us to handsome, wealthy Mason Capwell. It tracks closely with a big jump in births from 1984 to 1985.

Two television werewolves have answered to the name: one from The Wizards of Waverly Place and a second from The Vampire Diaries.

Since the mid-1990s, celebrities including Melissa Joan Hart, Ne-Yo, and Cuba Gooding, Jr. have named their sons Mason.

The most famous Mason of them all might be the eldest Kardashian grandchild, Mason Dash Disick, son of Kourtney Kardashian and her ex, Scott Disick.

From Keeping Up With the Kardashians to social media to countless tabloids, the next generation of reality show royalty is growing up in the public eye.

With an upbeat, approachable sound, it’s easy to understand the name’s appeal. It works for a child or an adult, an athlete or an accountant.

Other surname names for boys abound if you’re after something less expected. But Mason is a solid citizen, a boy name that feels current, and just slightly traditional.

Would you consider the baby name Mason for a son?

Image by Lorri Lang from Pixabay 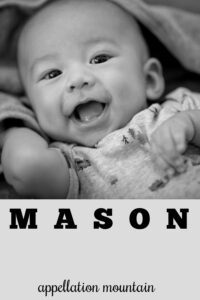