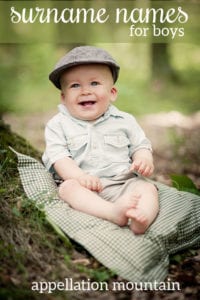 Jackson and Mason. Hunter and Carter. Surname names for boys dominate the US popularity charts.

And why not? It’s a great way to find a name that feels both traditional and unexpected. A surname name often strikes a balance between the fresh and the familiar.

They can be rich with meaning, too. Choosing family surnames is a great way to honor an entire branch of family at once. And, since surnames appear all over the map, some of these might prove meaningful place names, too.

These 25 surname names for boys are all catching on fast, rising in the US popularity charts over the last several years. Some might feel familiar, but none of them are wildly popular – yet.

NFL quarterback Baker Mayfield took this name from rising possibility straight into the US Top 1000. It appeals for so many reasons: the -r ending of Parker and Cooper, the bright ‘a’ vowel sound, and, of course, the athletic prowess of Mayfield. And while many surname names aren’t tied to current occupations – how many Sawyers do you know who saw wood? – the image associated with this name feels wholesome and authentic.

The name of a Texas university known for football, Baylor takes its name from minister, politician, and judge R.E.B. Baylor, one of the school’s founders. Once, the surname might’ve referred to someone who delivered goods. Today, it picks up on former favorite Taylor and rising choice Saylor. Built-in nickname Bay brings to mind other water-related names, like River and Kai. And unlike Taylor and Saylor, Baylor is far more popular for boys.

A preppy surname name, Boden benefits from the Bo sound. After all, we love Bodhi, Bode, Bowen, and Beau, to name just a few. But it’s also in the spotlight because of Johnnie Boden, the British entrepreneur who turned his surname into a brand. Known for bright prints and a specifically English sensibility, Mini Boden is especially popular for children, though you can outfit the entire family in the company’s designs.

Boone comes from the same root as our word bonus, and the French word bon – good. Meanings don’t get much better than that. But Boone also offers a rugged, Americana vibe. That’s down to frontiersman Daniel Boone, a historical figure turned folk hero during his own lifetime. A 1960s television series helped cement the image.

Brooks feels buttoned-up – think Brooks Brothers – but also down-to-earth – think Brooks & Dunn. It’s the original preppy hellraiser name, at-home in a blue blazer or hiking boots. If you’re after something slightly outdoorsy, Brooks could be the name. It’s also a masculine successor to 1990s favorite Brooke, which might make it a possible honor name, too.

An upbeat Irish surname, Callahan joins longer last name picks like Sullivan and Donovan in the US Top 1000. Easy nickname Cal makes it even more wearable. It’s a reader favorite, and might even join long-time chart-toppers like Cameron in the Top 100 … eventually.

Crew comes with a split personality. It’s a rebellious, wrecking crew of a sound. But it’s also a gentleman’s sport and the inspiration for J. Crew. When famous design family Chip + Joanna Gaines welcomed their fifth baby in 2018, they named him Crew – and raised this name’s profile dramatically.

For years, there was Cole. Then came Colton. But now the surname name of the moment is Colson. Credit to celebrated author Colson Whitehead for at least some of the increased attention to the name. But it also marries Cole with Mason and Jackson, for a name that’s current and just a little different. Plus, there’s Agent Phil Coulson, a staple in Marvel productions going back to 2008’s Iron Man.

Short and complete, Ford means a shallow place where a body of water can be crossed. (Or the act of crossing that body of water.) But it feels less like a nature name, and more a part of Americana. Not because it’s a presidential surname name – though it is – but because Ford cars and trucks, from the Mustang to the F-150 are so very familiar.

Looking for names that sound edgy and cool, but still retain a certain traditional sensibility? Hayes is one of the surname names for boys that hits the mark. Fresher than Hayden, Hayes feels like a familiar choice. And yet, the scissor-y ‘z’ sound is all sorts of cool.

Lots of -ley ending names go to the girls, but the first syllable of Huxley reads masculine. Think Huck – and in Finn. There’s also General Hux, a Star Wars universe bad guy, played by Domhnall Gleason in the last three movies. And, of course, Huxley can refer to the famous British family including author Aldous and scientist Thomas. It’s a cool sound with links to pop culture and history, too.

A generation of Jennifers grew up, married Matthews and Joshuas, and chose surname names for boys like Mason. Jensen fits with that style, plus it has the same syllable that defined a generation. Actor Jensen Ackles, of Supernatural fame, likely helped boost the name.

Judson could come from several names: mostly likely Jordan, but anything that might’ve shortened to Judd. It substitutes nicely for Jackson or Hudson, and sounds exactly like a stylish, but not invented, boy name for this generation. No surprise to see that Judson is slowly gaining in use.

Lawson sounds like the new sheriff in town, but really, it means son of Lawrence. Reality television’s Lawson Bates has helped boost the name, but really this one succeeds on sound. It’s an alternative to all of those chart-topping surname names for boys, from Mason to Landon – at least for now.

Layton rhymes with Clayton and Peyton, and that could make it a logical choice for a child today. It’s also spelled Leighton – though that seems like a spelling headache. So far, Leighton trends feminine (thanks to Leighton Meester), while the   the -ay version is far more popular for boys. Either way, it feels modern, but not invented.

The tragic 2008 death of Heath Ledger raised interest in his surname. It falls in the same category as Hendrix: parents probably admire the famous figure – or at least don’t mind the tie. But the name succeeds on sound, too – a mix of Ridge and Bridger. Another bonus? It appears as a given name in the Middle Ages, too.

It brings to mind boxer Lennox Lewis – and maybe Lenox China, too, since the name is popular with boys and girls alike. It’s a Scottish place name, probably referring to elm trees. But once again, it’s a great sound that boosts Lennox. In this case, that ending ‘x’ puts it in the same class as favorites like Maddox, Hendrix, and Knox.

Miller feels humble and homespun, a solid working name. It also picks up on so many of our favorites – Miles and Milo for boys, Mila and Millie for girls. While Miller Brewing Company might give some pause, it feels like less of an issue for the 2020s than it might have been in an earlier era.

Shepherd makes a gentle, occupational surname name. The image of tending flocks of sheep also brings to mind religious imagery and language. Depending on your worldview, Shepherd might feel like a subtle Christian choice, too. It works for families regardless of beliefs, a name that’s instantly familiar, but far from common.

Stetson sounds like a cowboy name. Way back in 1865, John B. Stetson panned for gold in Colorado, but made his fortune from the distinctive hats he crafted during his travels. They’re now a hallmark of Western style. That makes this names sound rough and tumble, a cool surname pick for a kid at home on the range.

Back in the day, a thatcher was a roofer, working with straw. Today that’s only a thing in the Three Little Pigs. (Okay, and the 2001 movie A Knight’s Tale.) But today it feels preppy and polished, a name at home in a blue blazer and boat shoes.

Turner has been on the fringes ever since we first met Orlando Bloom’s character in the first Pirates of the Caribbean movie, way back in 2003. Bloom played Will Turner in four movies. The popular character, combined with our love of -r ending surnames, makes this a natural choice.

After a sky-high debut, Watson continues to climb. It fits with our love of -son ending names, plus Watson belongs to Sherlock Holmes’ sidekick. With so many popular remakes of the detective stories, Watson is ready for discovery. It comes from the medieval nickname Walt, so Watson means son of Walter.

Wells has it all – it’s a surname name, with a hint of the natural world, and maybe even a little bit of virtue built-in. (Think “wellspring” of good health or similar.) All together, that’s why Wells has become one of the hottest boy names of our moment.

Wilder came out of nowhere, debuting in the US Top 1000 in 2016. It feels both rugged and outdoorsy, and buttoned-up and boardroom. That dual nature gives Wilder broad appeal, the kind of name lots of parents can embrace. It’s edgier than William, but not as wild as Maverick.

What are your favorite surname names for boys? Would you consider any of these for a son?

Originally posted on March 9, 2020, this post was revised and re-published on October 29, 2020. Names that left the list: Case and Marley. Names that joined the list: Callahan and Miller. Additional updates took place on August 30, 2021. 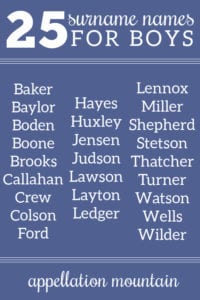 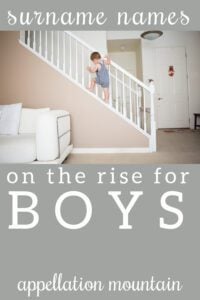