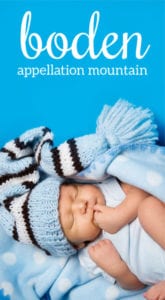 Thanks to Elizabeth for suggesting our Baby Name of the Day.

This name sounds like a surname, and sure enough, it is.

There’s more than one origin and meaning attached:

Or Boden could be the Anglicized version of a Gaelic name, or maybe even a cousin to Baldwin – a French form of the name was Baudin. Take your pick!

But it’s not surname status that puts this one on our radar.

It’s our love of all things Bo.

The various spellings and forms suggest even more origins and meanings. There’s the legendary singer David Bowie, skiing champ Bode Miller, all the spiritual meanings of Bodhi, and handsome Beau. That just scratches the surface.

Compared to all of these names, Boden remains relatively uncommon.

And yet, nearly every parent recognizes this one.

That’s thanks to British clothier Johnnie Boden, and the mail-order company he founded back in 1991. The London-based company makes clothing for babies to adults, but it’s best known for brightly colored kids’ clothing featuring fun prints. It’s heavily identified with all things British.

It’s also pretty accessible, closer to Gap Kids than Gucci. I think that’s another point in favor of the name.

Despite history as a surname, Boden debuted as a given name in the US in 1987, with just seven births. (If you’re keeping track, that’s a few years before the brand launched and more than a decade before it came to the US.)

Overall, Boden feels fresh and modern, but also preppy and buttoned-up. It counts as a cool name, but not so cool that it’s tough for a real kid to wear.

If you love Bo, but want something slightly longer for your son’s formal name, this is one to consider.

What’s your favorite Bo name? Would you consider Boden for a boy? 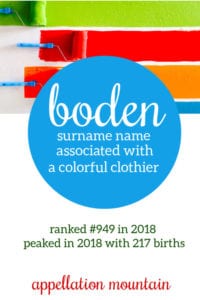