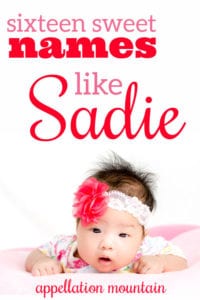 Sadie rocketed into the US Top 100 back in 2013. It’s bright and sparky, a retro nickname name right at home in the twenty-first century.

Ever since Sadie caught on, retro nicknames have risen in use. Some of them started out as diminutives for formal names. Others come from different backgrounds. But they all share the same breezy appeal.

Here are the names that substitute nicely.

We love a good nature name, including avian picks like Wren. And so not only is Birdie among the names like Sadie, it fits right in with Willow and Violet and Jade, too. Jessica Simpson recently named her youngest Birdie Mae; Busy Philipps is also mom to Birdie Leigh. It could be short for Elizabeth, or maybe Bernadette. But in the age of Sadie, it’s easy to imagine that Birdie might stand on its own.

The Scottish word for pretty, the name peaked in the US during the 1940s. It’s cousin to the Spanish bonita and the French bon. Famous Bonnies abound, but most belong to a different era. Lawless Bonnie and Clyde; iconic television mom Ann Romano from One Day at a Time, played by Bonnie Frankin; singers Raitt and Tyler all come to mind. More recently, there’s a Vampire Diaries character, and, of course, the little girl who inherits all of Andy’s toys in the Toy Story series. The child is named for Bonnie Hunt, an actor known for several voice roles in the Disney-Pixar universe. Since the series has become a childhood staple, it might appeal to more parents who grew up with the beloved characters.

Current US popularity rank: #127 (for girls)

Boy names on girls remain ever controversial. At the moment, Charlie reads nearly unisex – about 2200 girls and 1800 boys received the name in 2020. But it also feels confidently feminine, maybe because we have such a long history of using it, as a feminine nickname and given name. The 1970s gave us Charlie, the fragrance. Charlie was a man, but Charlie’s Angels? All women. So was Stephen King’s Charlie – really a Charlene – in Firestarter and the teenager in 2018’s Transformers movie, Bumblebee. It claims the same sassy strength as Sadie.

At first glance, Daisy is nothing like Sadie. It’s a flower name, more of a complete choice than sweet diminutive. And yet, the two names share the same sounds – just swap the D and the S. Plus, Daisy can be short for Margaret, which makes it more like Sadie-for-Sarah. Another factor? Like Sadie, Daisy peaked in the late nineteenth century. Though it’s risen in use dramatically in recent years, and isn’t too far outside of the Top 100, I’ll still suggest it as an alternative – though one that you’re still likely to hear on another girl.

Edie doesn’t seem very different, maybe because we hear modern Eden and vintage Edith with some frequency. But Edie fails to crack the current US Top 1000, which makes it fairly rare – and perhaps an even better substitute for the popular Sadie. Lots of longer names can shorten to Edie, but I think it stands alone quite nicely, which makes it a perfect parallel to the chart-topping Sadie.

Ellie could make this list, but it’s more popular than Sadie. Instead, how about Elsie? Lauren Conrad gets the nickname from her initials – LC – but others have answered to the name in full, including Zooey Deschanel’s daughter, Elsie Otter, and plenty of actors, athletes, and other women of accomplishment. It feels gently vintage, just like Sadie, but with plenty of spirit, too. It’s risen in use every year since 2015, but not in a dramatic, flashy fashion. Instead, Elsie seems like the girl next door, the kind of name that you expect to hear – even if it’s not terribly popular – yet.

Current US popularity rank: #593 (for girls)

Like Charlie, there’s a history of girls answering to Frankie. At least some of them have Frances or Francesca on their birth certificates, but others are just Frankie, in full. That number includes Drew Barrymore’s younger daughter, as well as a handful of high profile celebrity kids. Netflix’s Grace and Frankie gives us Lily Tomlin as Frances-called-Frankie. It’s a good reminder that while this name seems relatively uncommon, it’s tough to gauge how many families might be using it as a nickname. It’s a boy name, too, of course, but interestingly, just Frankie fails to crack the current Top 1000.

Originally short for Harriet, this is another nickname name that’s far outpaced its formal version. Tori Spelling gave the name to a daughter in 2011, and it also featured in the documentary Babies, about how children are raised around the globe. It ranked in the US Top 100 from the late nineteenth century into the 1910s – making it more popular than Harriet back then, too. Now it’s back, and rising rapidly.

This name touches on two trends: like Bonnie, it simply means pretty. In this case, Jolie is the French word, edging it closer to word names like River and Grace. But it’s also a Hollywood surname name, as in Jennifer-inspired Anniston or throwbacks like Harlow and Monroe. That’s thanks to Angelina Jolie. For both reasons, and on sound alone, Jolie succeeds. It’s fresh and modern, but not invented. Another name in this category: the upbeat, jovial Jovie.

Josephine remains slightly more popular than the nickname version, but odds are that lots of those girls answer to Josie, too – meaning this name could feel more popular than you might guess. Joe is a solid citizen, a regular guy. But Josie feels different – lighter, brighter. It’s retro and zippy, a name high in energy and yet rooted in tradition. Josie is the feminine form of playful Joey, exuberant and youthful, but somehow not unreasonable on an adult.

Lately Lane has become a go-to choice for boys. And while Lane – and Laine and Layne – could lean unisex, it’s Laney and Lainey that rank best for girls. They pick up on so many long-time favorites, from traditional Elaine to modern Delaney, and yet they don’t feel tied to any single formal name, either. Laney – with or without the ‘i’ – stands alone.

In Scottish, Margaret became Mairead, and Mairead shortened to Maisie. American parents tend to find the Maisie-Margaret connection a little more tenuous, and so we tend to view it as a stand-alone name. Henry James gave us the novel What Maisie Knew; there’s a series of detective novels starring Maisie Dobbs; and young actor Maisie Williams also comes to mind. Lucy Cousins named her children’s book mouse Maisy, while Dr. Seuss spelled it Mayzie. But it’s Maisie that remains the logical member of the names like Sadie society.

No doubt, Millie feels spunky and modern. There’s a Broadway musical turned 1967 movie starring Julie Andrews in exactly that role: Thoroughly Modern Millie. With easily a dozen or more formal names, from Amelia to Millicent to Camille, it’s the kind of name that feels like a nickname – only we’re not agreed on for what, exactly. Just like Ellie and Sadie and Molly, Millie has seemed like an independent choice in recent years, an on-trend sound with a vintage vibe and energy to spare.

Tens of thousands of girls were named Sophia or Sofia last year, but it’s Sophie that shares Sadie’s breezy style. It’s not actually short for Sophia; instead, Sophie – like Julie for Julia and Lucie for Lucia – is the full French form of ends-in-a names. Still, Sophie feels far more familiar as a result. It could still be the perfect compromise between, well, Sophia and Sadie.

A long-time darling amongst name fans, Sylvie teetered on the edge of the US Top 1000 for a few years, but now seems to be moving up. It’s a little bit like Ava and Ivy, with makes the name feel fresher than midcentury Sylvia might sound. Like Sophie, Sylvie is French and complete – no formal name required.

Jimmy Fallon made waves when he named his daughter Winnie, inspired by the lake where he and his wife vacation. (That’s New Hampshire’s Lake Winnipesaukee.) Of course, Fallon – along with a whole generation – grew up with Winnie Cooper on The Wonder Years. Plenty of reasons suggest that this name could be huge, and yet, so far, Winnie remains off the radar. It’s less mouse than Minnie, and could be short for everything from vintage Winifred to modern word name Winter. 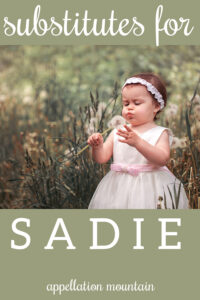