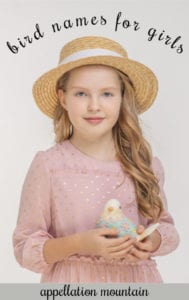 Bird names for girls range from mainstream favorites to names with avian meanings that we barely even realize, to bold rarities that don’t quite seem like names.

But every one of the bird names for girls on this list could work for a daughter, though some might be safer as middles.

They fit in nicely with our passion for word names, particularly those drawn from nature. With Willow and Luna, Lily and Autumn in the current girls’ Top 100, it’s easy to imagine how bird names fit in.

Relatively few of these were in use prior to recent years, at least not in English. But many of them have roots and meaning that go back centuries.

So amateur ornithologists of the world, unite! Let’s explore the rich and varied bird names for girls.

This Top Ten favorite doesn’t necessarily fit with bird names for girls. Except that the Latin avis means bird, and is similar-ish to Ava.

After years in style, Mavis made a quiet comeback. Credit not a bird, but a bat – a vampire bat. It’s the name of the adorable daughter to Count Dracula in the Hotel Transylvania series. But it’s also another name for the song thrush, or in Old French, the mauvis. A late nineteenth century novel introduced the idea of Mavis as a given name, and it became a popular choice in the 1920s and 30s.

Phoebe means bright. The name of a moon goddess in Greek mythology, it’s also the everyday name for a type of bird, native to the Americas.

While Phoenix is more popular for boys, it appears in the girls’ Top 1000, too. While this bird is strictly mythological, it’s served as a powerful symbol of rebirth for millennia.

Big in the 1990s, young actor Raven-Symoné put her nature name on the map. It’s rising again today, both because of our love for nature names and the great middle ‘v’ sound. Edgar Allan Poe’s famous poem made the bird literary, but also a little bit dark.

A traditional nickname for Robert, Robin became a Top 100 pick for girls from the 1950s into the 1970s, the age of Susan, Karen, and Sharon. But it can work equally well in the company of Maren, Eden, and Evelyn.

We tend to think of Tori as a Victoria nickname. But in Japanese, Tori can mean bird, depending on the kanji used to write the name, and several other meanings are possible.

The only nature name I’ve ever written on a birth certificate, Wren continues to soar. It entered the US Top 1000 in 2013.

Lately, Birdie feels like a name to watch. Some raised an eyebrow when actor Busy Philipps welcomed Birdie Leigh in 2008. And Birdie might be short for Elizabeth, Bernadette, or another name with a strong B sound.

Lark seems like a logical choice for a bird-inspired baby name. Mia Farrow chose it all the way back in 1973. Jennifer Connelly and Paul Bettany welcomed Agnes Lark in 2011.

Parents fell for gender-neutral Merle in the 1910s and 20s. It comes from the Old French word for blackbird, from the Latin merula.

Artist and pacifist Pablo Picasso was the first, but others have followed his lead, giving their daughter the Spanish name for dove. Paloma Picasso became a noted jewelry designer, possibly inspiring more parents.

The large, flightless bird, cousin to the ostrich, might not immediately inspire parents. But Rhea is also a goddess, mother of Zeus himself. The bird was named for the mythological mom in the 1750s.

Intrepid namers Nicole Richie and Joel Madden chose this name for their son, Sparrow James Midnight, but it works just as well for a girl.

The French word for skylark feels familiar to many thanks to the children’s song. (Fair warning: the lyrics are all about plucking the bird for roasting.) It’s a pretty sound, with the Lou sound suggesting some easy nickname options.

Like Ava, this name is likely Germanic in origin. But because of the Latin avis, it’s long been associated with birds.

Another Welsh import, Bran means raven, and the -wen comes from gwen – fair.

You might think of a celandine as a flower – and it is! But it derives from the Greek word for a swallow.

A sorceress who tangled with Odysseus on his wanderings, we think of Circe as a powerful sorceress. But the name comes from the Greek kirke – which might have meant bird.

A Late Latin name, Columba referred to the dove, a symbol of holy spirit. Favored by early saints, both male and female, Columba eventually became the (exclusively male) Callum. Colombe in feminine in French.

In Hebrew Dror means sparrow – or freedom – and Drora or Derora is a feminine form.

A very literal bird name with peaceful overtones, Dove might be another of the bird names for girls on the verge of going mainstream.

Another dove name, Jemima comes from Hebrew via the Old Testament. She’s one of Job’s daughters. Puritan parents embraced the name, but in the US today, it’s mostly syrup.

Another literal bird name, a kestrel is a type of falcon. It’s uncommon, but the sound is intriguing.

Laraline comes from a Latin word meaning seagull. It doesn’t have much history as a given name, but like many of the other rarities on this list, it could wear well.

A linnet is a type of finch. Linnet might also be a form of Lynette, which could be a form of Welsh myth’s Eluned, or possibly a nickname for Lynne.

In English, the bird is called a golden plover – and I’d guess that Plover is a non-starter as a given name. Loa is the bird’s name in Icelandic. Sound-wise, it falls somewhere between Lola and Noa, and could wear surprisingly well.

A nightingale name that fits right in with our affection for Lucy and company.

Like some names on this list, it might feel more pratical as a middle name. But Nightingale undeniably belongs with the birds. It’s a hero name, too, thanks to world-changing nurse Florence.

In Greek myth, Philomela was turned into a nightingale, and that’s what her name means. It comes from the Greek words for “love” and “song.”

From the Sanskrit for myna bird, Sarika seems completely surprising and yet perfectly accessible.

There’s a Sephora selling cosmetics in every shopping mall in America. But Sephora started out as an Old Testament name. It comes from a Hebrew word meaning bird.

Borrowed directly from the birds, it also brings to mind Silence of the Lambs’ unforgettable FBI Agent Clarice Starling.

Twilight’s Bella and Pirates of the Caribbean’s Elizabeth both answer to this surname. And why not? They’re gorgeous birds with a fierce reputation – possibly a winning combination for a daughter’s name. Not into Swan? There are plenty of related names to consider.

This sounds like an active name, and indeed, the 100 or so species of swifts are among the fastest-flying birds in the world. The adjective came first – it’s from Old English. It could be an intriguing middle name possibility. As a first, it might be too Taylor.

A greenish-blue color, Teal comes from the feathers of a duck.

Another form of Sephora, one that skews closer to the Biblical original, Tzipporah.

Which bird names for girls are missing from this list?  Would you consider any of these names for a daughter?

This post was originally posted on July 6, 2012. It was substantially revised and re-posted on October 2, 2015 with a very happy seventh birthday to my daughter, Claire Caroline Wren – usually known as Clio, and sometimes Wren Bird. Additional updates took place on May 18, 2020. 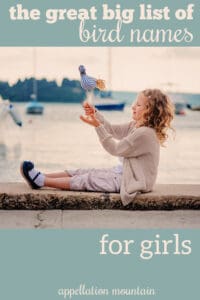