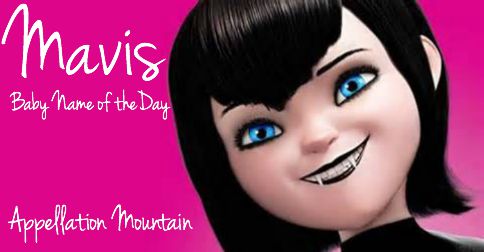 This post was originally published on May 17, 2010. It was substantially revised and re-posted on September 18, 2015.

She’s the adorable vampiress at the heart of the Hotel Transylvania movies.

Thanks to Elle and Urban Angel for suggesting Mavis as our Baby Name of the Day.

Mavis: Stylish in the 20th Century

Mavis made waves in the early twentieth century.

Credit goes to author British Marie Corelli. She was probably the first to use this as a given name. Her 1895 bestseller The Sorrows of Satan told of  penniless writer tempted with riches. The hero ultimately chooses simplicity – along with the love of a good woman, Mavis.

The novel was a bestseller, and Mavis debuted in the US Top 1000 that same year.

DW Griffith made a movie version in 1926. Carol Dempster played the virtuous female lead. By then, the name had risen to #280. Names like Mae and Mabel were firmly established favorites for girls in the era, so Mavis fit right in.

Mavis: A Name That Soared

The song thrush is also known as the throstle and the mavis. The name comes from the French mauvis. The bird has an appealing song, and is much referenced in poetry – possibly Corelli’s inspiration.

Plenty of women were given the name from 1895 through the 1960s, including:

The name must have been fashionable in Asia in the 1970s.  Singers Mavis Fan of Taiwan and Mavis Hee of Singapore both wear the name. 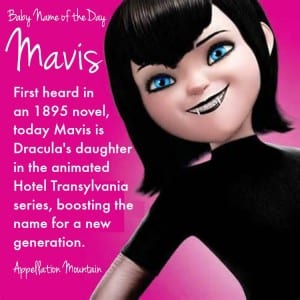 In 2012, we met the residents of Hotel Transylvania. Count Dracula built the hotel after his wife was killed by an angry mob. It’s a safe place for monsters of all kinds, and it’s the setting for Drac’s daughter’s 118th birthday bash.

Mavis wants to see the world, but Drac’s overprotective. But then human Johnny stumbles into the hotel on the eve of the big party, and sparks fly between the two.

Since the 2012 release, Mavis has gone from obscure – just 43 girls given the name that year – to revival-ready.

It isn’t just Hotel Transylvania boosting the name, though a young Mavis has definitely helped.

The name also shares sounds with chart-topping Ava, and up-and-coming Maeve. Plus the ‘s’ sound ending is heard in lots of vintage charmers, from Alice to Frances.

Possible nickname Mavy – used by Drac in the film – has quite a bit of appeal.

If you’re looking for a vintage name that’s on the cusp of revival, Mavis is one to consider.

What do you think of Mavis? Is this name ready for revival?