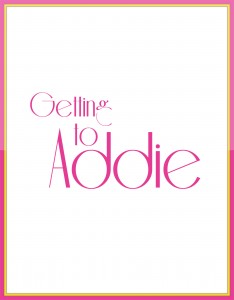 Editor’s note: This post was originally published on February 9, 2008, and was substantially revised and republished on August 13, 2012.

A few years ago, every little girl seemed to be answering to Maddie, whether it was Madison or Madeleine or something else on her birth certificate.  Today, we’ve dropped the M, and the most dominant sound on the playground is Addie.

There’s no shortage of attractive appellations that can lead to this friendly nickname.  Whether you’re after a popular pick or an obscure one, there’s something to suit any parent who likes the idea of having a daughter answer to Addie.

Addison – In 2006, Addison ranked #27.  By 2011, she was up to #13.  That’s not counting spelling variations: Addyson, Addisyn, and Adyson all rank in the US Top 1000.  She was already on the rise when the popular Grey’s Anatomy character appeared on the small screen, and the rest is history.

Adair – A surname name derived from Edgar, Adair feels wearable for a girl, thanks to references like the ill-fated Virginia Dare and Dead Like Me’s Daisy Adair.  She’s a surprising alternative to Addison and company.  Actress Adair Tishler played a recurring character on the NBC sci fi hit Heroes.

Adelaide – Back in 2005, Adelaide returned to the US Top 1000 after more than five decades’ absence.  Today she’s climbed to #407.  Not only does she lead to the stylish Addie, Adelaide is also a place name.  The South Australian metropolis was named after the nineteenth century Queen Adelaide, wife of William IV of England.  With other regal and saintly bearers of the name, she’s rich with history and prime for revival.

Ada – A logical successor to Mia and Ava, Ada is a sweet, short, complete name that could lead to Addie as an affectionate nickname.

Adelina – If you’re torn between Olivia and Adeline, this elaboration is a great compromise.

Adele, Adela, Adelia – The Grammy-award winning singer has boosted her given name back  into the US Top 1000.  The ends-in-a version has yet to return to use, but remains a possibility.  Adelia is also seldom heard, but would serve as a hybrid f Adele and Amelia.

Adelais – Sometimes listed as a French variant of Adelaide, the softer “s” ending might appeal, and, of course, is far less common.

Adelie – A French form of Adele, and the name of a type of penguin.  The Antarctic bird got its name from Adèlie d’Urville, the wife of French explorer Jules Dumont d’Urville.  Sure to be confused with Natalie and Hadley, but a stylish possibility anyhow.

Aderet – I found this one on a search, said to be from a Hebrew word meaning cape.  It is probably the rarest of the names on this list, but her sound appeals.

Adalia – Another Hebrew name, this one borrowed from Bible – and from the boys.  Adalia is another form of Adlai, but seems better for a daughter in 2012.  You might also arrive at Adalia as an elaborated form of Ada or Adela.

Adina – She has a similar story to Adalia – another masculine Old Testament name used for girls in recent generations.  It is easy to imagine inventing Adina – or Adinah or Adena.

Adesina – If you’re searching for a moniker with African flair, this Yoruban rarity might be the one.

Aderyn – A modern Welsh nature naming meaning bird, Aderyn fits in with Addie and all of those other avian appellations so in vogue.

Adilet – I’m fascinated by this rarity, listed as a gender neutral Kyrgyz name meaning justice.  It’s also the name of a political party in Kazakhstan, but that’s probably obscure enough that Adilet could wear well in the US today.

Caridad – The Spanish answer to Charity, it’s a virtue name that would typically shorten to Carrie in American English and Dadi in Spanish – but could work with Addie, too.

Ariadne – She saved Theseus from the Minotaur in the maze, but has never been popular with American parents.  In our Chloe/Zoe/Penelope age, there’s no reason to think Ariadne couldn’t fit right in.

Adriana, Adrianna, Adrienne – All three are feminine forms of Adrian, each with their faithful adherents.  Sound-wise, getting to Addie is something of a stretch, but the letters are right there.

Would you ever use Addie for a daughter’s name?  If so, which formal version would you use?  Are there any I’ve overlooked?