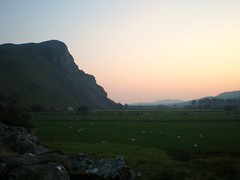 Addie is everywhere, short for everything from the boyish Addison to the vintage Adelaide.  Here’s another one that would lead comfortably to Addie, a name both rare and intriguing.

Thanks to Marie for suggesting Aderyn as our Baby Name of the Day.

No sooner had I agreed to cover Aderyn than she appeared over at British Baby Names.  Elea described her as “a lyrical Welsh nature word-name with bouncy syllables.”  Well said.

Speaking of syllables, how do you pronounce Aderyn?  My default was something like Adelyn, only with an r sound substituted for the l.  That’s not quite right.  The emphasis is on the middle syllable: ah DER in.  You can hear her pronounced here.

This presents a challenge.  When it comes to true rarities, I often think that you can cheerfully opt for a non-standard pronunciation.  But Aderyn is the Welsh word for bird, and it seems better to stick with the original pronunciation in this case.  Whether that’s possible in the US is another question.  She was given to fewer than five girls in 2011, so parents have avoided the question.

Elea detailed Aderyn’s usage in the UK.  The first Aderyn was born back in 1900, and the name has caught on steadily since then.  As with many a once-marginalized language, reclaiming names is an important part of embracing cultural identity.  Whether it is the Basque Iciar or the Welsh Aderyn, parents are looking for possibilities that reflect their heritage.

Aderyn is actually pretty rare in Wales, too.  Parents could be inspired by Craig yr Aderyn – Bird Rock – a large hill in Wales’ Snowdonia National Park known as a nesting place for many types of birds, including the Great Comorant – hence the name.  A number of literary works also bear the name.

So if you’re after a Welsh heritage choice with ties to the natural word, Aderyn’s credentials are impeccable.  But I think she could be safely imported to the US for parents with fewer ties to Wales, too.  Consider:

Overall, Aderyn is a daring choice that feels very modern and yet has legitimate roots.