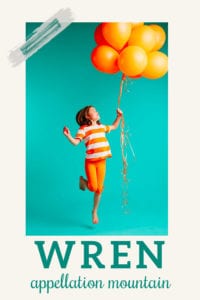 The baby name Wren has transformed from well-why-not nature name to high-flying favorite.

Thanks to Katharine for suggesting our Name of the Day.

The baby name Wren moves from the wilds to the nursery with grace and style.

A wren is a songbird. Various wren cousins live all over the world. They’re smallish in size, but their songs can be surprisingly loud and complex.

The bird was known as the wrenne in Middle English and the wrenna or wrænna in Old English. It can be traced back to the Germanic werna and variations appear in Old Icelandic, too.

While Wren feels like a restrained, even humble name, it also sounds just like reine – the French word for queen. Fitting, because this creature is sometimes known as King of the Birds.

Aristotle wrote of a contest amongst all the birds to determine their leader. It was decided that he who could fly the highest would earn the crown. It looked like the eagle would win handily. Except that a clever little wren hid in the proud eagle’s plumage. At the last minute, he soared ahead on his own, and the title went to the wren instead.

The fable survives, but the bird changes over the centuries.

It sometimes appears as a surname.

Some families probably earned the surname thanks to an ancestor’s small size. It’s also possible that the surname has nothing to do with the bird; it might come from an Irish name meaning spear. You might see “descendant of Rinn” listed as a meaning, a reference to this origin.

And then there’s a theory that Wren comes from the Welsh personal name Uren, which could be cousin to all of those Old English origin antiques, like Everard, which mean “boar.” Which is still an animal reference, but a very different kind.

Perhaps the most famous bearer of the surname was Sir Christopher Wren. A celebrated architect at the turn of the eighteenth century, we count St. Paul’s Cathedral in London among his masterworks.

Regardless of the name’s origins, we think of the baby name Wren as a small bird. We can’t picture them as easily as, say, parrots or eagles, but it’s still an immediately familiar reference.

The baby name Wren doesn’t appear as a first until very recently. There are a very small number of them over the years, with a dozen or so annually beginning in the 1980s and 90s.

You might also think of The Ren & Stimpy Show, the Nickelodeon cartoon about a chihuahua and a Manx cat.

Or maybe you think of Footloose, and the rebellious-dancer Ren, played by Kevin Bacon in the 1984 original and Kenny Wormald in the 2011 remake.

But they’re both Ren, hold the W.

Maybe they come from surnames like Reynolds or even Renner. And Ren is a masculine Japanese name, too. Wren and Ren can also serve as unexpected nicknames for classic Lawrence.

Fans of Pretty Little Liars might think of this name as male. After all, recurring character Wren Kingston – medical student, love interest for Spencer, and occasional villain – answers to the name. The series ran from 2010 through 2017, which coincides with a rise in the first name Wren’s growing popularity as a boy’s name.

One more intriguing idea: Wren might serve as an honor name for Catherine. Or even a nickname.

It centers on twin sisters Cather “Cath” Avery and Wren Avery. As the story tells it, the girls’ parents hadn’t realized they were expecting twins. They planned to name their single daughter Catherine. When two babies arrived instead of just one, they split the full name Catherine into Cather and Wren.

While it’s not a perfect match, the sound is there.

The baby name Wren is the twenty-first century equivalent of Fern. It’s spare and simple, but with plenty of strength, too.

Wren falls somewhere between Claire and Daisy. It feels feminine, but not frilly. And while the connection to the natural world is clear, Wren isn’t exactly used in everyday speech.

It makes a great middle name alternative to Grace and Rose, and there’s no question that the baby name Wren wears beautifully as a first name, too.

What do you think of the baby name Wren? Do you like it better as a middle or a first? 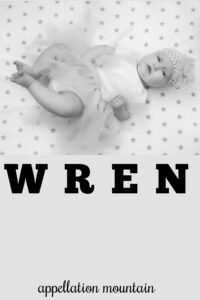 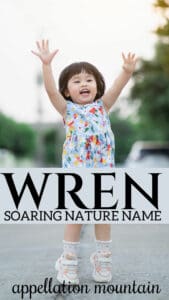