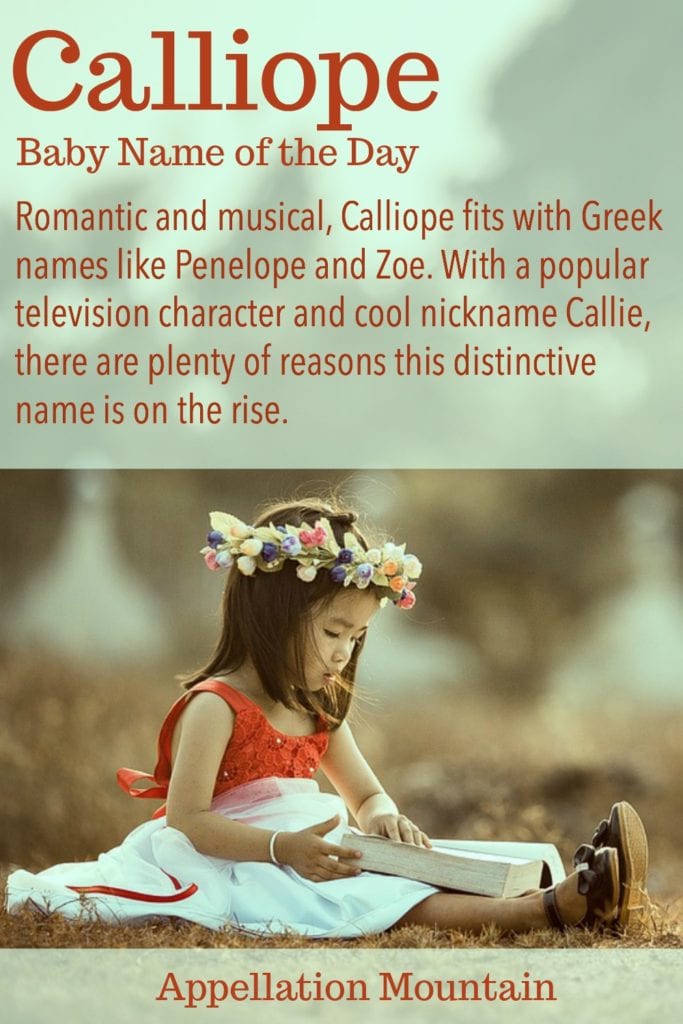 Count Calliope among those ancient names that feel fresh and modern today.

We love musical names, from tried-and-true Melody to newcomer Aria. Calliope fits right in. In Greek, kallos means beauty, while ops refers to voice. This name translates to “beautiful voice” – just perfect for a singer.

Back in the 1850s, inventor Joshua C. Stoddard dreamt up a new-fangled contraption meant to replace church bells. He gave it this musical name. The new-fangled music maker became a staple on river boats, carousels, and with the circus. Of course, those old-school calliopes could be loud, even shrill, which slightly shifts the way some the name. But I think it leans slightly vintage Americana.

In modern Greece, this name is spelled Kalliopi, and the pronunciation is slightly different, with an ‘ee’ instead of an ‘eye’ sound.

Fun fact: at least a few of those Kalliopis prefer the nickname Poppy.

But most Americans probably think of antiquity. Calliope belongs to the Muses, the eldest of the group of goddesses responsible for art, literature, and the like. Homer credited her with inspiring the Iliad and the Odyssey. She turns up in other tales, and has several sons, including Orpheus and Linus.

Both the Roman Catholic and Eastern Orthodox churches acknowledge a saint by the name, too.

We know little about her life, but the story goes something like this: she rejected a pagan suitor or three. The authorities stepped in after one jealous suitor reported her. Calliope faced torture, and eventual death, at their hands.

The saint explains the name’s ongoing use, even as many of the other Muses’ names have faded into obscurity.

The smallest bird found in the US answers to this name; it belongs to the hummingbird family.

A 1980s television show took this name; so have several ships of the Royal Navy.

But the most notable appearance of this name occurs on the small screen.

Grey’s Anatomy introduced Dr. Calliope Iphigenia Torres during season two. She appeared on the long-running series from 2006 through 2016.

Another reason this name is rising? Credit Penelope, Zoe, Chloe, Phoebe, and all of those ends-with-e girl names so much in favor today.

Despite so much history, this name never appeared in the US Top 1000. Not until 2016, with the popularity of those Greek girls’ names reaching new heights.

It helps that Callie, Kali, and most of the other spellings rank well in the current US Top 1000, too.

Overall, that makes this name a promising alternative to Penelope and her sisters. If you love this style, but want something less expected, this name could be for you.