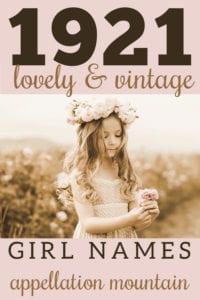 A century ago, Mary sat the top of the charts.

No surprise there – the name had been #1 since the beginning of the rankings, in 1880, and would continue to hold that spot for more than another two decades. But it’s still interesting to look at the Top Ten, a mix of names we’d expect to see there – Elizabeth! – plus a few surprises.

Favorite 1921 girl names are the ones that ranked in the Top 100 back then – and we still love them today. Classic Alice and vintage June prove the one-hundred year rule: typically, names cycle in and out of fashion over the course of a century. That means that your grandparents’ names sound dated. But your great-grandparents? They inspire namesakes galore.

Then there’s another group of 1921 favorites, names that parents embraced back then. But now? They’re languishing in style limbo, never mind the rules about fashion.

The hottest 1921 girl names might be the most intriguing. They represent names that rose in use dramatically from 1920 to 1921. Some continued to climb. Others remained rare – and that’s true even today. But they’re names at least slightly outside of the mainstream – then and now.

Step into the time machine, and let’s go back to the names I would’ve been blogging in 1921.

MOST POPULAR GIRL NAMES OF 1921

Regal and saintly, Mary was long the go-to name for girls. Compared to more recent chart-toppers, like Emily or Sophia, Mary was far more common.

1921 marks a spot after L. Frank Baum published his first of the Oz stories, but before he’d finished the series. Judy Garland, who played Dorothy in the 1939 Wizard of Oz movie, wasn’t even born until 1922. But Dorothy was flying high in the era.

Tailored and traditional, Helen feels fresh and surprising today, but would’ve been an everygirl name back then.

Impeccably classic, Margaret has trended in and out of use over the years. Lately it looks like Margaret is headed for a return to the Top 100.

Will the passing of Supreme Court Justice – and pop culture icon – Ruth Bader Ginsburg help propel this name back to the top of the charts? Even without the towering historical figure, there are reasons to think Ruth is ready for revival.

We adore place names, even state names like Georgia. But somehow, Virginia is stuck in days gone by. It’s gently vintage, nickname-rich, and has plenty of potential.

We’re wild for Millie, and formal name options abound. But Mildred teeters near obscurity these days.

This Elizabeth nickname has had a long and successful run as a stand-alone name. With the newest Ryan Reynolds-Blake Lively daughter and a Taylor Swift song, could Betty be ready for a comeback?

Lady-like and frills-free, Frances feels like a sister for Evelyn, an alternative to Alice. Nicknames Frankie and Franny transform the buttoned-up name into a sparky, upbeat choice.

One of the few truly evergreen girls’ names, Elizabeth has always ranked in or near the Top 25. (Technically, Elizabeth slipped to #26 twice in the 1940s.)

We loved spare, storybook Alice in 1921. And it’s still going strong today, a classic with history to spare.

The little girl at the heart of The Nutcracker, Clara manages to feel vintage and demure and adventurous and twenty-first century ready, all at once.

You might argue that Edith feels relatively obscure by today’s standards. That’s fair. And yet, this Downton Abbey name has nearly doubled in use over the last decade, suggesting that Edith’s revival might be only slightly delayed.

Glancing at the numbers suggests that Evelyn is a perpetual favorite. Not so! The tailored name plummeted in use beginning in the 1950s, and only began a long march back to the top in the 1990s.

Joseph is a quiet, if likeable classic. Josephine is high-spirited, a traditional choice with some serious dance moves. And yet, it manages to stay just on the right side of sophisticated, too.

With an appealing meaning – light – a Beatles song, and a short, complete sound, Lucy appeals for so many reasons – then and now.

We love color names. Scarlett tops the charts now, but equally-red Ruby isn’t far behind. And while Scarlett is (mostly) a twenty-first century phenomenon, Ruby qualifies as a vintage gem.

Not so long ago, Stella was old enough to move to Miami with The Golden Girls. The name exited the US Top 1000 entirely during the 1980s. But now starry Stella is back, and more popular than ever before.

Vintage Violet is the name of the dowager Countess of Grantham on Downton Abbey – in other words, it’s an aged name even on a series that starts with the sinking of the Titanic. But this flower name powered by the letter V feels exactly right for a child born today, too.

Traditional Agnes fails to make an appearance in the current Top 1000, despite the clock telling us that Agnes is ready for a comeback.

A mini name, Ida could follow Ava and Ada straight up the popularity charts … but so far, has remained in style limbo.

A French place name? That ought to fit right in, smack between Savannah and Genevieve. Plus, nickname Raine feels pretty much perfect.

The French form of Margaret, Marguerite shares most of the same nickname options, but with a slightly more sophisticated sound.

A medieval form of Margaret, the spelling influenced by the herb marjoram, Marjorie seems like a candidate for a comeback … soon-ish.

An impeccable name from the Bible and American history, Martha is the perfect alternative to names like Audrey and Amelia. It’s brief, complete, and with story to spare.

A surname ending with -ley, worn by a major celebrity? That sounds like the making of a hit name. And it was, back when Shirley Temple was still a cherubic child star.

We’re wild for Thea, and Theodora is on the upswing. Could other starts-with-Th names, like Thelma, be next?

Musical, Shakespearean, and rare – so many reasons to make the name Viola a logical successor to sound-alike Violet.

A sparky nickname name, Arlie sounds like Charlie without the Ch, Arlene with a fresher ending.

A pan-botancial possibility associated with jazz singer Blossom Dearie, as well as a 1990s sitcom.

As tailored and French as Josephine, but far less familiar.

Gloria Swanson was set to become a major star during the 1920s, taking her name along for the ride.

A name with a strong meaning and plenty of history, Justine wasn’t exactly a household name circa 1921. But it still felt more common a century ago.

Maybe the numbers hide a few Libbys – then and now – as it is typically a nickname for Elizabeth. But in our age of Lily and Abby, Libby feels overlooked today.

At first, Magnolia sounds like a flower name embraced by inventive twenty-first century namers, eager to move beyond Violet and Rose. But Magnolia has bloomed before, making this more vintage revival than innovative nature name borrowing.

With Stella, Ella, Bella, and friends so high in the US rankings over the last two decades, it’s hard to believe that we’ve skipped right past vintage Nella.

It sounds like an elaboration of Rose and Rosa, but not so. Instead, Rosia probably comes from the Latin Roscius – dew.

A Spanish import, Socorro means relief – or succor – in Spanish. It has a modern, edgy sound, but remains rooted in tradition. One of the Virgin Mary’s many titles is Nuestra Señora del Perpetua Socorro – Our Lady of Perpetual Help.

Zelda Fitzgerald cements this name in the Jazz Age, but a long-running video game series, as well as that zippy first initial Z, pull Zelda right into the 2020s.

What are your favorite 1921 girl names? 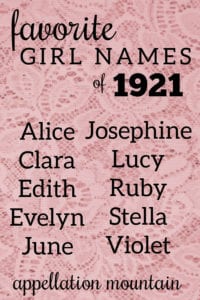 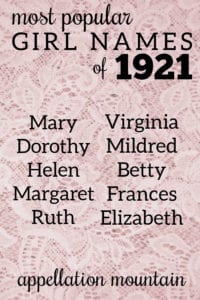 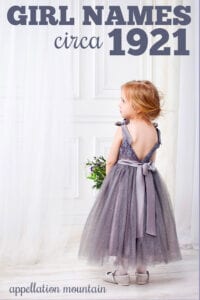