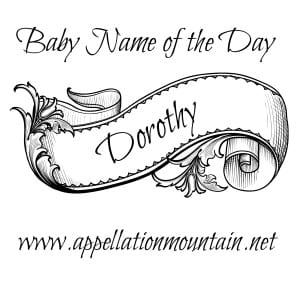 This former favorite went over the rainbow as a Kansas farmgirl, and retired to Miami in the 1980s.

Thanks to Jennie for suggesting Dorothy as our Baby Name of the Day.

Does Baum get credit for her rise?

Probably some.  A few years earlier, a comic opera titled Dorothy had premiered in London in 1886, and toured widely in the English-speaking world.  Plus, Dorothy was in the Top Ten and rising rapidly when the novel debuted.

But Baum’s book was a hit, quickly adapted for Broadway in 1902, and inspiring more than a dozen follow-up Oz novels.  But Baum’s heroine was likely named after a real girl.  Frank’s wife Maud was inconsolable after her niece died in infancy.  The girls’ name?  Dorothy.  Evidence abounds that Baum freely borrowed from his own life events and acquaintances throughout the stories.

Besides, the name wasn’t new in 1900.  Far from it.  Two early saints answered to Dorothea, from the Greek doron – gift – and theos – god.  Both women are considered virgin martyrs, but Dorothea of Caesarea was particularly popular in the Middle Ages.  Another Dorothea, born in Prussia in the 1300s, would also be considered a saint.

As for the Dorothea-Dorothy switch, chalk it up to medieval English, when Latin names like Cecilia became Cecily.

Plenty of aristocratic Dorothys appear in England over the centuries, and famous bearers of the name include:

By the time The Golden Girls debuted in 1985, it was no surprise to hear one of the retirees named Dorothy Zbornak.  The character was born around 1929 – prime time for the name.

She slipped over the years, falling out of the Top 100 after 1961 and leaving the Top 1000 early in the twentieth century.

In the UK, stores called Dorothy Perkins have sold women’s wear since 1919.  Elmo’s pet goldfish was given the name when the “Elmo’s World” segment debuted on Sesame Street in the late 1990s.  On a similar note, The Wiggles performed with a dancing dinosaur by the name.  For a time, Dorothy simply wasn’t a name for your daughter.

But her hiatus has been brief.  By 2012, she was back to #922 in the US.  Credit our enduring affection for three-syllable, ends-with-y names for girls, or maybe her status as a near-classic.  Today she feels like a sister for Alice or even Emma, another literary heroine with history to spare.

With nicknames ranging from the cutesy – Dolly, Dot, Dodie – to more sophisticated possibilities – Dora or even Doro, maybe? – she’s a versatile choice.

If you’re looking for something retro, slightly less serious than Eleanor, far less common than Abigail, Charlotte, or Sophia, with a built-in Halloween costume idea, then Dorothy is one to consider.