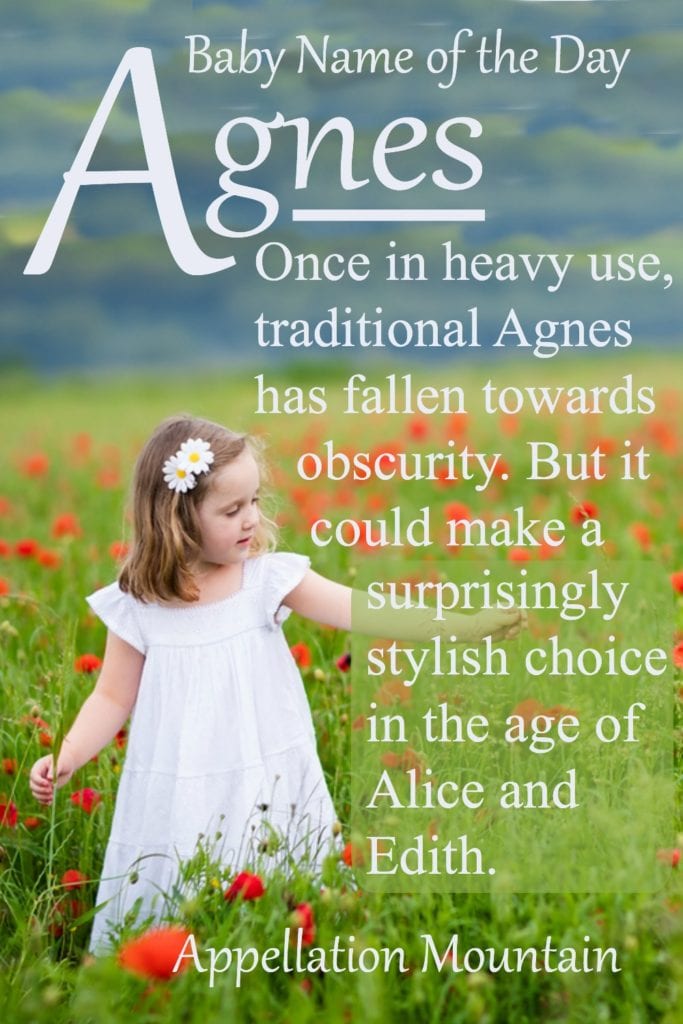 Once upon a time, Agnes seemed as ordinary as Emma is today.

Believe it or not, in sixteenth century England, you were almost sure to meet an Agnes. Only Elizabeth and Joan consistently ranked higher.

Variants abounded, like Annis and Agneta, and even the Spanish Ines surfaced in the same century.

The name derives from the Greek hagnos, or holy or chaste.

The first famous Agnes explains the many that followed. A virgin-martyr, she died under the Diocletian persecutions in Rome in the early 300s.

Her story goes like this: born into a wealthy family and courted by many eligible bachelors, she chose instead to devote her life to prayer. A rejected suitor reported her to the authorities. Grisly and horrific punishments followed, along with miraculous escapes – though she eventually died at the hands of an army officer in charge of her execution.

The stories remained popular over the centuries, and the saint was held up as a worthy role model. A folk tradition developed, too. Because she’s the patron saint of young girls, custom holds that praying to her on the eve of her saint’s day would help them discover their husbands. Or, as John Keats wrote, “Bonny Agnes, let me see, The lad who is to marry me.”

No surprise, then, that plenty of famous women followed, including:

Dozens more women appear in the historical record, including nobles. Three more saints from the Middle Ages also answer to the name.

In plenty of artistic renderings, Agnes has a little lamb.

Between the popular saint and the Latin phrase, this name felt quite Catholic back in the day. During the Reformation, Protestant parents rejected it in favor of newer names. It would be centuries before the name regained popularity.

Remember the John Keats poem mentioned earlier? He told the story of Madeline, a young woman dreaming of her beloved. There’s a Romeo and Juliet-esque undercurrent to the tale.

The name has hovered in style limbo for ages. Just 189 girls were given the name in 2015 – but that’s up from a  mere 59 a decade earlier. With names like Alice on the rise, and the possibility of Aggie succeeding Abby and Maggie, this name feels ready for revival.

After all, Despicable Me named the three sisters Margot, Edith, and Agnes. Margot is back and Edith shows signs of climbing. Can their sister be far behind?

Do you think Agnes feels fresh and ready for revival?

This post was originally published on February 11, 2009. It was substantially revised and reposted on August 15, 2016.