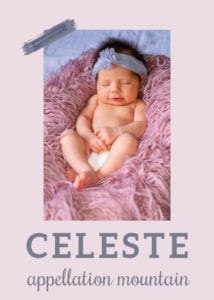 The baby name Celeste hits a sweet spot – it’s familiar, but not too common. Add in elegant style and a great meaning, and this could be a great name for a daughter.

This name sounds antique, and that tracks. We need to go back to the ancient world. The Latin caelestis means heavenly.

Caelestis and Caelestinus were used as personal names in late Latin, but the history books usually list them as Celestine. Popes – five of them – answered to Celestine between the 400s and the 1200s.

Feminine forms like Celestia, Celestria, and Celestina occurred, too.

Born in 1600, Virginia Galilei grew up as the eldest daughter of world-changing astronomer Galileo Galilei. She took religious orders while still in her teens. Virginia adopted the name Maria Celeste, honoring both her faith and her father’s calling.

The name’s dual connection to the heavens and the night sky persisted over the years. In 1801, French astronomer Jerome Lalande and the staff of the Paris Observatory published Histoire Céleste Française, a major star catalog.

And so the baby name Celeste carries a dual meaning: both scientific achievement and spirituality, balanced in two short syllables.

First, a celesta looks a little like an upright piano. It’s a late nineteenth century and early twentieth century instrument. You’ve probably heard it in Tchaikovsky’s “The Dance of the Sugar Plum Fairy” in The Nutcracker. The celesta offers a magical, enchanted sound.

If you know your opera, there’s “Celeste Aida” – heavenly Aida, from the famous Verdi opera.

There’s more. The voix celeste – heavenly voice – is an organ stop. And Celeste de Longpré Heckscher composed her own works in the early twentieth century.

TURN OF THE CENTURY

The baby name Celeste appears in the US Top 1000 from 1880 – the first year for which data is available – right up through today.

A handful of references from the late 1800s and early 1900s include:

In 1872, the abandoned ship Mary Celeste was discovered floating in the Atlantic. Despite being seaworthy and well-supplied, the crew abandoned ship. The mystery commanded headlines – both in 1872, and in subsequent years. Theories and tales appeared steadily into the 1920s; it still turns up on historical sites and shows today.

If you visited the 1900 World’s Fair in Paris, you would have seen Le Grand Globe Céleste – a theater showing a movie of the solar system, in the shape of a giant sphere.

Maybe that’s because we’re lacking a fictional – or real – Celeste to put this name on parents’ radar. It spiked in use briefly after Six Figures Under gave the name to a character during the fourht season, taking the name to #204 in 2004.

You might think of Celeste, the elephant queen and wife of Babar, from Jean de Brunhoff’s children’s books.

And The Originals/Vampire Diaries also featured a character by the name.

The baby name Celeste is pronounced with two syllables in English. That’s true for French and German, too. But say it in Spanish or Italian, and it’s three syllables – the final ‘e’ makes an ‘ay’ sound.

Either way, Celeste feels polished. It’s a pretty name, but far from frilly. It fits with French names for girls, like Genevieve and Madeleine. But unlike those names, the baby name Celeste seems stuck in style limbo.

That might make it the perfect opportunity: a great meaning, a host of intriguing associations from opera to the heavens, and a tailored, but delicate sound.

The baby name Celeste fits in and stands out – making it the compromise choice many parents seek.

Would you consider the baby name Celeste for a daughter?