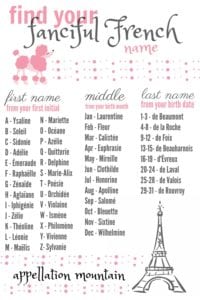 Want proof? Every generation claims at least a few favorites. Some, like Genevieve and Josephine, feel like they’re imported directly from Paris. Others, like Julie and Elaine, seem less distinctively French – but their roots are undeniable.

One more piece of evidence? This post has long been among the five most popular lists at Appellation Mountain!

Read on for a discussion of past French names for girls in favor in the US, and some très chic, très français ideas for a nom de fille today.

And if you’re looking for even more French names, be sure to visit Méilleurs Prenoms, my go-to site for French baby names.

A few notes: I’ve omitted diacritical marks throughout most of this list. It’s a difficult call. They’re misspelled without them. And yet, if you use these names in the US, it’s likely many official forms will omit them. My suggestion? If you’re comfortable with the idea that sometimes Anaïs will be just plain Anais, don’t worry about it. But if it bothers you? It might be better to choose a different name.

Secondly, for rare names, I’ve tried to provide some guidance about how to pronounce them. This isn’t necessarily the way you’d hear them in France; I’m aiming for a reasonable approximation of what non-French speakers in the US would probably say.

Most of those names remained in use, and many climbed the charts during the Baby Boom. They were joined by:

Today’s parents are likely to answer to French names like:

French Names for Girls: Neglected Possibilities A to L

These names all feel nicely French and mostly undiscovered. For even more fanciful options, see the Find Your Fanciful French name graphic above.

Anaïs – Thanks to writer Anais Nin this name feels slightly familiar in the US.  A form of Anna, it’s pronounced ah nah EES.

Capucine – You wouldn’t name your daughter Nasturtium, but translate it to French, and Capucine has potential. It’s the name of a famous French model and actress from the 1960s. In the US, it might be confused for cappuccino, but it’s pronounced kap uh SEEN.

Chantal – A place name and saint’s surname, Chantal also resembles chant, the French word for song. It saw some use in the US in the 1980s and 90s, but quickly faded.

Élodie – A long time favorite on the site, Elodie is the French form of Alodia. It’s never recently entered the US Top 1000, and with sound-alike Melody in use, it could wear well.

Eulalie – The French version of the Greek Eulalia feels spirited and unexpected. It could shorten to Lally.

Françoise – I’ve heard that Francoise is quite dated in France today. And yet, Francis names all feel like they’re on the upswing in the US. It sounds something like frahn SWAHZ, but it’s a challenging name for non-French speakers.

Lilou – Lily names are white hot in the US, so how about Lilou? It might be cousin to Lily, but it owes its popularity to 1997 sci fi movie The Fifth Element.

Maëlys – This is one of several feminine forms of Mael, a Breton saint from the fifth century. It’s pronounced something like MAH eh liss. Maēlle is another option.

Noémie – Naomi and the Italian Noemi rank in the current US Top 1000, but the French spelling does not.

Océane – River is big in the US, but in French-speaking countries, it was the word for ocean that made waves.

Salomé – A Biblical girls’ name, Salome is heard in many languages. But it’s been in the French girls’ Top 100 recently, so it feels like a fit for this list.

Sidonie – At peak Sidney, Sidonie might have confused. But maybe it works today? It’s not related to Sidney. Instead, it comes from an old Latin name from the city of Sidon, in Phoenicia.

Solange – Another saint’s name, Solange looks like a smoosh of sol – sun – and ange – angel. But it actually comes from a Latin word meaning religious.

Zélie – St. Zelie Martin was the mother of St. Therese of Lisieux. She and her husband, Louis, were canonized in 2015. That’s raised the name’s profile considerably. Combined with that zippy Z, it’s one of the most wearable rarities on this list.

I’ve taken some of the rarest of the rare names and put them together. Find your fanciful French name above!

What are your favorite French names for girls?