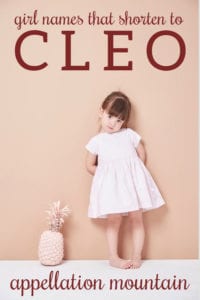 What, exactly, are Cleo names?

Recently returned to the US Top 1000, Cleo feels vintage and edgy. It’s a cool and sophisticated name, but a fun one, too. And with thousands of girls answering to Chloe, the similar-sounding Cleo feels like an obvious choice for a daughter now.

But if you’d like a few more syllables? Or maybe something that takes this rising star and makes it even rarer? Then Cleo names are your answer.

To be clear, Cleo requires no formal name. It’s complete as-is, and a very wearable choice in our age of Meadow and Monroe. It comes from the Greek kleios, meaning glory.

And it’s Cleo that has consistently most popular in the US, above even Cleopatra. It’s risen in use in France recently, but with the accent: Cléo. The name is also rising in use for baby girls in England and Wales, the Netherlands, and Sweden, to name just a few.

It’s also worth noting that Cleo started out as unisex, especially because many of these names – like Cleopha – also have masculine forms. And they’re not obscure, either – while the name has always skewed female in the US, circa 1900, a little Cleo could’ve easily been a boy.

Today, though, a baby boy named Cleo would be a surprise. Still, 19 boys received the first name Cleo in 2021. And a handful of men answer to Cleo as a nickname. Former Brazilian footballer Cleverson Cordova played for Red Star Belgrade in Serbia, as well as teams in China, Portugal, and his native Brazil. The soccer player was nearly always called Cleo.

Calliope isn’t related to Cleo, save that they’re both Greek in origin. But Calliope, which means beautiful voice, includes all the right sounds to shorten to Cleo. It has risen dramatically on the popular girl’s name lists over the last five years.

Likewise, Callisto is an unrelated Greek name. It means “most beautiful.” With the strong C, L, and O sounds, Cleo seems like a natural nickname.

We might shorten Clementine to Clemmie or Clem, but Cleo works, too. 1960s-era French painter Clementina Cote used the name; so did British jazz singer Cleo Laine, also born Clementina.

Names ending with -belle (and -bella and -bel) have been favorites in recent years. Cleobella is far rarer than Annabelle or Isabella, but it might wear well.

Originally spotted on blogger Cleolinda Jones, her name might be just about one of one. But as Cleo smooshes go, Cleolinda works.

Another well-why-not Cleo combo, this one inspired by the comment section – thanks, Blue Juniper! Luna is among the most popular names for girls right now, so pairing it with Cleo seems like a slam dunk.

You might know them as spider plants, but they’re also called cleome: clee oh me. Cleomie could be a slightly more phonetic spelling.

The daughter of a river god, Cleone was one of many nymphs mentioned briefly in ancient tales. Again, Cleonie could offer a more easily-pronounced alternative.

A combination of two Greek name elements meaning “glory” and “victory,” Cleonice could be a triumphant name. There’s a Cleonice in Aristophanes’ Lysistrata, way back in the fifth century BC, and another in an eighteenth century John Hoole tragedy. (Though Hoole was better known as a translator, rather than a playwright.)

Worn by multiple queens of the ancient world, this is best remembered as the name of legendary Egyptian ruler Cleopatra VII. She and Mark Antony were defeated by the future Emperor Augustus, though their daughter, Cleopatra Selene, survived. It means “glory of the father.”

And yes, the Egyptian queen’s name was shared by plenty of royals in her family, though she’s the one that dominates history and pop culture.

We tend to hear it as elaborate, maybe over-the-top, and it’s never been common in the English-speaking world. But, thanks to everyone from Shakespeare to Elizabeth Taylor, it’s never quite fallen out of use, either. It surfaces in the most unexpected places, too, like the Swiss-born German-Chilean Baroness Cleopatra von Adelsheim von Ernest, who married Franz Albrecht, Hereditary Prince of Oettingen-Oettingen. Or Cleopatra Higgins, who scored a pop hit in 1998 with “Cleopatra’s Theme.”

Now Israeli actress Gal Gadot is set to star in a new Cleopatra movie sometime in 2023.

A feminine form of the rare masculine name Cleophas, Cleopha and Cleofa aren’t often heard, but they certainly fit with Cleo names.

If you love Fiona and Josephine and Marie and Amelie, the rare French name Cléophée might appeal, too. The logical English pronunciation is Cleo plus fee at the end, though the French is a little closer to Cleo-plus-Fay. Toronto natives might recognize the name thanks to socialite Cleophee Eaton.

Cleora hugged the edges of the US Top 1000 in the late nineteenth and early twentieth centuries. Chances are it was an elaboration of Cleo inspired by Leora, also in use during the era.

It might be related to the Irish Cliodhna, but Cleouna’s exact roots are a mystery. It makes this list thanks to 1950s starlet and pin-up girl Cleo Moore, birth name Cleouna.

Clio-with-an-i is mostly just another way to spell Cleo-with-an-e, though a far less common one. It’s also associated with one of the nine Muses, the goddesses responsible for all things creative in Greek mythology. Clio was the goddess of history. Today, it’s also the name of an industry award to honor excellence in advertising. A handful of these names shorten more naturally to Clio-with-an-i.

We love Saoirse and Maeve, so why not Cliodhna? It’s pronounced clee oh NAH, nevermind that d-h combination in the middle. In Gaelic myth, Cliodhna was a goddess in love with a mortal. Things didn’t work out. In later tradition, Cliodhna’s is a banshee and a fairy queen.

Another spelling of the fairy queen’s name, possibly easier to pronounce in the US.

Cleo can easily be spelled with a K, too. The Greek Kleopatra is an option, too.

Theoclea is easy to unpack – it means “glory of God.” But it’s never been even a little bit common. An ancient Greek philosopher – circa the sixth century BC – answered to Theoclea. (Or maybe Aristoclea or Themistoclea?) Given the popularity of Theodore, Thea, and Theodora, Theoclea doesn’t seem like a stretch.

What do you think of Cleo names? Would you consider any of these? 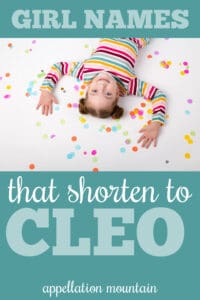 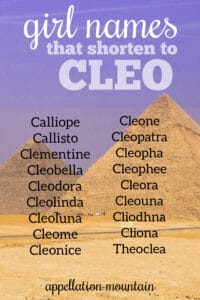