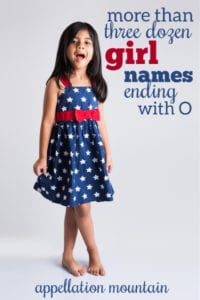 Looking for a girls’ name with an unconventional sound?  Want something feminine, but frills-free?  Here’s a possibility: choose one of the many girls names ending with O.

From mini names like Jo to nature names like Willow to vintage choices like the fast-rising Margot, there are girls names ending in O to suit any style. International options abound, especially if we include Japan. Surname name possibilities are rising fast, too, with Harlow, Marlowe, and Monroe all catching on in recent years.

It’s the golden age for parents considering girls names ending with o.  They’re more accepted, and more plentiful, than ever before.

Greek and Roman myth is are among the richest sources for girls names ending with O.  Some of the stories are better than others, but they all share one common trait – plenty of history.

Callisto – Calista Flockhart put her name on the map, but the ends-with-o version is valid for girls, too.  It means “most beautiful.”  Kallisto was a Greek nymph who caught the eye of Zeus and ended up as a constellation.

Cleo – Sometimes short for Cleopatra, the name of more than one queen of Egypt.  Cleopatra VII was the famous one, she of the kohl eyes and Hollywood biopic.

Clio – A cousin to Cleo, Clio was the Greek muse of history.  It’s said that she introduced the alphabet to Greece.  Like Cleo, the name comes from the word kleos – glory.

Echo – She met a tragic end thanks to a jealous Hera, but Echo’s sound is quite current.  A short-lived Joss Whedon series gave this name to its heroine.

Io – Two letters and still two syllables?  For a tiny name, Io packs a mighty punch. She’s another nymph changed into a creature after Zeus fell for her, and also the name of a moon of Jupiter.

Juno – Among the most wearable of the bunch, thanks to similarity to June and Juniper, Juno is the Roman name for the queen of the gods, Jupiter’s consort.

Hero – Yes, this name can be a lot to live up to.  But Hero appears in both Greek myth – she’s Leander’s beloved – and Shakespeare, where she’s one of the central figures in Much Ado About Nothing.  English popstar-turned-television-presenter Myleene Klass gave the name to her younger daughter in 2011.

Leto – You might not recognize this name, but Leto’s twins are famous:  Apollo and Artemis.  The similar Leta or Leda is another mythical figure.  I’m tempted to respell it Lido, but then that’s a deck on a cruise ship.

There are some great imported girls names ending with O.

Akiko – One of many Japanese girls names ending in o, thanks to the element ko – child. Other possibilities: Keiko, Kimiko, Mariko, and Tomiko.

Consuelo – Consuelo Vanderbilt was an American railroad heiress who married into the upper echelons of the English aristocracy.  Her Spanish name came from her Cuban godmother.  The name peaked in the 1920s.  Today it is part-import, part-virtue name – Consuelo means consolation and refers to a title of the Virgin Mary.

Isabeau – Can you import a name from medieval France?  Let’s say yes, because Isabeau really deserves more attention.  An all-but-lost form of Isabelle, it may not end with the letter O, but it’s the right sound.

Rosario – Actress Rosario Dawson made her unusual name famous, but it’s a traditional choice in Spanish. Rosario refers to the rosary, as in the Marian title Our Lady of the Rosary.

Socorro – A cousin to Consuelo, Socorro means help in Spanish. It saw some use in the 1920s, but today Socorro is nearly unknown in the US. It’s an unconventional way to get to Coco.

Looking for something truly daring?  This is the list for you.

Brio – I tend to think of Brio as masculine, but there’s no reason this musical term meaning “with spirit” couldn’t work for a daughter, too.

Cadeau – The French word for gift, and a different take on Kate and company.

Cielo – It’s the Spanish and Italian word for the sky and heaven.  In Spanish, it takes an s sound; in Italian, it is a ch.  Just like Sky, this name is gender neutral.

Coco – It’s not entirely clear where Gabrielle Chanel picked up her nickname, but it stuck – and is increasingly seen as a wearable choice for girls.

Lilo – She’s the BFF of adorable alien Stitch in the Disney flick-turned-series. She’s also Hawaiian, and in her native language, Lilo means lost. The similar Lilou has been stylish in France in recent years, but that’s a lu sound.

Marlo – Blogger Heather Armstrong has a daughter named Marlo. So does comedian Rob Corddry.  The original Marlo, Marlo Thomas, was born Margaret. Marlo was a childhood nickname that stuck. This name is catching on, but the surname spellings are far more popular.

Rio – Duran Duran sang “her name is Rio and she dances on the sand” back in 1982.  It’s the Spanish word for river.  Just like River makes for a nicely gender neutral nature name, Rio works for a son or a daughter.

Valo – This one is almost certainly on the map thanks to name blogs. The Finnish word for light, Valo brings to mind the words valor and valiant.  It’s a cheerful possibility for either gender.

Nature names and place names headline this category.  Borrowing from the dictionary and the atlas surfaces some intriguing options.

Doe – Doe can be short for Dorothy, or any name starting with Do. A doe is a female deer, too, which puts Doe in the company of Bear, Wolf, Fox, Lion, Hawk, and all of those bird names for girls.

Indigo – We think of blue as a color for boys, but Indigo feels like an interesting possibility for either gender, especially in the age of Blue Ivy.

Meadow – This gentle nature name was worn by television mobster Tony Soprano’s daughter a few years back.  It continues to be a possibility for for parents seeking a feminine but frills-free choice.

Shiloh – A Neil Diamond song, a fictional dog, and a Civil War battlefield = a stylish name for either gender. Thanks to the Jolie-Pitt crew, it is certainly wearable.

Sparrow – Bird names are a big category today, and Sparrow has seen some use for girls as well as boys.

Snow – Winter is white hot, so why not Snow? It’s also a Disney Princess name, as well as a color name and, sometimes, a surname, too.

Willow – The second of the girls names ending with O boosted by Joss Whedon, Willow went from fictional teenage witch sidekick to Will and Jada’s daughter. Now it’s a Top 100 pick.

Vero – A beach in Florida and a fresh spin on Vera.

Surname names are a big category these days, and many attractive options end with O.

Beau – Yes, I know. Beau if the French word for handsome, the masculine counterpart to Belle. It makes it tough to imagine a girl named Beau. And yet, there certainly are some, along with a few girls called Bo. It could be short for surnames from Beauchamp to Beauregard. It can also be found as a feminine name ending in a handful of nearly extinct names, like Christabeau and Isabeau.

Harlow – Starbaby-turned-starlet Nicole Richie gave this name to her daughter in 2008, inspired by yet another Hollywood star, Jean Harlow.

Kahlo – Mexican painter Frida Kahlo is a fascinating figure, and her last name could make a great artistic first name for a daughter.

Marlow, Marlowe – Take two parts Harlow and one part Mackenzie, and you’ll have Marlowe, among the fastest-rising surname name possibilities of the moment.

Monroe – Few legends shine as brightly as the late Marilyn Monroe. Singer Mariah Carey named her daughter for the Hollywood icon. While this one has history as a masculine given name, in recent years, it trends feminine.

Morrow – My first thought is legendary Edward R. Morrow, but it’s also an archaic, poetic term for the morning. That makes it part-surname name, part-nature name, and while it’s quite rare, it definitely belongs on this list of girls names ending with O.

It’s a tiny category, but there are at least two valid traditional possibilities, both girls names ending with o – though they’re both diminutives.

Caro – A short form for Caroline, Caro is a sparky spin on Cara.  But this one doesn’t quite stand on it’s own … yet.

Margot – The French Margot is a traditional short form of Margaret, making this the grandmama of girls names ending with o.  This is a vintage pick with a lot of style, also spelled Margo and Margaux. Unlike Caro, it’s easy to imagine Margot as an independent given name.

Would you use one of these girls names ending with O for a daughter?  Are there any that should be on this list? 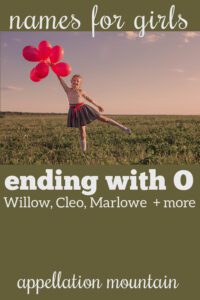