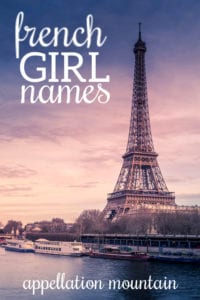 French girl names range from the so familiar we don’t notice them – think Nicole and Danielle – to current favorites, like Josephine or Claire.

Others, like Antoinette and Blanche, belong to another era. They’re French, but seem more like vintage choices than imports.

But overwhelmingly, French names for girls occupy a special spot for American parents. Many of them are accessible, but feel just a little different. They often read as sophisticated choices.

If you’ve followed names for years, chances are many of these French choices are on your radar already. Some might be new. And it’s worth noting that they don’t reflect the current Top Ten in France. A trip to Meilleurs Prénoms reveals that names like Emma and Alice occupy the most popular girl names in France … just like they do here.

Pronunciation will be seamless for all of the names in the first section. And while the less familiar French girl names might post some challenges, they all could work in American English, with a little bit of repetition.

Some of these might feel dated in France. Others might seem more French to Americans than they do to native speakers. But if you’re looking for something that says Paris, while you live in Pittsburgh? These names will satisfy.

The French form of Amelia, Amelie sounds a little closer to another American chart-topper, Emily. 2001 movie Amelie brought it to American parents’ attention, and it has ranked in the US Top 1000 since 2003.

Discovered in the US in the 1960s, Angelique recently left the US Top 1000. It tracks with our adoption of the English form of the name: Angelica.

Bernadette is in the early stages of a comeback. While masculine form Bernard is all German, Bernadette is the French feminine form. The image is reinforced by Bernadette Soubirous, the young woman whose visions at Lourdes became famous.

It’s the name Alexandre Dumas, fils, gave to a courtesan with a heart of gold in his 1848 novel. Greta Garbo played the part in a 1936 movie adaptation, earning an Oscar nomination. Camila ranks in the Top 20, but Camille also appears in the Top 1000.

Cecilia is popular in the US right now, but it’s far from the only form of the name. Trim and tailored Cecile is the French form.

Heavenly Celeste has always appeared in the Top 1000, but it’s never been especially popular.

A Top Ten favorite, Charlotte is heard the world over thanks to a fictional spider in a classic American children’s story, and a British princess. Despite this, Charlotte clearly evolved from the French pronunciation of Charles.

Claire comes from the Latin clarus – clear and bright. Chaira Offreduccio became an early follower of St. Francis, and she’s a saint in her own right, too. The Italian Chiara became Clara in Latin, Clare in English, and Claire in French – though Clara, Clare, and Claire all appear in the current US Top 1000.

Add an -ette to Nicole, and it becomes Nicolette. Drop the first syllable, and you’ll arrive at Colette. Impeccably French, but easily spelled and pronounced in English, Colette feels familiar, but not too common.

A favorite in the 1990s, Gabrielle is the French feminine form of the Hebrew Gabriel – God is my strength.

The patron saint of Paris, Genevieve is pronounced very different in French than in English. But it’s broadly familiar in the US, and Saint Genevieve is famous for protecting the city of Paris from an invading army in the fifth century.

We love a good Lou name, and Louise – the French feminine form of Louis – is among the most classic.

Lucille feels thoroughly American, thanks to the comic genius of Lucille Ball. But Lucille is a French form of the enduring and Latin Lucia.

Josephine combines the romance of the French Empire with a healthy dose of jazz age swing.

The name brings to mind Shakespeare’s star-crossed lovers, but -ette is also a favorite in French.

The most popular spelling of this name as of 2018 is Madelyn. But the more authentically French versions, Madeline and Madeleine, are heard in the US, too. The children’s storybook character spells it ending with -line.

Among the most classic of girl names, Margaret belongs to saints and queens. The same is true for the French form, Marguerite. While it’s familiar in the US, it’s seldom heard.

Strange but true: name your daughter Mary today, and she may never meet another girl her age with the name. That’s even more true for the French form, Marie.

Marion emerged as a Marie nickname in the Middle Ages, in France as well as England. Marianne also claims French roots. But Marianne makes this list especially because it’s the name given to the female figure serving as a symbol of the French Republic.

A Rose name with French roots.

Sylvia peaked in the US In the 1930s, and while it’s still used, it’s faded quite a bit from those heights. French Sylvie feels fresher and more stylish today.

The French form of Theresa, which comes from a Greek name meaning harvest. Saint Therese likely inspired some parents to choose the name.

Ever since the youngest Jolie-Pitt daughter arrived in 2008, parents have considered Vivienne. It’s still far less popular than the English Vivian, but a number of high profile birth announcements have kept it in the spotlight.

A cousin to Aimee, Amance means loving. It’s unisex, and several early saints answered to the name. However, it’s quite rare in France today.

Amanda topped US popularity charts in the 1980s. Amandine takes it in a different direction.

A rarity spotted in New Orleans, it’s possible Amenaide wouldn’t be heard in France itself. But it appears in a Rossini opera, and feels French in style.

Marie-Azélie was the mother of the future Saint Thérèse of Lisieux, and she’s now considered a saint in her own right. Azelie might come from the azalea plant, or it might be cousin to all those Adelaide names.

It sounds like coffee, but Capucine is a flower name.

Vintage, quirky Clementine is trending in the US.  French form Clemence remains obscure, but sophisticated.

If you’re looking for a formal name for Cleo less dramatic than Cleopatra, Cleophee might fit. It comes from the New Testament name Cleophas.

Another name that leans French thanks to pop culture, Cosette is the daughter in Les Misérables.

Another floral name, Delphine might also refer to dolphins … or the city of Delphi, in ancient Greece.

Mellifluous Elodie is a saint’s name, the French form of Alodia.

Faustine means lucky, and lately it’s been popular in France, peaking around 2010.

English-speaking readers will recognize Fleur, thanks to the Harry Potter heroine. But the French form of Flora – it’s literally the word for flower – isn’t often heard as a given name in the US.

A French staple in the 1940s, Françoise is rarely heard for children today. The pronounciation frahn SWAHZ might prove challenging, but easy nicknames like Frannie make the name feel casual and cozy.

A cousin to Giselle, though perhaps a tougher to wear version.

Virtue name Honor is heard from time to time, along with elaborations. Honorine is one of the French possibilities for a vintage virtue name.

Lilou relates to Lily, but it was Milla Jovovich’s character in the 1997 sci-fi flick The Fifth Element, Leeloo, that put this name on the charts.

We love Lou names. After all, Louise and Lucille are already on this list. For something more tailored and far more rare, there’s Lucy cousin Lucienne.

For an even rarer Lou name, there’s Ludivine. The feminine form of an obscure eighth-century saint’s name is rare in the US, and peaked in France back in the 1980s.

Maelle looks like a smoosh of Mae and Elle, but the French pronunciation is closer to ma ehl. The feminine form of a fifth century saint’s name, Maël means chief. Maëlie and Maëlys are also options.

If you learned French with Pierre Capretz’s famous French in Action series, you might know Mireille as the French college student who starred in the textbooks. It sounds something like MEE RAY and comes from a word meaning “to admire.”

The French form of Naomi makes for an appealing alternative to the Biblical original.

It looks like Ocean-with-an-e, but it’s pronounced oh say AHN, the French word for the sea.

Both feminine forms of Otto, Odette and Odile are characters from the ballet Swan Lake, made even more famous by the Oscar-winning movie Black Swan.

Severine sounds elegant and upscale, though it comes from the same root as the English word severe.

Sidonie comes from the ancient Phoenician city of Sidon. It sounds like another place name – Sydney, Australia. Or maybe English surname Sidney. But there’s an extra syllable in Sidonie that makes it a little different.

A ninth century saint’s name, Solange comes from the Latin term for solemn, as in religious. Some interpret it as sol – sun – and ange – angel. Singer Solange Knowles raises the name’s profile.

The French form of Victoria, Victoire is another name boosted by Harry Potter.

A French nickname for Isabelle, you might know it thanks to the 1960 Louis Malle film, based on a 1959 novel, Zazie dans le métro.

Short for Azelie, Zelie has trended in France and the US as well lately.

What are your favorite French girl names? Would you consider any of these names for a daughter?