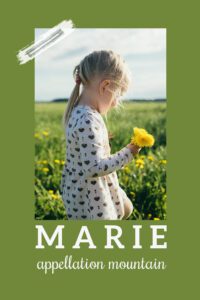 The baby name Marie hits a sweet spot – traditional, stylish, immediately recognized and yet seldom heard. At least, when it comes to a first names.

The baby name Marie belongs to the Mary family. And it’s a heavy hitter.

With a long history of use, countless international variations, and immediate recognition worldwide, Mary names are everywhere.

The Biblical Miriam or Mariam became Maria in Latin, and Marie evolved from Maria. Mary is the English form.

It brings to mind the Virgin Mary, mother of God. Maria tempts us to break into song, “I just met a girl named Maria …” or “How do you solve a problem like Maria?”

The baby name Marie seems distinctively different, too. It’s French, worn by queens and saints, an animated aristocat and a world-changing scientist.

Distinguished Maries are found across the centuries.

For example, in the twelfth century Marie de France wrote poetry in England. Her identity is lost to time, but many of her works endure.

Queens and other royals answer to Marie. Many will immediately think of the ill-fated Marie Antoinette, born Maria Antonia.

Swedish-Italian ballerina Marie Taglioni became a celebrated dancer in the nineteenth century. In fact, she may have been the very first ballerina to dance en pointe.

That’s quite a range of Maries, nearly all French-leaning and every one unforgettable.

Born Maria Skłodowska in Poland in 1867, the budding scientist began her studies in Warsaw. She left for Paris in her early twenties. Skłodowska earned her advanced degrees, and also married fellow scientist Pierre Curie.

In 1903, she and Pierre shared the Noble Prize in Physics for their work on radioactivity. Later, she earned the 1911 Nobel Prize in Chemistry on her own, for work discovering two new elements.

Marie Curie lends the name some intriguing depth, making it a hero name as much as a classic choice.

Irving Berlin’s song “Marie” was among his very first compositions. It became a hit, covered by dozens of artists over the years. Here’s Rudy Vallee’s rendition, circa 1929.

During the 1970s, Marie Osmond – born Olive Marie – co-hosted Donny and Marie. The Osmond siblings hosted an hour-long variety show for four years. Donny also recorded hits with his brothers in The Osmonds; Marie scored her own country music hit, “Paper Roses,” in 1973.

And if you need one more pop culture reference with musical overtones: Marie was sister to Berlioz and Toulouse in 1970 Disney animated classic The Aristocats. While you might not think of the feline-centered film as a musical, it included a number of original songs, including some from the legendary Sherman brothers.

And yet, the number suggest that Marie is almost rare as a given name. It’s certainly uncommon.

The baby name Marie substitutes for Charlotte or Elizabeth. It feels every bit as classic as Katherine, almost as brief as Grace or Claire.

And the name’s French lilt lends it some extra appeal, too.

What do you think of the baby name Marie? 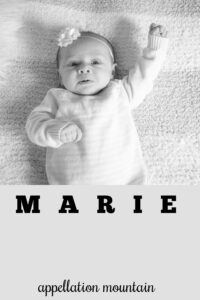