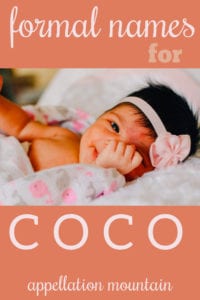 Formal names for Coco range from classics to literary rarities, from the names we all immediately recognize to ones that surprise and delight.

But formal names for cCoco double your options. There’s the sparky, French nickname name, but also something more.

Irish favorite Colleen has faded in recent years, but the sound remains.

Originally a feminine form of Nicholas, Colette feels tailored, French, and nickname-proof … unless, of course, you were inclined to shorten it to Coco.

Surname name Collins first gained attention from 2009 movie The Blind Side. (It’s the teenage daughter’s name.) Colin has become a modern staple for a son, but Collins tends to be used more for girls – opening the door for nickname Coco.

Back in 1877, William Vanderbilt named his daughter Consuelo in honor of her half-Cuban godmother. The heiress’ marriage to the Duke of Marlborough epitomized America’s glittering Golden Age. The name originates with a Spanish title for Mary: Nuestra Señora del Consuelo, Our Lady of Consolation. Consuelo’s repeating ‘o’ makes it one of the most obvious formal names for Coco.

The Italian equivalent of the title countess, Contessa is elaborate, dramatic, and easily shortened to Coco.

In 1870 ballet Coppelia, this is the name of the life-size doll that sets the plot in motion. It might mean “young woman,” or it could be a diminutive, ultimately from Jacob. Either way, it’s quite rare.

All of the Cora names possess the requisite Co, but the longer ones – like Coralie and Coraline – seem mostly likely to serve as formal names for Coco.

Corazon is the Spanish word for heart. Like Consuelo, it comes from one of Mary’s many titles.

Shakespeare gave this name to Lear’s loyal daughter. Like many a Shakespearean name, the exact origins of Cordelia are debated. The name might shorten to Cory, Cordy, Cora, Delia … or Coco.

A rare and elaborate name, Corinthia is ultimately derived from Corinth, the ancient Greek city-state.

Introduced by a medieval romance in Spain, Corisande could come from Corazon. It’s obscure, but appears in literature over the centuries.

Corliss means carefree. A fictional Corliss starred on radio, comic books, television, and even two movies in the middle of the twentieth century, briefly boosting the name into the US Top 1000.

A name from the ancient world, Cornelia has a long history of use – and exactly the right sound to lead to nickname Coco.

A Les Mis possibility with the requisite sound.

This surname name became a 1980s and 90s chart-topper. That means it’s more likely to be the mom than the daughter. Actor Courteney Cox named her daughter Coco, inspired by a childhood nickname.

Japanese feminine names often end with -ko, meaning child. The first part of this name might mean autumn or bright, depending on the kanji used to write it.

First a type of cloth, and later a word to describe a type of cat’s fur, Calico is seldom heard as a given name. But it seems nicely wearable, and the -co sound is right there at the end.

Another Japanese name, this time meaning celebrate or respect, along with the -ko ending.

One more Japanese -ko name, this one made extra wearable by similarity to former English favorite Kimberly. The first part of the name can mean beautiful or noble.

The name of a warm wind, blowing from the Sahara into the Mediterranean, Sirocco is every bit as wearable as Stormy or Rain.

An elaborate style of architecture or furniture, especially in 1700s Europe, Rococo isn’t often heard as a given name at all. But Coco is right there, ready for the wearing.

La Giocanda serves as another name for da Vinci’s masterwork Mona Lisa. It simply means “joyful” in Italian. With Giovanna on the rise, could Gioconda wear well in the US? Gia might be the natural nickname, but there’s a definite ‘co’ sound in there, too.

Long-time favorite Jacob never inspired a feminine spin-off, but Jacoba and Jacobina have potential. Cobie Smulders answers to Jacoba, but she could just as easily opt for Coco.

This Biblical place name trends masculine, but it also provides a direct route to Coco.

All of the feminine forms of Nicholas serve as formal names for Coco. Since Nikki/Nicky/Nickie seems like a mom name nowadays, Coco makes a great alternative. Nicolette

Again, Socorro comes from a title of Mary. In this case, it means help or relief.

A Greek name in the same style as Penelope, but not quite as popular – yet.

Classic Caroline doesn’t obviously belong with formal names for Coco. But there is a strong C and o sound, too.

CATHERINE CLAIRE, OR ANY OTHER CC COMBINATION

Almost any C.C. combination – Colette Clementina. Catherine Collins. Colleen Cassidy. While we might except the initials C.C. to lead to Cece as a nickname, it’s perfectly possible to end up with Coco instead.

The given name of designer Coco Chanel.

Do you think Coco needs a formal name? What are your favorite formal names for Coco?