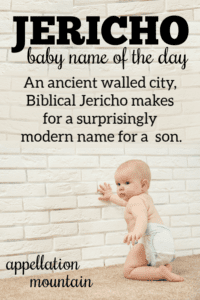 Jericho combines an ancient place name with a modern sound.

Thanks to Jenny & Jonah for suggesting our Baby Name of the Day.

Place names dot the current US popularity rankings. Just ask the parents of London or Savannah, Cairo or Camden.

And this isn’t any place name. Jericho has been inhabited for eons. Evidence of human settlement dates to 9000 BCE – it’s up there with Jerusalem and Damascus.

With such an ancient place, there’s bound to be debate over the name’s meaning. It’s sometimes called “the City of the Moon.” This reflects the theory that the city’s name comes from the Hebrew yareakh – moon, or possibly a related Canaanite word sharing the same meaning.

Yerach may have been a name for the original moon god, a name that survives as Jerah. Jerah also appears in the Book of Genesis as one of the descendants of Shem.

Stories about the city abound, but the most famous comes from the Old Testament. Joshua’s army of Israelites set out to conquer Canaan, and Jericho was a key city. It is said that Joshua brought down the city’s walls by following God’s instructions to repeat a specific ritual every day for seven days.  On the seventh day, when they’d completed circling the walls of the city, they were to blow their horns and then shout their war cry.

Site excavations have confirmed that walls once stood around the city.

Of course, more recent history is challenging. Any place name in the Middle East may show up in the news as a site of conflict. In the past year alone, Jericho has been ruled by the British, the Jordanians, the Palestinians, and the Israelis. As of 2019, the city is officially part of the Palestinian Authority.

Still, if you’re religious, choosing a name from the Holy Land might appeal. And the city sits near the Dead Sea, known for its palm trees, and history of all kinds. Even if the city’s role in Old Testament isn’t meaningful to you personally, the idea of choosing a name rich in history might appeal.

No one named babies Jericho until the 1970s, and then only in small numbers. But we have steadily chosen names like Jeremy and Jerome for our boys. And that makes nearly any Jer- name feel just on the right side of acceptable – and masculine.

The Biblical tale of the walled city appeals to many, and so Jericho is born by more than just children. There’s also:

Jericho checks so many boxes. It’s a place name and it fits with meaning-rich choices, too, thanks to its significance in the Old Testament.

It’s easy to imagine parents embracing this name for a son today.

Would you consider Jericho for a son?

First published October 17, 2012, this post was revised substantially and republished on August 21, 2019. 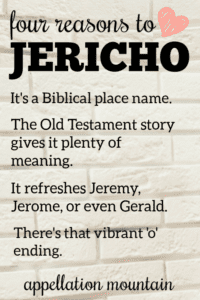