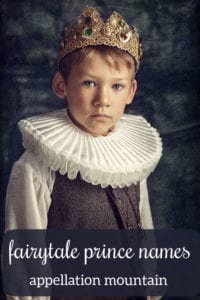 These aren’t the names of actual fairytale princes. Too many of those go nameless. Or we call them by generic titles, like Prince Charming. Actual princes, like William and George, answer to names so classic that they don’t necessarily feel regal.

Instead, these names could belong to a fictional prince. (You can read the correponding list of names for fairytale princesses here.)

And fairytale means daring and fanciful – at least a little bit.

And while many of them remain undiscovered, every name on this list could be worn by a boy born today.

Bayard comes with the handy short form Bay. There’s something dashing about this name, maybe because history gives us a celebrated sixteenth century knight called the Chevalier de Bayard, much monumented in France and referred to in literary works over the years, too.

Caspian is already a fictional prince, so maybe this one is too obvious. But Caspian, as in the sea and the Chronicles of Narnia royal, hits exactly the right note.

Among the most popular names on this list, but one that works. Christian is a royal name in Denmark, but in the English-speaking world, this name is more mainstream.

Steve is an ordinary guy, familiar from Blue’s Clues to Minecraft. But Esteban is an import, the Spanish version of the name, and it feels distinctive enough to be a fairytale prince name. I like the even rarer Estavan or Estevan, too. Bonus? This name actually means crown.

The older form of Everett, Everard is quite rare today. But there’s something quite dashing about the name. If Ev- names are big for both genders, from the endless string of Evie names for girls to Everett and even Everest, Everard merits consideration, too.

Too Tangled? Too often mistaken for Finn?  Maybe. And yet Errol Flynn lends this surname name the exact degree of dashing that Fairytale Prince names require.

Anglo-Norman English produced some fascinating names. Some stuck, while others faded away. Gallienus was Emperor of Rome in the third century, but he’s not exactly Julius Caesar. The name probably refers to Gaul. I think it feels like a spin on the equally dashing, but far more common Adrian, Julian, and even Gabriel. Plus, Gael continues to rise in use, and there’s The Hunger Games‘ handsome Gale.

Yes, Ricky Gervase is the comic genius behind The Office. But Saint Gervasius was an early martyr. Along with his twin brother Protasius, he’s the patron saint of Milan.  Gervais is the French form, though it is nearly extinct in France today. Gervasio is Italian; plenty of other European languages offer a form – including the English Gervase.  I’m pronouncing this one jer VAYS, which seems straightforward – and potentially wearable.

Another obscure, but legitimate name from English history in the key of Everard – in fact the same noble families used both names over the generations.  Kenelm is less expected than Kenneth, and more dashing, too.  Plus that ‘elm’ ending lends just a hint of nature name. Though the name’s roots are Old English, from cene – bold and helm – helmet, which makes Kenelm a cousin to William.

Halle Berry’s baby boy received this obscure form of Matthew. I can imagine Maceo as a fierce revolutionary, a brilliant artist, or a fairytale prince.

Too obvious? Probably. But if girls can be Mercy and Grace and Temperance, why can’t boys be Loyal and Noble and True?  It is certainly a princely quality.

Top Ten Oliver feels like an every-boy kind of name. But Olivier? A little more romantic. Glitzier, even. While it’s sometimes used for fictional bad guys, Olivier is too dashing to leave him to the villains. I can already see Olivier in shining armor.

The hunter from Greek myth is most famous as a constellation. But it’s also a popular boy name borrowed from the night sky. And I think it could be pitch perfect for a fairytale prince.

In Charlemagne’s court, there were a dozen high-ranking knights, known as paladins or peers. The word comes from a Latin term related to our word palace, and originally referred to a court official. Now the meaning is closer to warrior.  It’s obscure, but possibly a great choice for a son.

Perseus is a hero, and Percy Jackson puts another spin on the Percy names.  But Percival, borrowed from King Arthur’s Knights of the Round Table, has that out-of-our-time feeling that fits on this list of fairytale prince names.

Also spelled Peregrin, it’s best known as the given name of Hobbit Pippin Took, one of Frodo’s companions in The Lord of the Rings. Yes, Peregrine is elaborate. But so is Alexander.  And Perry is a great nickname – that is, if you’re not all about Pip. Plus, there’s a Saint Peregrine to inspire.

Rafael brings to mind an angel, a Renaissance master, and a Teenage Mutant Ninja Turtle, too. Plus, a very small number of actual princes have answered to the name, which isn’t true for every one of the fairytale prince names. A little bit dreamy, a little bit daring – Raphael screams fairytale prince to me.

The most obviously real world princely name on this list comes from the late Prince Rainier III. He ruled the tiny nation of Monaco, and brought home Hollywood royal Grace Kelly to share his palace. Originally a Germanic name, it traveled through French to English. Rainier didn’t survive in English, but French is the official language of Monaco, where this name is a thoroughly princely pick.

Sure, Sebastian makes a popular choice for non-royal, real boys today. THe name has ranked in the US Top 100 every year since 2000. But there’s something romantic and imaginative about this name, which puts it on the list of fairytale prince names.

Like Noble, this name could been overly obvious. But ever since Emile Hirsch named his son Valor in 2013, it has seemed like a possible up-and-comer.  If Victor is a regular guy name, is Valor such a stretch? Certainly not for a fairytale prince!

Do any of these seem like fairytale prince names to you?  Are there other names that should be included on this list?  Which names are wearable for real, non-regal boys?

Originally published on July 11, 2014, this post was revised substantially and re-published on March 3, 2020. 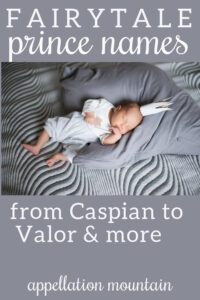 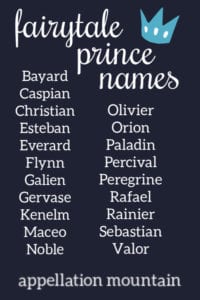