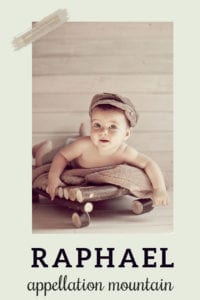 He’s an archangel, and a major figure in Judaism, Christianity, and Islam. As religious figures go, he’s well-known. John Milton included him in Paradise Lost. The television series Supernatural gave us a version of Raphael, too.

A handful of additional saints Raphael have been recorded, but odds are that many of the places are named for the angel. There’s more than one Saint-Raphaël in French-speaking countries, as well as several San Rafaels through the Spanish-speaking world.

A prolific artist, the architect and painter helped define the High Renaissance in Italy. A contemporary of Michelangelo and da Vinci, he’s a master of the era.

Perhaps Raffaello isn’t quite as well known as some of his contemporaries. But a 1980s animated series putting them back on equal footing.

The original Teenage Mutant Ninja Turtles debuted way back in 1984. While the series has been rebooted, it’s never really gone away.

The premise? A quartet of turtles, exposed to the same radioactive isotopes that created comic book hero Daredevil, meet up with a wise sensei, who happens to be a rat, in the sewers of New York. They grow into pizza-loving crimefighters. The rat – Splinter – named them after Renaissance artists: Michaelangelo (a typo that stuck), Leonardo, Donatello, and Raphael.

That makes the name instantly familiar to a generation – and counting.

The baby name Raphael has ranked in the US Top 1000 every year since 1901, and most years before that.

But it’s never been common.

It rose in use in the late 1980s, into 1990 – suggesting that the turtles did encourage parents to consider the name. (Or maybe not. The very similar Gabriel entered the Top 100 in the 1970s. It’s not a stretch to discover Raphael from the similar-sounding Gabriel.)

The baby name Raphael now hovers in the 500s. That makes it familiar, but far from common.

And yet, in plenty of languages, the name is far more common.

That makes Rafael the logical brother name for Isabella and Sofia, a crossover that feels obviously Spanish, but easily worn in English.

Rafael shortens to Rafi and Rafa, but we also call Rafael and Raphael by another nickname: Rafe.

We also sometimes pronounce the German Ralph the same way. Think Ralph Fiennes. But the names have completely separate origins.

Despite the name’s relatively rare status in the US, Raphael and Rafael are global citizens, names heard ’round the world.

It’s as romantic as Romeo, and yet Rafe makes Rafael as accessible as Gabriel and Gabe, or Michael and Mike.

If you’re hunting for something with a certain pan-European flair and a long history of use, the baby name Raphael is certainly one to consider.