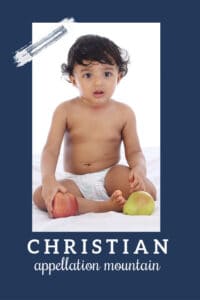 Biblical baby names have always been in use, but they feel especially stylish right now.

From Old Testament Ezra to New Testament SIlas, it’s easy to rattle off a dozen baby boy names that blend the ancient with the current.

Christian isn’t exactly one of those names, though.

There’s no one by the name in the Bible. After all, it was a title, given to Jesus of Nazareth, meaning “the anointed one.”

Over time, Christian did indeed come to mean follower of Christ.

In England, Christian first appears as a gender-neutral choice during the Middle Ages. In fact, it was heard across Europe in the same era.

Kings of Denmark, Norway, and Sweden have all answered to the name since then.

Prince Christian of Denmark, Count of Monpezat, is the eldest son of Denmark’s current crown prince. Presumably, he will follow his father and grandmother, Queen Margrethe II, to the throne.

There’s at least one Saint Christian, a thirteenth century Bishop of Prussia.

The name remained in use across the centuries.

While it’s slowly become much less common as a girl’s name, it’s never disappeared entirely. Figures like eighteenth century botanist and natural historian Christian Ramsay, Countess of Dalhousie, can be found in the historical record.

The baby name Christian has ranked in the US Top 1000 every year since data was first compiled for 1880.

It rode the wave of Chris- names into greater popularity beginning in the 1960s.

While Christopher fared better for boys, and girl’s name Christine, as well as Christina, Christa, Crystal, Kristen, and dozens of other related names, surged for our daughters, Christian also enjoyed a boost.

Legendary, world-changing bearers of the name are many.

Given their success, Christian doesn’t feel like an expressly Christian baby name, either.

Portuguese footballer Cristiano Ronaldo is one of the most famous figures in the spotlight today.

From Moulin Rouge to Fifty Shades of Gray, Christian has been the name of the leading man.

It’s also belonged to characters in television series from Breaking Bad to Nip/Tuck to Lost.

It’s the name of Cher’s first crush in Clueless.

For the girl’s side, Night Ranger scored a mega-hit with their 1983 power ballad “Sister Christian.”

In Cyrano de Bergerac, Christian is the handsome cadet who woos Roxane with Cyrano’s words. While this counts as classic literature, it’s almost constantly adapted, most recently in 2021, with Peter Dinklage in the title role, and Kelvin Harrison Jr. as the handsome Christian.

We don’t necessarily list the baby name Christian with the most classic of boy names, like James and Matthew. But it’s also not one of the more unique Biblical names, like Nehemiah or Obadiah. Instead, it’s a near classic, having more in common with names like Jesse or Aaron or Benjamin – names with a long history of use, but not quite as conventional as William or John.

In many ways, the baby name Christian fits in beautifully with current favorites inspired by Christianity. Just like A-ending names like Elijah, Isaiah, and Jonah are enjoying a moment, Christian fits with so many two-syllable, N-enders parents have embraced in recent decades. If Ethan and Logan, Mason and Jackson can be chart-topping favorites, why not Christian?

No question, the name means something expressly religious. And unlike the girl’s name Grace, it’s tough to see another read on Christian. It is literally the name of a faith tradition, one to which nearly 1/3 of all people on earth today belong.

Still, that suggests that 1/3 of people are open to the idea of using the baby name Christian – and not just in the US. It’s been a favorite across Europe in recent decades, too.

In some languages, the name is pronounced with three-syllables – kris TEE ahn – or similar.

While you might find it on lists of baby girl names, the overwhelming majority of Christians are boys. Nicknames Chris and Kit are always options, too.

If you’re torn between the most conventional Biblical favorites like John and more daring ones like Solomon or Esau, Christian splits the difference nicely.

What do you think of the baby name Christian?

First published on February 23, 2010, this post was revised substantially and re-published on November 15, 2022. 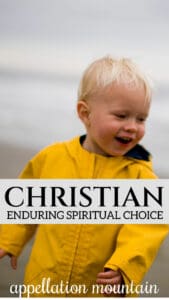 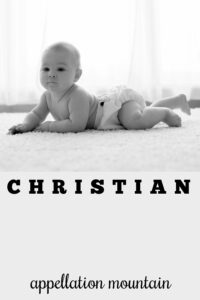