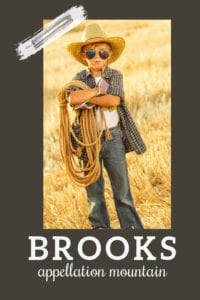 The baby name Brooks mixes a polished style with a outdoorsy, country vibe.

Thanks to Leah for suggesting our Baby Name of the Day.

So many surnames evolved from the places our ancestors lived. Ashley referred to an ash tree clearing; Whitaker, a white field.

Some remain obvious, all these generations later. The baby name Brooks started out as a surname for someone who lived near a brook – a small stream.

The German Brucks sounds the same in English, but referred to marshland. But close enough that plenty of Brucks – and other similar-sounding names – also became Brooks over the years.

As surnames go, Brooks was pretty common. Notables by the name inspired places all over the US and throughout the English-speaking world. A few people and places you might think of include:

Other notables include silent film star Louise Brooks, poet Gwendolyn Brooks, actors Mel Brooks and Albert Brooks, and too many more to name.

Suffice to say that Brooks appears in nearly every field of endeavor.

But one image long defined the baby name Brooks.

In 1818, Henry Sands Brooks opened H & DH Brooks & Co in Manhattan. His four sons eventually joined him in the business, and it was renamed Brooks Brothers. Originally known for menswear, it’s the oldest clothing retailer in the US.

Over the years, Brooks Brothers became synonymous with traditional, high-quality tailoring. Customers included Abraham Lincoln and Cary Grant. They provided much of the men’s clothing for Mad Men and the 2013 movie version of The Great Gatsby. References appear in literature and pop culture, from Anne Rice to Marvel Comics.

And while the store may be struggling after a year of everyone sticking close to home, the legacy stands. It makes the baby name Brooks feel preppy and polished, a blue blazer and bow tie kind of name.

Given the widespread use of the surname Brooks – it’s among the 100 most common last names – it’s no surprise that the baby name Brooks has history, too.

But most years, the baby name Brooks felt relatively uncommon. It never approached Top 500 until 1980s.

And it didn’t become a fast-rising favorite until very recently.

What explains the name’s ascent?

The baby name Brooke caught on for girls in the 1960s. Credit originally to philanthropist Brooke Astor, but later to model-actor Brooke Shields.

The baby name Brooks shares roots with Brooke, and it started out as a family surname for Mrs. Astor, too. Nothing dictates that one should be feminine and the other masculine, but Americans have tended to view them that way – if only because the first notable Brookes were female, and all of those Brooks? Male.

GARTH and BROOKS and DUNN

Baltimore Oriole and future MLB Hall-of-Famer Brooks Robinson might explain some of the name’s bump in use during the 1960s and 70s.

So might Herb Brooks, the coach of the 1980 Olympic team that defied the odds to defeat the Soviet Union. Their story is told in the 2004 movie Miracle.

But the timing isn’t exactly right to explain the rise of the baby name Brooks. There’s a sharp spike in 1980 through 1982.

We know, though, that country music’s Garth Brooks became a mega-star in the 1990s, a best-selling country artist with considerable appeal.

The baby name Brooks still wore a blue blazer, but now paired with some cowboy boots.

The singer eventually entered semi-retirement to spend more time with his family, but he’s never really left the spotlight.

If there were any doubt that Brooks has gone country, successful duo Brooks & Dunn scored a string of hits, beginning while Garth was still riding high.

What explains the name’s success? While the high profile uses of the name helped, including the musicians, a few celebrity babies, and some real and fictional figures, the baby name Brooks also succeeds on style and sound.

But maybe this swiftly rising surname name is really all about contrasts.

It’s a name at home in pinstripes or a pick-up truck. Parents might worry that a name is too formal or too casual. The baby name Brooks offer both – it’s easy to imagine a man named Brooks as an athlete or an accountant, a river rafting guide or a surgeon.

That versatility truly makes Brooks one of the names for our time.

What do you think of the baby name Brooks? 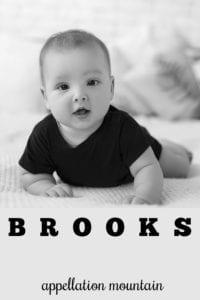