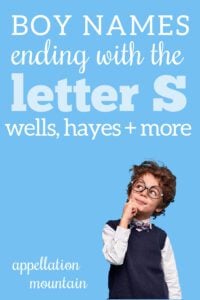 Boy names ending with S are enjoying a moment.

It’s easy to credit Miles, or maybe Brooks for the rise. But don’t forget that enduring classic James remains #6 in the US. There’s something to be said for the sound.

Of course, it’s not just preppy surname names catching on. The ancients are back in a big way. Just ask Atticus and Maximus. Imports, too, like Anders and Niels, feel more wearable than ever before.

But this list focuses on that first group, the surname names that make natural brothers – or replacements – for Brooks and Miles. They’re brief, familiar, and mostly nickname-proof.

None of them rank high in the US popularity ratings – yet. But lots of them are climbing. And any of them would wear well for a boy born today.

Drop the J from James and you’ll have surname-style Ames. It comes from the Latin amicus, meaning friend. That’s an upbeat meaning to pair with a bright and energetic sound. Add an E to the front, and you’ll have Eames, pronounced with a long E sound, but sometimes a cousin to Ames. Eames brings to mind midcentury modern furniture designers, Charles and Ray Eames. Ames leans Americana in a different way, maybe thanks to Ames, Iowa – named for US Congressman Oakes Ames, influential in building the transcontinental railroad.

A few celeb parents have recently chosen Banks for girls, but this name is typically masculine. It brings to mind the Banks family from the Mary Poppins movies, but also the financial institution. As a surname, it most often referred to someone who lived alongside a river bank. Banks mixes a touch of the natural world with a sort of affluence. But if we can name babies Cash, why not Banks?

If you’re a Downton Abbey fan, this name probably makes you think of the honorable John Bates, servant to the Crawley family. But odds are it descended from Bartholomew, once nicknamed Bate. Beatty is another descendant. While Bartholomew has become very rare these days, it’s still just slightly more popular than Bates. But with so many Brooks-name rising, that could change.

Originally a surname related to bridges, the first Briggs lived near one, or maybe worked as bridge-keeper. There’s something rugged about the sound. It’s preppy and adventurous – just like Brooks. Briggs Cunningham raced yachts and automobiles. Some credit him with inventing the racing stripe for his car in 1951’s LeMans Grand Prix. Something about that feels exactly right for this name.

David appears on nearly any list of classic boy names. Not only is it borrowed from an Old Testament hero, but it has a great meaning, too: beloved. Surname form Davis shares that meaning. Plus it picks up a stylish ‘s’ ending. Some might argue that Jefferson Davis blights the name. I say that jazz great Miles Davis restores it, and then some. If James is too traditional, Davis might be just different enough.

Another surname from a Biblical favorite, Ellis comes from Elijah. It also serves as the English form of a Welsh name meaning kind. Unlike many of boy names ending with s, it’s a perennial favorite, appearing in the US Top 1000 every year since the rankings were established in 1880. There’s designer Perry Ellis, actor Tom Ellis, and musician Ellis Marsalis, Jr.

Gates might scream Bill, as in Microsoft. But it has history as a first. Gates McFadden played Dr. Beverly Crusher on Star Trek: The Next Generation, and Curtis Sittenfeld’s novel Prep features a female Gates, too. But I think trends favor Gates for a boy, a fresh take on James with a hint of the rich meaning that’s taken Journey and River straight up the popularity charts.

If you’re into disco, this name is all Bees Gees. Though, Maurice, Barry, and Robin were the brothers Gibb – hold the s. But let’s face it, 1977 is the distant past. Gibbs might also bring to mind Mark Harmon’s character on NCIS. But I think this surname derived from Gilbert feels like a blank slate, ready for a daring parent to discover.

Unlike many of the boy names ending with s, Giles started out as a given name, not a surname. Aegidius in Latin, it became Giles in French. A seventh century hermit saint made it popular. The Normans brought it to England. Many a church in the UK is now known as Saint Giles, including one in London. It saw some use in the US through the middle of the twentieth century, but is rare today.

Harrison sits just outside the current US Top 100. And we’re wild about Henry. But American parents haven’t quite embraced Harris … yet. It’s a Top Ten choice in Scotland, along with Jack, Oliver, and Leo. That suggests we’re just one high profile Harris away from the name catching on here, too. Fun fact: Harris sounds a lot like Sarah backwards, making it a wildly different way to honor a Sarah.

Among the hottest of the boy names ending with s, Hayes has lots to recommend it. It’s cousin to former chart-topper Aidan, both derived from the Irish Aodh – fiery. It’s presidential. (Though I don’t know much about Rutherford B.) And it sounds like haze, as in girls’ favorite Hazel, and the weather phenomenon, too. It feels edgy and just a little bit different.

Yes, it’s the name of Calvin’s anthropomorphic tiger, in a long-running comic strip. But he’s named for 17th century philosopher Thomas Hobbes, known for his work on social contract theory. That lends this name a sort of intellectual vibe, a brother for Simon as easily as Brooks. It’s also a great way to honor a Robert, as the surname also certainly derived from Hob and Hobbe, both medieval nicknames.

Holly is a nature name staple for girls, one that peaked in the 1970s. Hollis takes this into boy names ending with s territory – and makes it feel like a fresh, new possibility. It could be a great choice for a child born around the winter holidays, but it doesn’t scream Christmas, either. If you’d like a nature name with a preppy spin, Hollis could be a promising option.

In Irish mythology, Aonghus was the god of love and youth. We know it as the thoroughly Scottish Angus, but it’s sometimes Anglicized as Innes, too. It’s also a Gaelic word for island; sometimes spelled Ennis – which is the name of actor Kirsten Dunst’s son, born in 2018. I like the mythological tie-in, but both meanings appeal.

Like Smith, Jones makes an almost anonymous surname. But as a given name, it’s energetic, unexpected and downright fun to say. It most often evolved from the oh-so-common given name John. Any Jones would share his name – if not with other kids’ firsts, then with artisanal soda, a British bootmaker, and a handful of places, too.

Surname name Keats brings to mind the English Romantic poet. But it probably comes from kite, the bird of prey. So that makes the name literary and dangerous, a nature name at home in the library. And while Keats has never ranked in the US Top 1000, Keaton has charted since Family Times aired on NBC in the 1980s.

Mills feels less expected than Miles. It sidesteps the beer references of Miller. Liam Neeson and Brad Pitt have both worn the surname in movies; Henry Daniel Mills was a pivotal character in ABC’s fairytale drama Once Upon a Time. But I suspect it’s the s-ending that has helped Mills reach a new high in 2018 – even if it’s very much under-the-radar.

If Miles is helping Mills up the popularity charts, then credit goes to Parker – currently in the US Top 100 for boys – for boosting Parks to an all-time high. Parker and Parks both bring to mind parkland, and probably evolved as occupational names for those who worked or lived nearby. But back in the Middle Ages, Parkin was a nickname for Peter, making Parks an intriguing update to that traditional name, too.

Surname-name Pierce is familiar thanks to actor Brosnan, but its use predates Remington Steele. Piers sounds just a little different, but it’s an earlier form of the same name. Fourteenth century poem “Piers Plowman” reinforced the name’s seriously old school vibe, while sci fi author Piers Anthony brings it back to our moment. It’s just different enough to fit right in with Brooks and brothers.

The late actor Christopher Reeve made his name as Superman, decades before we became Marvel-obsessed. But while Reeve is an occupational surname for a sheriff, Reeves has a different backstory: it comes from the Middle English phrase “atter eves” – for someone who lives at the edge of the woods. That strikes me as rather romantic.

Rhodes feels ancient. The towering Colossus statue stood on the Greek island of Rhodes until it collapsed in an earthquake, 226 BC. It’s a common surname, too. Plus, Marvel hero War Machine is James Rhodes. (He’s a frequent ally of Iron Man, who calls him Rhodey.) And And actor Sara Gilbert has a son named Rhodes Emilio.

There’s every reason to expect Riggs to join Briggs in the US Top 1000. It has the same rugged, can-do feeling. Originally a sailing term, “rig” can also refer to a truck – a big rig – or a swindle. But I’d say Riggs takes the best of the possible meanings. There’s also the Lethal Weapon character Martin Riggs, and author Ransom Riggs, both reasons parents might recognize this as a rising choice for our sons.

With River so popular, why bother adding an s? One answer: Rivers Cuomo, musician and songwriter, frontman of Weezer and solo artist, too. And it feels like a twist on that familiar nature name, something just slightly different – possibly a little bit preppier, slightly less crunchy. In 2010, actor Jason Schwartzman named his daughter Marlowe Rivers.

We recognize Peter, John, and Elijah, even if the connection to Parks, Jones, and Ellis feels slippery. But Rollins comes from Rollo, Rudolf, Roland, or maybe Rolf – far more obscure. Still, it fits the general style. Plus, it makes me think of musician-activist Henry Rollins, Florida’s Rollins College, and a handful of other uses of the surname.

I’ve yet to write about Rollins, but check back for updates.

Wells is a new kid on the block, one that’s following surnames like Wilder and Brooks up the rankings. What we love about it: it’s a nature name, but with layers of meaning built in. Wellspring implies wholeness and plenty. There’s something about Wells that feels healthy, vibrant, and calm. It’s a preppy, polished name with plenty of depth. (Excuse the pun.)

Woods might just work. It’s a familiar surname – think Tiger and Elle. And it’s a nature name, too, one that fits the same category as Rivers and maybe Wells. Plus there’s Forrest and Rowan and lots of names that feel like they’re akin to Woods. While it remains rare, it has a homespun, folksy feel that might appeal to plenty of parents. Woodrow, Elwood, and other wood names come to mind, too.

Keats is one of the great romantic poets. William Butler Yeats is another literary giant; this time, a leader in the Irish Literary Revival and winner of the Nobel Prize for Literature in 1923. Keats rhymes with beats, but Yeats with Gates. And so it’s the phonetic Yates I put on this list. They’re cousin, both derived from the rhyming gates.

What are your favorite boy names ending with S? 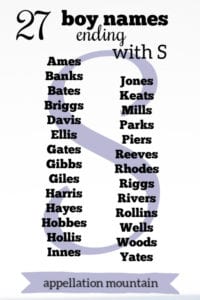