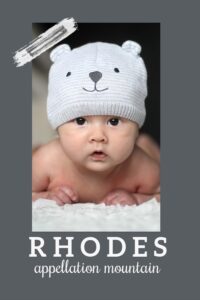 Back in the fourth century BC, the island of Rhodes had just warded off a massive invasion. In celebration, they commissioned a statue of the son god, Helios. Some of the metal in the frame was melted down weaponry from the battle.

Helios was 30 meters high. For comparison, the Statue of Liberty is 46 meters – not counting her pedestal. Of course, Lady Liberty was designed and built in the late nineteenth century, two millennia later, with all the engineering advances that implies.

The statue stood somewhere near the harbor entrance, though there’s debate as to the exact placement. We know that the statue probably didn’t straddle the harbor, even though most depictions show Helios mid-water.

Suffice to say that the Helios statue, better known as the Colossus of Rhodes, was a marvel, and is considered one of the Seven Wonders of the Ancient World.

It stood for over fifty years, until the great earthquake of 226 BC, when the Colossus snapped at the knees. It could have been rebuilt, but the people decided that they might have displeased Helios with their tribute, and decided against reconstruction.

The pieces remained where they’d fallen for centuries, until the 600s, when an Arab army captured Rhodes and carted away the bronze and other materials as the spoils of war.

So where did the island get its name?

The Greek name, Rhodos, belongs to a nymph in Greek mythology. Her name probably came from rhodon, meaning rose.

Or maybe the island was named for erod, the Phoenician word for snake, as they were once abundant on the island.

Another theory ties the name include pomegranate, from the word rhoia.

Plenty of people have answered to Rhodes as a surname.

There’s no connection to the statue. Instead, it comes from the Old English rod or Middle German rode, all words used to mean a clearing in the woods. So it’s a place name turned last name.

It’s also no relation to the English word road, which didn’t come along until the 1500s. But plenty of people have answered to the last name Rhodes, including authors and athletes, politicians and military commanders. And yes, there’s more than one Dusty Rhodes. So far, most of the Rocky Rhodes seem to be fictional.

Two famous bearers of the surname Rhodes take this name in additional directions.

British businessman Cecil Rhodes made a fortune mining diamonds in South Africa. The African region Rhodesia is named for him. Not surprisingly, he’s a figure of much controversy. At a minimum, Rhodes was an unabashed imperialist. The company he established, De Beers, went on to dominate the international diamond trade for over a century, with all the conflict that implies.

But Rhodes is best remembered for the scholarship fund created in his will, and it’s almost certainly what most think of when they hear the name.

In fact, “Rhodes scholar” signals significant academic achievement – a colossus of the classroom, if you will.

That makes the name sound intelligent, discerning, and accomplished.

Fans of the Marvel Cinematic Universe might have another thought.

Iron Man’s BFF is James Rhodes, also known as Rhodey. He’s got his own Stark Industries-designed suit, and fights the good fight as War Machine.

Don Cheadle has played the role in recent movie adaptations of Iron Man and The Avengers. There have been rumors of a War Machine-centered movie, but so far, they’re just that. Instead, the character has appeared in the Disney+ original series Falcon and the Winter Soldier and will also be part of the cast of 2023’s Secret Invasion.

Even without a starring role, Cheadle has raised the profile of the name – and that great nickname Rhodey.

Let’s call the baby name Rhodes one to watch.

It’s easy to imagine this name continuing to climb in use.

The ancient world lends it plenty of strength. The sound makes it perfectly stylish for a baby boy today. It’s the best of Rhys/Reese and Miles, a name that sounds like it ought to be more common, even though it’s still among the more unusual names parents might consider. At least for now!

What do you think of the baby name Rhodes? 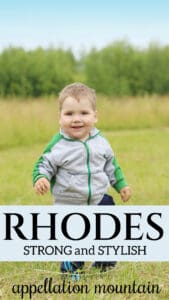 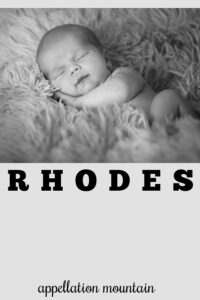