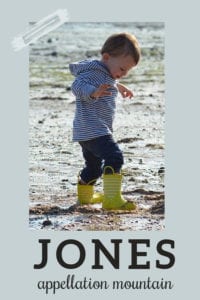 Can you imagine the baby name Jones? Common as a last, but rare as a first, it might fit right in with Mason, Jackson, and Hayes.

Thanks to Elle for suggesting our Baby Name of the Day.

It seems like John, the long-time #1 name for boys in the US and much of the English-speaking world, has fallen out of favor.

With names like Jackson (and Jaxon and Jaxson), Jack (and Jax), Ian, Evan, and more all in the US Top 100, it’s easy to argue that names derived from John remain near the top of the popularity charts – if not the very peak.

Originally a Welsh surname derived from John, Jones belongs with this group. Northern European spellings like Joens and Jöns, also cousins to John, were easily absorbed by Jones in the English-speaking world.

If talking about the baby name Jones seems odd, consider how close it is to Jonah and Jonas.

The latter two come from a Hebrew name meaning dove. In the Old Testament Jonah survives a voyage in the belly of a whale. It’s a popular tale today – and was in the Middle Ages, too, helping the name to spread.

Jonas is considered the surname version of the name – think the Jonas Brothers – except that’s really a false distinction. Both Jonah and Jonas have a long history of use.

Jones sounds like a nickname for Jonah, something like Jules for Julian or Hayes for Hayden. Jonah’s Top 200 status might help us warm to the sound of Jones.

But back to the surname for a minute: how did it become so anonymous?

Lots of last names reference John – think Johnson and Johns and, of course, Jackson, from nickname Jack. But there’s also Jensen and Hanson and Ivanov and Zanetti and Jankowski. Some of these seem less likely as given names, but they’re all surnames tracing back to John.

Jones is only the fifth most popular surname in the US, a few spots behind Johnson, and, of course #1 Smith. Johnson ranks #2.

But we’ve been using it in phrases forever.

Alias Smith and Jones ran for three seasons in the 1970s, a Western about two outlaws trying to go on the straight and narrow. It suggests that we see the names as anonymous and ever-present.

But it’s not a 1970s phenomenon. Jones cemented its place in pop culture decades – maybe a century – earlier.

KEEPING UP WITH THE JONESES

In 1913, we met the social-climbing McGinis family in a comic strip called – what else? – Keeping Up With the Joneses. Created by Arthur “Pop” Momand, the comic details the attempts of the family to match their more affluent and successful neighbors – who never make an appearance. It ran until 1940, more than enough time to lodge the phrase in our brains.

But it goes even further back. Mark Twain used the phrase “Smith and Jones” as early as 1901.

Other references date back even further. It’s possible that we owe it all to Edith Wharton’s family. The author was born Edith Newbold Jones in 1862. Her father was part of the New York Jones family, wildly wealthy and quite influential. A number of Jones family members built houses that may very well have inspired envy – and one-upsmanship – among the neighbors in Gilded Age society.

Most common English, Irish, or Scottish surnames filter into use as given names at least occasionally, and Jones is no exception.

But by the year 2000, it languished near obscurity. A mere fourteen boys received the baby name Jones that year, even as surnames like Hunter and Cameron caught on.

That changed slowly, though.

What explains the new appeal?

From James to Hayes to Banks, we’re embracing boy names ending with s. That seems like a big opportunity for Jones to transition from surname to first name.

There’s also something upbeat and approachable about the sound. No one could argue that Joe is anything but friendly and accessible. Jonesy looks a little awkward, but it’s downright fun to say.

With former surname name favorites like Mason on the wane, this could be the moment for Jones to take the spotlight.

What do you think of Jones as a given name?

Image by Nadine Doerlé from Pixabay