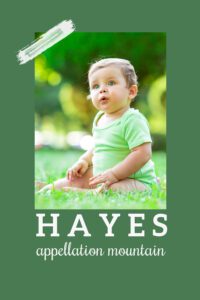 The baby name Hayes is cousin to chart-topping Aidan, and the heir to fast-rising Brooks.

Thanks to KayLeigh for suggesting our Baby Name of the Day.

The baby name Hayes doesn’t seem as obviously Irish as Liam or Ryan. But it does come from the same Irish root as Aidan: Aodh, meaning fiery.

Hay, Haye, and Hey all appear in surnames, too. Depending on origin, they might refer to a heath or a clearing or a hedge, to a high place or a tall person, and so on. It could even derive from the given name Hebrew Chaim – life – which has become Chaya and Haya, along with a half dozen other forms, across the years.

There’s a Scottish Clan Hay, complete with distinguished members filling the history books and a tartan of their own.

Hayes started out as a surname, and a fairly common one, too.

There’s nineteenth US president Rutherford B. Hayes, elected in 1877.

Fictional characters, like Moonlighting’s Maddie and The West Wing’s Ainsley come to mind. So does Major League’s Willie Mays Hayes.

Actor Helen Hayes racked up Emmy, Grammy, Oscar, and Tony awards over her long career, as well as a Presidential Medal of Freedom. A Broadway theater also bears her name.

Like many surnames, some families passed it down as a first.

The baby name Hayes appears in US data as far back as 1880, the very first year for which data is reported.

Still, you could never call the baby name Hayes popular – or even broadly familiar.

That all started to change in the twenty-first century.

It has since climbed to #245. That’s downright mainstream.

The baby name Hayes fits right in with so many trends.

It’s a surname name, just like Carter and Mason. Last names have become the first place parents look for something familiar, but different.

Aidan and Aiden gave rise to Hayden. It makes Hayes the next logical name in the series.

Unlike some choices, there’s no clear, single reason the baby name Hayes rose in use.

A handful of high-profile birth announcements might’ve helped. Actor Kevin Costner named his son Hayes in 2009, the same year the name returned to the US Top 1000.

Comedian-turned-actor Hayes MacArthur might’ve helped the name catch on, too. (MacArthur was named for his great-aunt, Helen Hayes, the legendary actor mentioned earlier.) He co-starred in Angie Tribeca from 2016 through 2019.

In the short-lived 2016 series Conviction, Hayley Atwell played Hayes Morrison. Bones also had a recurring (male) character by the name.

Jessica Alba and Cash Warren chose it for their third child, a brother for Haven and Honor. The youngest Alba-Warren arrived on December 31, 2017. And sportscaster Jim Edmonds welcomed twin sons named Hart and Hayes in June of 2018.

None of those factors was enough to push the baby name Hayes into wider use, but chances are that every additional use helped.

The baby name Hayes has become a favorite for parents, a twenty-first century staple.

It’s a solid choice for families after something current, but with deep roots. Hayes balances lots of qualities – it’s cool, but doesn’t try too hard. We recognize it, but we don’t know dozens of boys with the name. (At least not yet!)

What do you think of the baby name Hayes? 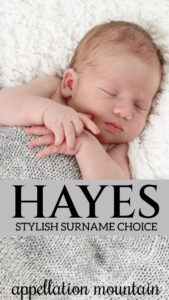