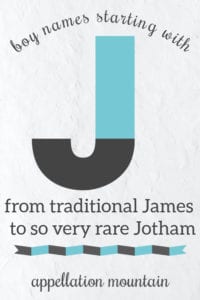 Parents love the letter J. It starts John, Joseph, and James, the most evergreen of classic boy names.

But it’s also the first letter of chart-topping modern inventions, like Jayden and Jax. Tally up all of the spellings of Jackson, and it might claim the #1 spot in the US.

Every style in between is represented, too. Biblical favorites, like Joshua and Jacob, to imports like Javier, word names like Justice, and, of course, the oh-so-cool, but still traditional Jack.

No surprise, then, that J is the most popular letter for boy names in the US.

Read on for more boy names starting with J, from the most popular of the moment, to the rarities you might consider for a son.

A Biblical classic name, worn by saints and kings, as well as many other notables. It’s hard to overstate this name’s classic status. What has changed? Nicknames! An early generation answered to Jimmy and Jim, but more recently James are likely to be Jamie … or, more and more often, just James.

The name of action heroes from fairy tales to Hollywood blockbuster, this traditional nickname for John stands on its own nicely.

A surname name meaning son of Jack, Jackson is associated with artists (Pollock) and presidents (Andrew), and found all over the map.

Believe it or not, James and Jacob are twins, separated at birth – or maybe shortly thereafter. They’re both ultimately derived from the Hebrew Ya’aqov, which became Iakob, Iacobus, and Iacomus. Now they’re reunited in the US Top Twenty.

The long-running top name in the US has fallen from its perch, but remains in steady rotation. Factor in all the John-derived and related names, and it’s clear the name’s influence has not waned.

A sophisticated, longer boy name just right for our age of Sebastian, Oliver, and Adrian. The spelling Julien is on the rise, but remains far less common.

As the Aidan names surged in popularity, Will and Jada Pinkett Smith named their son Jaden in 1998. But by 2003, it was the Jayden spelling that headed towards the US Top Ten. After five years there, it’s fading now, but there are still lots of newborns whose names end in the -aidan sound.

An Old Testament name with a long history of use, from the eighteenth century Josiah Bartlett, signer of the Declaration of Independence, to West Wing’s fictional president Josiah “Jed” Bartlet – named after the original.

A twenty-first century spin on Jackson.

It’s easy to dismiss Joshua as a faded 80s favorite. But Joshua ushered in an entire generation of boy names, from Noah to Sebastian.

It looks like a John-Nathan smoosh, but it’s an independent name. Gulliver’s Travels author Jonathan Swift lends it some literary appeal.

A surname name in the key of Jackson.

Jeremy was long the popular form of Jeremiah, but lately it’s the full Old Testament original that appeals to parents – and fits right in with favorites like Elijah and Isaiah.

The name of the river where Christ himself was baptized, Jordan might be a deeply spiritual choice. But it was also a smash hit of the 1990s, helped in part by Jordan Knight, frontman of chart-topping 90s boy band New Kids on the Block.

The Spanish form of the classic Joseph.

The masculine answer to Ruby and Pearl.

A Top Ten name from 1971 through 1983, Jason has faded slowly. In Greek myth, Jason led the Argonauts and searched for the Golden Fleece. If it hadn’t been so big back in the late twentieth century, it would be a smash hit today, thanks to ancient roots and a cool, modern sound.

Bright and energetic Jonah comes with a built-in whale of a (Biblical) tale, but this Old Testament name is broadly popular.

A short and strong sound, Jude is familiar to the world thanks to the Beatles’ “Hey Jude.”

Another possible spelling for Jace.

The Spanish form of John, every bit as classic.

Another traditional name for Spanish-speakers, seldom heard as a given name in English.

A former favorite with ancient roots, Justin brings to mind 90s boy bands. But this name has actually appeared in the US Top 1000 every year since before 1900, so Justin has staying power.

An Old Testament name, Judah is a longer form of Jude – or simply a slightly different alternative.

An Old Testament name, Joel lags behind Joseph and now Jonah, too. But it has plenty of appeal.

A 1970s and 80s favorite, Jeremy is the typical English version of the Old Testament Jeremiah.

A high-flying, energetic name for a son.

The Spanish form of Xavier, boosted by leading man Javier Bardem, along with other notables.

A generation of Jennifers might inspire sons named Jensen in their honor; or perhaps this Scandi surname related to John is yet another Jackson-inspired possibility.

Another spelling of former favorite Jayden. This is the one Will Smith and Jada Pinkett used for their son, inspired by mom’s name.

A Spanish classic, Joaquin is far more familiar than Joachim, said to be the father of the Virgin Mary.

An ancient name, the original form of Julian and all the other Jul- names we know so well.

More casual than Jacob, not quite as popular as Jack.

Short for nearly any J name on this list, or a stand-alone.

A name mentioned in the Old Testament, Jared means descendant.

Another logical spelling for Jayden.

A former favorite, Jeffrey would’ve been Geoffrey in the Middle Ages – think Chaucer – but today is all dad-name … and almost always spelled with a J.

A casual take on John.

The rapper known as The Game started out life as Jayceon Taylor. His name rushed up the popularity charts after he and his fiance debuted their VH1 reality series, Marrying the Game.

Take Jack and Max, combine, and then layer in favorites like Braxton to arrive at this new possibility.

Jameson with an I instead of the middle E.

A smooth take on Biblical Jonah, favored in northern Europe. It’s also the surname of the musical Jonas Brothers.

It sounds angelic – thank Raphael, Gabriel, Castiel. And Jahzeel is an Old Testament figure, though this spelling feels modern.

One more spelling for Jason, heaving influenced by Jayden.

Boy names ending with -amari are a white hot trendlet, so no surprise Jamari makes the list.

A take on Jamar, one of several invented names in long use with similar sounds.

The Spanish form of Julius.

Another cousin to James.

Julian with an E is favored in France; rare most other places.

Once upon a time, every James became Jim. Now they’re more likely to be Jamie – if they use a nickname at all, which is no longer automatic. And just like Charlie, Jamie also stands alone.

An older form of John, still heard in Scandinavia.

A virtue name popular for boys and girls alike since the 1990s.

Jackson turned up to eleven.

Another take on Josiah, one you won’t find in the Bible, but might appeal .

A surname name that owes something to Jameson, and maybe a little more to Hamilton.

An early 1940s favorite, sometimes short for Gerald, Jeremy, or another Jer- name, Jerry has fallen from its Top 20 peak. But just like so many midcentury names, Jerry will (eventually) return.

Sometimes a nickname for a boy named for his dad – think James Smith Jr. – Junior has a long history of use as a given name, too.

A go-to nickname for James, sometimes given independently.

A rock star surname name with swagger to spare.

Joseph has long been a popular name, often shortened to Joe. So why not just Joe?

Most likely an invented name, based on choices like Dakari.

Borrowed from a traditional Japanese folk tale, Jiraiya found a fresh audience thanks to manga and anime series Naruto. He’s a ninja and a toad sage in the new stories, playing on parts of the original tale.

Jon Hamm, Jon Stewart, and Jon Favreau are just a few famous bearers of the name who dropped the H.

A spelling used in Germany, Scandi countries, and, sometimes, in the US, too.

Back in the day, Jordan shortened to Jud. Give our love of Jackson and Hudson, Judson feels quite current.

Jacboy – a surname based on Jacob – has long appeared in the Top 1000, a cousin to the more-popular Zachary and Jeremy.

Inspired by names like Yadiel with Hebrew roots, Jadiel mixes tradition with our love of J names.

An Old Testament place name with a twenty-first century sound.

The most casual form of Joseph.

Jax is edgier than Jack, and Jaxx? Turns it up to eleven.

A phonetic-ish take on Giovanni.

Zakai, Makai, and, of course, Jakai.

From a Swahili word meaning brave.

An ever more creative take on Jaxton.

An Old Testament name with an upbeat meaning: he shines. Jairo and Jairus are options, too.

Another spelling of Jacoby, this spelling influenced by the late Kobe Bryant.

A European form of Jeremiah.

A name with Arabic roots and a weighty meaning: serious.

The French form of James, though it’s a little closer to Jack in American English. Jacqueline has been popular among girls names in the past, while Jacques remains under-the-radar in the US.

One of Noah’s three sons in the Old Testament.

A Jared-Gareth mash-up invented for David Bowie’s role as the Goblin King in 1986’s Labyrinth.

With Hebrew roots, Jaron might appeal to parents looking for something slightly different, but with meaning.

If you know your Avengers, Jarvis is Iron Man’s AI butler. But long before that, Jarvis was an English version of the Germanic Gervais, meaning spear.

In the Old Testament, Javan is Noah’s grandson, and ancestor of the Greeks.

Just like Jeb, but swap the B for a D.

As in Star Wars. If we name our kiddos Anakin and Kylo, why not the heroic Jedi, too?

Embraced by African American parents, Jelani appears to have Arabic roots. It rose originally thanks to a basketball player in the late 1990s. A more current influence might be author and journalist Jelani Cobb.

A surname name related to John, Jennings peaked in the late nineteenth and early twentieth centuries. That tracks with the career of populist politician William Jennings Bryan. Today it feels like an unexpected surname name.

Yes, Jerome. This traditional and long-used name no longer charts in the US Top 1000.

An older form of Julian, made familar thanks to the early twentieth century novels The Forsyte Saga, by John Galsworthy.

It could be short for Jordan, but in Cornish, Jory is the equivalent of George.

Another Old Testament rarity, Jotham appears twice – as a King of Judah, as well as one of Gideon’s sons. It’s made more wearable by easy nickname Joe.

Another name for Jupiter, king of the gods in Roman mythology.

A rarity from the Old Testament with an appealing backstory: he’s the first person to become a musician.

With Julian in the Top 100 and Julien rising fast, why not Jules? It’s the French form of Julius, made literary by trailblazing author Jules Verne.

The masculine equivalent of goddess name Juno, made familiar by writer Junot Diaz.

A Latin name meaning just, Justus looks like word name Justice, but has centuries of use behind it.

What are your favorite baby boy names starting with J? 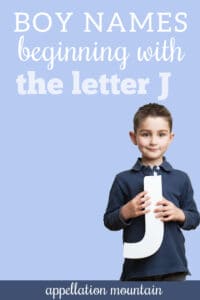 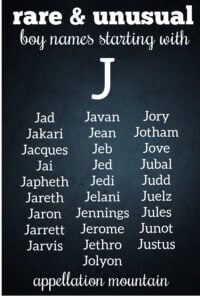 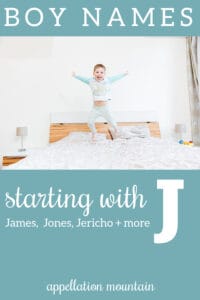