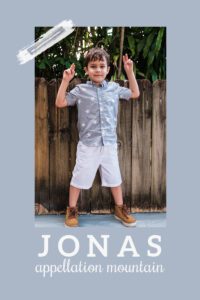 The baby name Jonas starts out in the belly of a whale, then rode a wave of popularity thanks to the Disney Channel.

Jonah comes from the Hebrew word for dove.

In the Old Testament, the prophet Jonah fled his responsibilities. He boarded a ship to cross the ocean, only to find himself caught in a storm. His fellow passengers suspected Jonah’s duplicity caused the weather, and tossed him overboard.

Instead of drowning, Jonah was swallowed by a big fish. We interpret this as a whale today.

Despite the odds, he escaped unscathed, landing on the shores of Nineveh. And Nineveh? That was the city Jonah fled in the first place.

It’s a great story, one rich with lessons about faith and duty.

When Protestant parents turned to the Bible for appropriate names, Jonah made an obvious choice.

The baby name Jonas is the Greek form of Jonah, but also widely used throughout Europe. It’s the Dutch, German, Czech, and Scandinavian version, and it’s heard in French-speaking countries, too.

In fact, a notable Jonas served as Bishop of Orleans way back in the late 700s and early 800s.

His farm inspired the name of the local river.

And from the river, the entire borough became known as the Bronx.

Both Jonah and Jonas coexist in English.

In our age of Noah and Elijah, Jonah feels like the more fashionable choice.

But s-ending boy names are rising. Jonas fits right in with Silas and Wells.

In fact, the baby name Jonas has ranked in the US Top 1000 every year since the data was first compiled for 1880.

Notable men have answered to the name. Jonas Salk, the virologist who developed the first polio vaccine, is among the most famous.

Another place that parents might hear the baby name Jonas?

The book’s 1992 publication helped lift the name just a bit. The dystopian novel imagines a society dominated by sameness. Only one person is trusted with the memories from an earlier time. For his generation, Jonas is chosen to fill the role of the Receiver of Memory.

It’s a bleak and scary story, but one that ends on a hopeful note.

Lowry’s Jonas is eclipsed by another association.

The Jonas Brothers launched their careers on the Disney Channel. Nick, Kevin, and Joe guest starred on Hannah Montana. They later headlined original movie Camp Rock and landed their own series.

The three graduated to full-on pop stardom, and each brother has recorded solo music since then.

Grammy nominations aside, the brothers’ success has not helped their surname catch on.

In fact, it’s probably hurting the baby name Jonas. If only because it’s impossible to hear Jonas and not automatically add “Brother” after it.

Of course, the musicians don’t own the baby name Jonas. With centuries of history and a stylish sound, it’s easy to imagine this sleek, traditional name wearing well on a son born right now.

What do you think of the baby name Jonas? 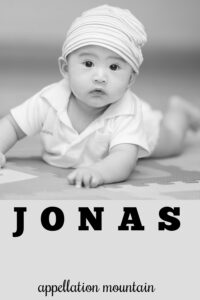