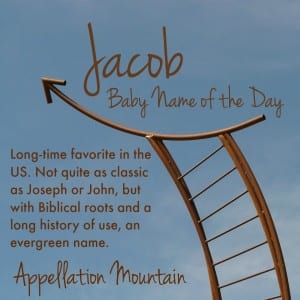 Today’s choice has been a long-time #1 favorite in the US.

Top Fifteen week continues with Jacob as our Baby Name of the Day.

In Greek, he was Iakobos, and in Latin, Iacobus. James also comes from the same roots.

And it’s a BIG name in the Old Testament.

The meaning is usually given as supplanter, since Jacob was the younger twin, but managed to inherit their father’s birthright instead of his older brother, Esau.

Jacob is the son of Isaac and Rebecca. His twelve sons founded the twelve tribes of Israel.

He appears in the Talmud and the Qu’ran as well. Jacob’s vision of a ladder leading to heaven is an important spiritual concept through the ages.

Jacob: Middle Ages through the 1800s

Through the Middle Ages, James was a name for Christians, and Jacob a name for Jews – at least in English.

That changed after the Reformation, and there are plenty of familiar Jacobs pre-twentieth century, from one of the fairytale-gathering Grimm brothers to Scrooge’s former partner in A Christmas Carol.

It was especially big in New York, thanks to the name’s popularity with Dutch settlers. Through the early years of the twentieth century, Jacob was a Top 100 pick.

It was a double name, too – think of John Jacob Astor, or John Jacob Jingleheimer Schmidt.

There’s no single event that explains the name’s revival. Jake is just as friendly as Joe and Jack, and Jacob is just as wearable as Joseph or John. But Joseph and John remained evergreen classics, while Jacob fell into disuse.

It’s impossible to list all of the famous men – real and fictional – who have boosted the name. A few early ones:

One oft-repeated theory that doesn’t hold up: Twilight made Jacob a #1 name. Taylor Lautner was born in 1992, the first Twilight book was published in 2005, and Lautner first appeared on screen as the hottie werewolf in 2008 – all events taking place long after Jacob was a favorite.

Today Jacob is perceived as a classic, and given his long history, deservedly so.

Jacob fell from the #1 spot in 2013, dropping to #3. It’s likely that this name will continue to drop, but it will likely be a slow and graceful descent, as many children will still be named after men named Jacob for years to come.

What do you think of Jacob? Is this name a modern classic, or a tired trendy name ready for a break?