Jesse brings to mind outlaws and athletes, but it’s impeccably Biblical, too.

In Hebrew, the original name is Yishai – gift.

It appears in the Old Testament, as father to the world-changing King David. Artists created elaborate charts showing the family’s genealogy, leading to the birth of Jesus, during the Middle Ages. They’re known as Trees of Jesse.

The art form flourished during the medieval period, in illuminated manuscripts and stained glass. But it didn’t stop there. Examples can be found over the centuries. And, in recent years, some Christians have embraced a Jesse tree at Christmas. During advent, it’s decorated with symbols leading to the birth of Jesus – though they’re more DIY craft than high art.

Despite this strong tie to religious history, the name doesn’t feel as expressly borrowed-from-the-Bible as Elijah or Noah.

Like most Old Testament names, it picked up in use during the Protestant Reformation.

History and pop culture combine to produce a fascinating list of notables.

Along with his brother Frank, Jesse James captured the public imagination as his gang robbed banks – and stagecoaches and trains and anywhere there was money to heist – in the American west during the nineteenth century. Even in his day, James was lauded as a modern day Robin Hood.

Too bad it wasn’t true.

Many leading men have played the part. That includes Brad Pitt, in 2007’s celebrated The Assassination of Jesse James by the Coward Robert Ford. Based on a 1983 historical novel, it’s considered more historically accurate than many earlier depictions.

Still, the name reads folk hero as much as it does criminal, and the buffer of more than a century helps.

Born in 1913, JC Owens would become Jesse while still a child. By the time he entered high school in Cleveland, Owens was winning national track and field events. As an Ohio State University student, he set at least three world records.

It all took him to the 1936 Berlin Olympics.

Adolf Hilter was in power, and planning to use the games to showcase the superiority of Germany – white, Aryan Germany. Instead, Owens scooped up medal after medal. As an African American, Owens’ triumphs demonstrated the painful, obvious flaws in Hitler’s arguments. While it didn’t change the course of history, it feels like a triumph, and is celebrated as one.

After a long run as a popular choice, it was fading when Owens’ star rose.

But it remained in steady use, never leaving the US Top 200.

And then came a spike in use, returning the name to the Top 100 in 1972, a position the name would hold right into the early twenty-first century.

What explains the name’s rise? My first assumption was wildly popular late 70s/early 80s television series The Dukes of Hazzard. Beau and Luke Duke were the brothers at the heart of the series, but Uncle Jesse was the family patriarch. (While the series doesn’t hold up terribly well by 2020 standards, the names proved surprisingly resilient.)

Except the dates aren’t right. Hazzard debuted in 1979, when the name was already a Top 100 staple.

However, a pair of 1971 movies used the name for characters – one, a re-telling of the James gang; the other, a spaghetti Western. There’s a notorious, still unsolved crime from the same era, which almost certainly grabbed national headlines.

Any of these – or a few other athletes, politicians, and musicians – might help explain the name’s rise.

Of course, Jessica dominated the US girls’ popularity charts, beginning a multi-year run as the most popular girls’ name. Jess was having a moment for our daughters and our sons alike.

By the end of the 1980s, John Stamos was answering to Uncle Jesse, too. He played the cool, motorcycle-riding member of the extended Tanner household on long-running series Full House.

Overall, this name emerges as a traditional, almost classic choice for a son.

It has a little bit of an edge, too – credit the criminal, but also the world-changing athlete.

But it’s not in the same category as Maverick or Legend. Jesse feels more like a brother for homespun boy names like Arlo and Ezra.

It’s a solid choice for families after something time-tested, but still plenty cool.

What do you think of Jesse? Would you consider the name for a son? 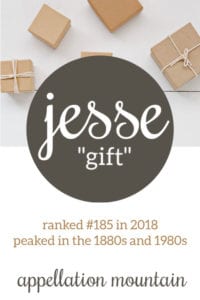