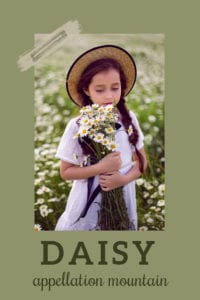 The baby name Daisy feels fresh and cheerful, but it also has a long history of use as a given name.

Thanks to Kristin for suggesting our Baby Name of the Day.

Like Lily and Rose, the baby name Daisy feels familiar on a child, but also immediately brings to mind the flower.

Daisies are usually white petals surrounding a sunny yellow center. Plenty of related flowers might be called daisies, and they extend the range of colors well beyond the conventional yellow-white.

The scientific name is pleasing, too – bellis perennis, everlasting beauty.

Medieval Latin knew it as the sun’s eye – solis occulus.

Daisy comes from the Old English daes eage – day’s eye. Chaucer called it “eye of the day.” The yellow center symbolized the sun, with the flower closing at night and re-opening in the light of day.

Other names were used for the flower over the years, including Mary’s Rose and the far less charming bruisewort.

Victorians loved a flower baby name. If they were willing to press choices like Gladiolus and Buttercup into use, then the baby name Daisy wasn’t a stretch.

They also believed that flowers conveyed specific sentiments. In the language of flowers, daisies meant hope. That’s a powerful message. They also conveyed innocence and purity.

Books of floriography were published to ensure that anyone giving or receiving flowers would understand the message conveyed. Daisies seem sweet and uncomplicated – a fitting message for a familiar flower.

Margaret comes from the Greek word for pearl.  The French form of the name – Marguerite – became associated with the flower.

How, exactly, is up for discussion. It’s said that daisies were the “pearls” of the field, and so became known as marguerites. Or maybe they look like pearls when they’re all closed up for the night.

In any case, it’s not a new association. When French-born Margaret of Anjou married King Henry VI of England in 1445, her wedding dress was embroidered with daisies. The connection remains in royal families, as well as their jewels and clothing.

Charlotte Yonge’s 1856 novel The Daisy Chain featured a Margaret called Daisy. And Louisa May Alcott eventually gave the grown-up Meg a daughter called Daisy, too – even though they’re both actually Margaret.

In the decades since, it’s become an accepted formal name-nickname connection.

At the end of the nineteenth century, the baby name Daisy peaked in popularity.

By 1925, Daisy Buchanan was the girl who for whom The Great Gatsby pined. We’ve been reading the novel in English class – and watching movie adaptations – ever since. In 1974, Mia Farrow played the role of Daisy, with Robert Redford as Jay Gatsby. In 2013, it was Carey Mulligan and Leonardo DiCaprio.

Speaking of movies, the baby name Daisy has risen and fallen against the backdrop of popular culture.

Henry Dacre penned “Bicycle Built for Two” in 1892. That, combined with the Charlotte Yonge and Henry James novels, likely explains the name’s peak popularity in the late nineteenth century.

The name slowly fell, and the name’s image changed.

In 1934, comic strip “Li’l Abner” gave us the stereotyped Southern hillbilly Abner Yokum and his long-time love, Daisy Mae Scruggs. The fictional couple married in 1952, with such fanfare that it made the cover of Life magazine – but it didn’t inspire real parents.

After all, in the 1950s, the Margaret name to watch was Peggy.

The comic strip was followed by Disney’s Daisy Duck. And then, back in the South, we met Daisy Duke on early 1980s television hit The Dukes of Hazzard. Ever heard high cut shorts referred to as daisy dukes? They’re named for the television character.

When The Dukes of Hazzard debuted in 1979 Daisy failed to rank in the US Top 500. By 1980, though, the name was climbing modestly. (In fact, it’s surprising how the small town country names of the series have become parent favorites forty years later, even as much of the show is seen as hopelessly dated – to say the least.)

In 1989, Driving Miss Daisy became a hit, eventually winning the Academy Award for Best Picture. The name rose a little more. Perhaps it signaled something critical: the movie starts in the 1940s, when Daisy Werthan is in her 70s. That made the name Daisy pitch perfect for the character – it would’ve been popular back when she was born. But it also reminded us that Daisy had survived the 100-year test. It was ready for revival.

After all, 1989 is also the year we met Princess Daisy in Super Mario Land. She started out as someone for Mario to rescue, but since then has evolved into a sparky, tough, and capable figure.

And that’s just a few.

But perhaps that’s about to change.

Perry dropped hints to her daughter’s name. She released a song titled “Daisies” while pregnant, and was frequently seen wearing clothing and jewelry featuring the flower.

Overall, the baby name Daisy is darling. It reads like an ecovintage pick, antique and charming. But it’s also upbeat and cheerful, a name that fits right in with Sadie and Ellie and all the names we’re choosing for our daughters now.

What do you think of the baby name Daisy?