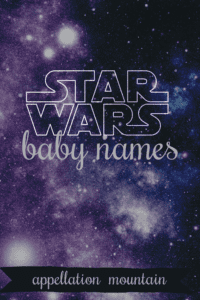 Star Wars baby names range from the classic to the wild, with everything in between. Whether you’re inspired by a character’s heroics, or just plain love the sound, the perfect choice for your child could come from a galaxy far, far away.

As sci-fi names go, the Star Wars lexicon isn’t quite as cohesive as many other universes. Perhaps that’s because they’ve evolved over so many decades, with the first movies developed in the 1970s, and new worlds and series and characters introduced today. Or maybe it’s because there’s no JK Rowling or George RR Martin, the forces behind Harry Potter and Game of Thrones that ensure a certain shared sensibility across their characters’ names.

That said, there are still commonalities across the names in any invented ‘verse. They tend to borrow heavily from traditional choices as we know them today, so Harry exists in the same world as Mundungus; Jon along with Sansa. We sometimes borrow words that aren’t quite names as use them that way – like Khaleesi, or, from this list, Jedi.

The other fascinating trait? Star Wars baby names feel far more socially acceptable as we head into the 2020s than they ever did when the very first movies hit the big screen. Science fiction is the new soap opera – the engine of slightly out-there, but still socially acceptable baby names.

Debate surrounds the origins of Darth Vader’s birth name, but we know this for certain: it’s been rising in popularity for years. Talk of the new prequel trilogy in the 1990s seems have sparked interest in Anakin, but it was mentioned as early as 1983’s The Return of the Jedi. Fun fact: before this was the name of Luke’s father, original drafts called for the hero to be named Annikin. But things changed before the final draft. Despite belonging to a legendary villain, a stylish sound makes it more wearable than you might imagine.

We met Cassian Andor in Rogue One, the stand-alone movie released in 2016. He’s a straight-up hero, along with Jyn Erso, who lays the groundwork for the original trilogy. Diego Luna played the role, and he’s set to reprise it for a Disney+ series coming in late 2019 or 2020. Unlike Anakin, Cassian is no invention. It’s an old Roman family name, a cousin to Cassius, worn by several early saints. You might shorten it to edgy nickname Cash, or use it in full, a less common alternative to Julian or Adrian. And less common is right – it’s never appeared in the US Top 1000.

One of the most perfect first-last combinations in all of the galaxy comes from Star Wars Rebels, a Disney Channel animated series. An orphan living on the streets, he becomes a Jedi Padawan, and an early hero of the Resistance. The series debuted in late 2014, when Ezra was already rising fast. But the popularity of the show seems to have given it a boost, pushing Ezra from quirky outsider name to mainstream favorite. With the razor-sharp sound of Z, and literary tie-ins, there are reasons galore to embrace this name. And don’t count out Bridger, either. While this name owes more to legendary frontiersman Jim Bridger than the Star Wars figure, the association doesn’t hurt.

Finn has always been a hero, from Irish legend’s Finn McCool to the blockbuster movies of today. John Boyega plays the Star Wars character. When we meet him, he’s a Storm Trooper who questions his programming, refusing to follow orders and choosing to escape instead. His name comes from his serial number: FN-2187. Finn becomes a hero of the new trilogy, and he’s done yet. Like Ezra, the name was rising well before we met the character, but it seems to have boosted it even farther.

Maybe this is a stretch, because there’s no one named Jedi in all of the Star Wars universe. Jedis are knights, a sort of warrior-monk. Over the series, they’ve been selfless philosophers and deadly fighters. They’re born, not made – to become a Padawan apprentice, they must exhibit sensitivity to The Force. Years of training follow. So it’s a title more than anything, and yet, parents are using it in small numbers for their sons. It might have started as a nickname for Jedidiah, or maybe a Jed-Levi mash-up. Over 150 boys have received the name in the twenty-first century, so while it remains rare, it has quite a bit of appeal as one of the Star Wars baby names.

Scottish surname Kyle hit the US Top 25 in the late 1980s and 90s, and inspired spin-offs like Kyler. So maybe it’s no surprise that this baddie’s name from the newest trilogy appealed. Kylo merges Kyle with the modern style of Arlo and Milo, too. We know that the character must have chosen his name at some point: Kylo Ren was born Ben Solo, son of Han and Leia.

Like Kylo for Kyle, Lando reads as an update to Landon. Though the character debuted all the way back in 1981’s The Empire Strikes Back, years before Landon became a fast favorite. Meanwhile, Lando has never broke into the Top 1000. But don’t count the name out. The opportunistic Lando Calrissian is played by Billy Dee Williams in the original trilogy, and by a charismatic Donald Glover in the 2018’s Solo. Could the new take on the galactic gambler boost the name? And Billy Dee Williams reprised the role in the 2019 sequel, so let’s say it’s a longshot – but still a maybe.

A futuristic re-spelling of Leah, when we meet Leia she’s nothing more than a hologram. Today, she’s a full-on hero, a high-minded princess turned battle-tested general. Her trademark A New Hope hairstyle is nothing short of iconic. As for the name, it just plain fits in our age of Layla and Lily, Maya and Elena. Parents might have once avoided it as too tied to the character, but today that’s less of a concern. One more note: this spelling is seen as far back as the Greek version of the Old Testament.

Back in the day, Luke authored one of the books of the New Testament. The early saint’s name is almost certainly borrowed from the map, but it brings to mind the Latin lux – light, too. Appropriate for the most famous figure to ever wield a lightsaber, right? The name was already seeing more use when A New Hope came out in 1977. But it didn’t soar; instead, it took a generation of children who grew up loving the movies before it really caught fire – just like his twin sister Leia’s name.

Up until Star Wars gave us the most recent movies, Poe referred to one figure alone: the master of Gothic fiction, Edgar Allan Poe. He pioneered many of the modern concepts we know in story-telling today, including detective stories and science fiction. In the 1990s, Po was one of the Teletubbies, meant for toddlers. But now Poe Dameron is yet another take. He’s a Resistance leader and a fighter pilot, a tough guy – and a good one, too. With Beau on the rise, perhaps literary Poe isn’t miles away.

Rey is the twenty-first century Luke, an orphan with an unexpected destiny. It’s appropriate that her name mirrors his: short and strong, and with a link to light. After all, Rey sounds like ray of light. But if Luke was a saint, Rey is a ruler – her name is the Spanish word for king. It’s also brief and modern, in the key of Jyn Erso of Rogue One fame, suggesting that many a space age appellation will be minimalist – or at least the Star Wars baby names are!

Current US popularity rank: Sabrine is unranked; Wren is #428

Does Star Wars Rebels have The Best names in the whole galaxy? I think maybe yes, because not only is there Ezra Bridger, but there’s also Sabine Wren. She’s a Mandalorian by birth, an expert in weapons, fierce and brave. Sabine turned her back on her Empire-loyal family to join the Resistance. This tracks with the name’s history – the Sabine people were subjugated by the Roman Empire. While the name has never been common in the US, it’s given to around 100 girls annually – a fits-in, stands-out choice with a heroic pedigree. As for Wren? It’s a nature name that’s soaring, among the most popular of the bird-inspired possibilities for our daughters.

Tallie appears in just one short story arc in 2017’s The Last Jedi. She’s one of the most talented fighter pilots in the Resistance, a farm girl intent on taking her shot. In the movie, she’s only listed as Tallie. But in the novelization, we get her full name: Tallissan Lintra. It’s an invention, I’m sure, but it highlights what’s so great about Star Wars names. They’re twists on the familiar, a little bit Talia, a lot of Allison, a name that feels at-home in our world, but also out in space.

What are your favorite Star Wars baby names? 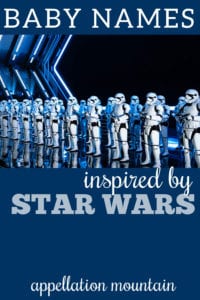