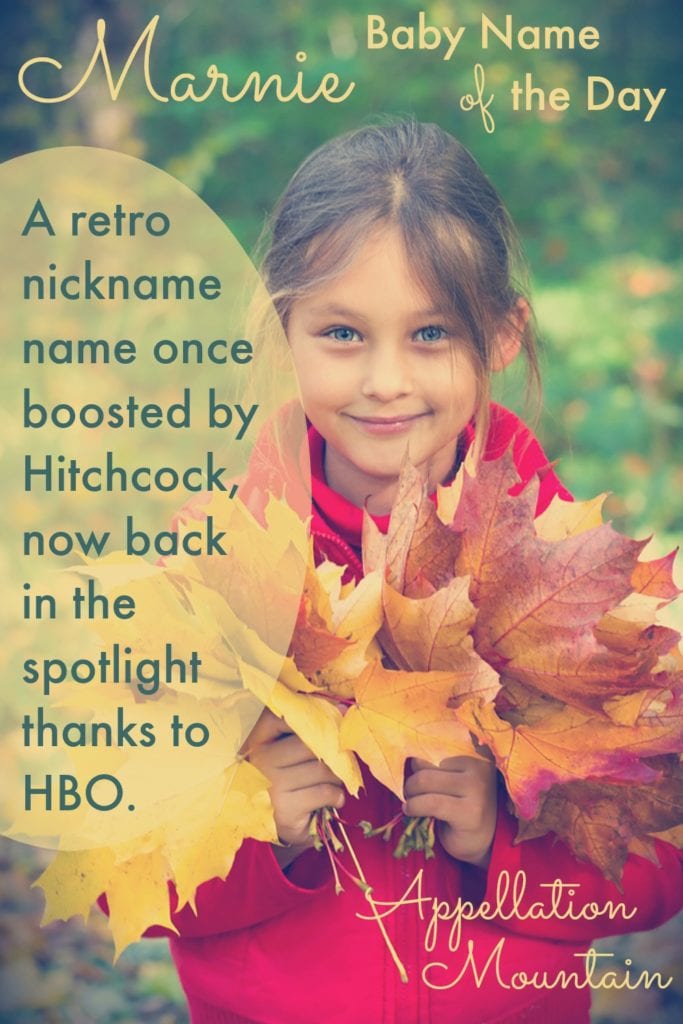 Thanks to M. for suggesting our Baby Name of the Day.

This one sounds like a nickname – but for what?

It seems like it was often used with Margaret – though there’s no formal connection.

Instead, it might come from Marna and Marina. Marina occurs in most European languages, either as a feminine form of Roman family name Marinus, or possibly from the Latin word marinus – of the sea.

The name also means rejoice in Hebrew, with Marnina often listed as the longer form, and Marni often listed as another spelling. And yet, that feels backwards, doesn’t it? In American English, -ie and -y endings are dominant, with -i endings often – though not always – dismissed as cutesy innovations, like Ashli.

Tippi Hendren played the title role. Hendren’s character lies, embezzles, and changes her identity as needed. Until, that is, she meets Mark Rutland. Mark suspects she’s up to something from the first, but hires her at his publishing company anyhow.

When Marnie repeats her take the money and run act, Mark chases her down – and insists she marry him. Drama follows.

Marnie: By the Numbers

As the Hitchcock movie faded, so did the character name. By the late 1990’s only a dozen or two girls received the name every year.

The Disney Channel gave us the first installment in the Halloweentown series back in 1998. The series now includes four movies, between 1998 and 2006.

When we first meet Marnie Piper she’s thirteen, and frustrated that she and her younger siblings must sit out every Halloween. That’s because her mother, Gwen, left the magical realm – Halloweentown – to raise her children in the mortal world. Everything changes when grandmother Agatha visits, determined to train her granddaughter as a witch.

Adventures follows, and by the fourth movie, Miss Piper is all grown up and enrolled at Witch University in Halloweentown proper.

And then there’s Girls. The HBO original series debuted in 2012, starring creator Lena Dunham as one of four young women living in New York City. That sounds fluffy, but it isn’t – the show delivers plenty of complicated, but real-life scenarios.

A sixth and final season of the series will debut in 2017. From the first episode, Allison Williams has played Marnie Michaels, best friend to Hannah, Dunham’s character. Both Oberlin College grads, they start out as roommates. By the most recent season, Michaels was working as a musician and had recently tied the knot – but her marriage is already on the rocks.

Despite the Girls character, there’s something about this name that still leans retro. I think of Marni Nixon – born Margaret – a singer-actress from the 1950s and 60s.

But that’s not necessarily a bad thing. English singer Lily Allen welcomed daughter Marnie in 2013, a little sister for Ethel.

As we prepare for the next wave of revival names, it’s reasonable to assume that this might make the list. But with only 23 girls given the name in 2015, there’s still a long way to go before we consider this one back.

Do you think Marnie feels ready for revival?