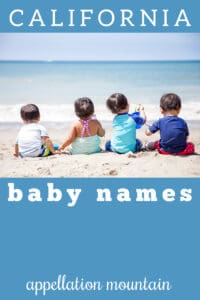 California baby names blend all sorts of influences – the counterculture of San Francisco, the coastal vibe of beachfront towns, Hollywood glam, and more.

The most popular baby names in California show heavy influence from Spanish culture and language. Even if you’re not a native speaker, the Latino community is a big part of the state’s history and heritage – and has been since the very earliest days. From street names to businesses, the influence is woven throughout the state.

Of course, California is a massive state, bigger than Japan or the UK. It’s the world’s sixth largest economy.

So California baby names? They have a lot of influence.

But this list isn’t just about the most popular picks. It’s also about the less expected choices. Place names and heritage finds that might be exactly right for a family with roots in the state – even if they now live elsewhere.

CALIFORNIA as a BABY NAME

And, of course, California might be a given name.

Despite the state’s considerable influence on pop culture, it’s relatively rare as a given name. Just ten girls were named California in 2021.

The name first debuted in US data way back in 1918, with six girls receiving the name.

It has never been given to five or more boys in a single calendar year, which makes it so rare that the US Social Security Administration does not report data.

Just Cali, a popular nickname for the state, has been popular for girls. But it’s tough to separate the many reasons parents might consider Cali – or Callie, Kallie, or Kali – from California itself.

As it happens, California comes from a given name.

In the novel, Calafia is the name of a pagan warrior queen, ruling an island named California. Esplandián fights on the side of the Christians, defending Constantinople from Muslim forces.

Calafia leads an all-female army, along with their trained griffins, into battle on the Muslim side.

However, Calafia is taken prisoner. She eventually converts to Christianity and marries a Christian soldier, before returning home to rule her kingdom.

Calafia comes from the Arabic khalifa – caliph, or ruler.

While we’ve forgotten the details, Calafia is still depicted as the spirit of California.

That said, no one is naming their daughters Calafia, at least not in the US.

The former favorite name in the US is still on top in California.

We think of Liam as Irish, but it’s also very popular with Spanish-speaking families.

The Spanish form of Matthew, and another clear signal that the Spanish language influences names choices throughout the state.

Saintly and traditional, Sebastian has become a new favorite in recent decades.

Another names with decades of use, now more popular than ever before.

This time, California parents match up pretty closely with the US averages.

Something had to fall in use to make space for Mateo, Sebastian, and Julian.

Like Oliver, Elijah is still used in big numbers in the Golden State – just not quite as big as some other names.

While Alexander has left the Top Ten elsewhere, it still ranks in California.

Classic Daniel shares something in common with Sebastian and Liam. It’s long been popular with Spanish-speaking parents, likely explaining the name’s better-than-the-national-average rank in the state.

Tops across the US, and in California.

Once again, Californians agree with rest of the country.

The first clear influence from the Spanish language is Camila’s sky-high #3 rank.

Combined with fellow Top Ten name Sofia, this name would easily leapfrog ahead of Olivia.

A new favorite for families looking for bilingual English/Spanish names, Luna seems destined to make the broader US Top Ten soon, too.

As with Oliver and Benjamin, Amelia isn’t unpopular in California – it’s just pushed aside by some California favorites.

Add it up with Sophia, and this name is everywhere on the West Coast.

The tragic loss of Kobe and Gianna Bryant pushed this name into broader use, particularly in their home state of California.

It’s paradise in the legends of King Arthur, a ground-breaking Roxy Music album, and the only incorporated city on Santa Catalina Island, California.

Located across the San Fransisco Bay, Berkeley is a place name and an academic one, too, thanks to the prestigious University of California, Berkeley.

Way back in 1876, gold was found in Bodie. It quickly became a boom town, and just as quickly faded to ghost town status. But it endures as the Bodie Historic District, a National Historic Landmark. It’s named for prospector WS Bodey, whose named was misspelled on a sign.

Officially named Carmel-by-the-Sea, the picturesque coastal town has long been a haven for artists and writers.

A city in the Sacramento Valley, Davis is known for agriculture, as well as the University of California, Davis.

Visit the City by the Bay, and the name is everywhere. There’s a Saint Francis hotel and a hospital. That’s because Spanish settlers first built the Mission San Francisco de Asís, founded in 1776. It’s the heart of the city’s Mission District today, though if you visit the original settlement, you’re looking Mission Dolores. That’s because a nearby creek was named after Our Lady of Sorrows.

Even if you’ve never been to Los Angeles, chances are you’ll recognize Griffith Observatory, standing on the south slope of Mount Hollywood in Griffith Park. From the 1930s to Rebel Without a Cause to La La Land, it’s appeared in many an iconic movie scene. It’s also quite close to the Hollywood sign. Opened in 1935, it’s named for the philanthropist Griffith Jenkins Griffith – not a typo! – who gifted the land to the city.

Located in the heart of the Coachella Valley, this former railroad town is now internationally famous as the location of the annual festival. Robert Downey Jr. named his son Indio way back in 1993. The only challenge? Is the name’s meaning – it’s the Spanish word for Indian – problematic? In our age of kids named India and Indiana, probably not, but it’s worth consideration.

Maren is a fast-rising favorite for our daughters, but Marin – as in the county northwest of the San Francisco Bay – is pronounced differently. Stories about the county’s name vary, but many suggest that it was named for Chief Marin. The indigenous leader adopted the name Marino on his baptism.

As in Santa Monica, one of the many notable California places named for a saint.

Known as California’s first city, Monterey was named for the Spanish nobleman Don Gaspár de Zúñiga y Acevedo, 5th Count of Monterrey, governor of New Spain who ordered the map-making that necessiated naming the place. That’s right – between the nobleman and the location, Monterey dropped an R.

Way back during the Gold Rush, Shasta was a bustling town. While those days are long gone, the Shasta State Historic Park remains. CS Lewis gave the name to a male character; the Shasta daisy makes it feminine.

San Simeon is perhaps most famous as home to the Hearst Castle. Built as a family home for the wealthy Hearst family, it has long been a historic landmark and museum.

Boy Meets World put this unusual place name on parents’ lists. It means “where the mountain meets the sea” in the Tongva language. But for an entire generation, Topanga means Cory’s future wife, thanks to popular 1990s ABC series Boy Meets World.

At first glance, it’s a twist on Terrence. Except Torrance, California sits in Los Angeles County. The name comes from Jared Torrance, the real estate developer who created the community in the early 1900s. It caught parents’ attention when Kirsten Dunst played a cheerleader by the name in 2000’s Bring It On.

NAMES FROM CALIFORNIA HISTORY and SYMBOLS

The California Grizzly Bear is, sadly, extinct, but it lives on as the state’s official animal, depicted on the flag and seal, as well as countless souvenirs for the state.

The state’s two official colors are blue and gold; in addition, the blue diamond is the state’s official gem. Blue, however, doesn’t immediately shout California the way the other official color does.

The Golden State’s second official color is, naturally, gold. There’s the Gold Rush. The Golden State Warriors. The University of California, Berkeley’s Golden Bears. The official fish is the Golden Trout. It’s a glittering name that feels very tied to the state’s history and identity.

Borrowed from the Calafia story.

The state’s flower is the poppy, a name that’s gaining in popularity for girls throughout the English-speaking world. We think of it as a rich, vibrant red, but the echscholzia californica is also known as California sunlight, or the golden poppy.

This list could go on for pages, but let’s start with Andre Young, known to the world as Dr. Dre. Famously from Compton, California, Dre has graduated to elder statesman of rap music. Somehow that makes this French form of Andrew feel like something specifically Californian.

Perhaps the most famous landscape photographer, Ansel Adams often captured the staggering beauty of the state. A San Francisco native, his photographs of Yosemite National Park are instantly familiar. Beyond his art, Adams was a noted conservationist, awarded the Presidential Medal of Freedom in 1980 for his environmentalism.

Legendary designers Charles and Ray Eames changed the very look of the built environment with their groundbreaking furniture designs. The husband-and-wife duo’s surname fits right in with so many s-ending boy names we love today. Her name is interesting, too. Ray was born Bernice Alexandra Kaiser, but her childhood nickname – Ray – stuck.

Yes, it’s an Old Testament name. But it’s very blue jean, too. The iconic denim company began in San Francisco 1853, when entrepreneur Levi Strauss realized that he could sell pants – lots of pants – to those seeking their fortunes in the Gold Rush.

Plenty of parents have been inspired to name their daughters after the legendary, world-shaking poet and author Maya Angelou. While she didn’t move to California until she was a teenager, Angelou has a very state-specific claim to fame: she was the very first woman  of color to serve as a streetcar conductor in San Francisco.

Illinois-born Ronald Reagan moved to Hollywood and became an actor, and then governor of California, and eventually, the 40th President of the United States.

Wallis Annenberg isn’t a household name like the poet or the president, but her name is distinctive – and very present in Los Angeles today. Born in Philadelphia, she serves as chairman of the Annenberg Foundation, a philanthropic organization focused primarily on the Los Angeles area. Visit Beverly Hills as you’ll see the Wallis Annenberg Center for Performing Arts – widely known as The Wallis.

Do you have a favorite California baby name? 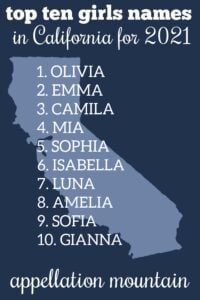 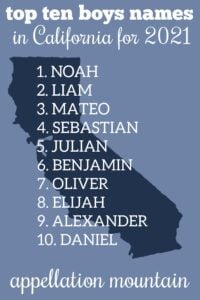 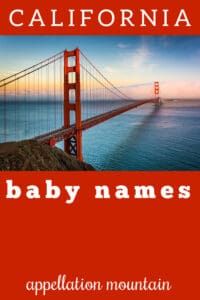