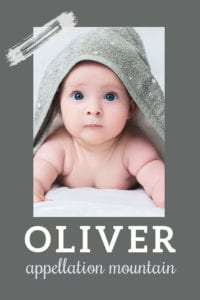 The baby name Oliver stands out as a favorite for boys, a classic that’s never been more in fashion.

Like many a medieval name, this one claims Germanic roots. It likely comes from Alfher or Alfihar, meaning elf army. Or maybe it’s cousin to Alvar, elf warrior.

Why were parents keen to name their children after elves? We’ve long considered elves supernatural creatures, capable of helping or harming mankind.

The fierce soldiers we meet in Tolkien’s novels seem closer to the mark that the Elf on the Shelf that visits households in December.

Olive branches have long symbolized peace. The Latin oliverus influenced the spelling of fierce Alfher. Or maybe two separate names merged into one. The French word for an olive tree is Olivier; that’s also the French form of the given name.

Back in the 1100s, Olivier was friend and advisor to Roland in the famous French poem, best known as The Song of Roland. Cautious and wise Olivier serves as the foil for the daring – and sometimes reckless – hero, Roland.

The Normans brought the name to England, and while Oliver never reached the same heights of popularity as William or John, the name became widely used.

If you know your history – or even your Elvis Costello songs – Oliver Cromwell might come to mind. Cromwell led the overthrow of the monarchy in England – at least for a little while.

He died in 1658 of natural causes, and by 1660, Charles II – son of the monarch Cromwell dethroned – had returned to England as king. Cromwell’s body was exhumed and he was posthumously executed.

It’s not clear if the name rose and fell in use along with Cromwell. It wasn’t especially common in the first place.

Fast forward to 1838. Charles Dickens’ novels come with rich social commentary. Orphans suffered, leading bleak lives in workhouses in nineteenth century England. Dickens would become a tireless campaigner for social reform, as well as a literary giant of the Victorian era and beyond.

Twist tells of a child born into poverty, his mother dead and father unknown. He spends time at a workhouse and as an apprentice, almost always hungry and ill-treated. After he escapes to London, he’s caught up in a life of petty crime. It’s bleak.

And yet, most of us know the story differently. That’s because the novel is oft-adapted. In 1960, the book became a cheerful, upbeat musical titled simply Oliver!

The musical inspired a 1968 movie adaptation, which won the Academy Award for Best Picture, along with nearly a half-dozen more.

Feel free to hum along to “Consider Yourself” as you read on.

Erich Segal’s novel Love Story debuted in 1970, and became a runaway bestseller and then a smash hit movie starring a young Ryan O’Neal.

O’Neal played Oliver Barrett IV, privileged and preppy and enrolled at Harvard like all of the men in his family before him. He falls for Ali McGraw as Jenny, whipsmart and street-smart, attending Radcliffe on a scholarship. Despite his family’s disapproval and all the conflict their different backgrounds bring, they marry.

The most famous line, of course, is “Love is never having to say you’re sorry.” This one appeals, too: “I love not only you yourself. I love your name. And your numeral.”

Speaking of numerals, what did all of this mean for the baby name Oliver’s use in the US?

In the late nineteenth century, Oliver regularly appeared in the US Top 100. Poet Oliver Wendell Homes, Sr. was born in 1809, and his son and future Supreme Court justice in 1840. Comedian Hardy followed in 1892, along with plenty of other notables.

The name faded in the twentieth century, nevermind the musical sensation.

But Love Story? That changed things. For the first time in decades, Oliver climbed, rising from the 400s into the 300s.

Only it didn’t last.

Instead, during the 1970s and 80s the name read differently. We recognized it as traditional, but also found it quirky and offbeat.

The smash hit television series debuted in 1969. As the six Brady kids reached young adulthood, the show introduced a new kid – Cousin Oliver, Carol’s nephew whose parents were living abroad. Not only did the new cast member fail to save the show – it was cancelled the same year – but it gave rise to the term “Cousin Oliver Syndrome,” used to describe the addition of a new baby to any long-running series.

Played by Robbie Rist, the character is meant to be darling and adorable, introducing all sorts of hilarious complications to the existing bunch of Bradys. He’s small and bespectacled and undeniably cute, but long-time fans of the show also saw him as an unwelcome distraction. If the other Brady kids had names that felt like mainstream favorites – Gregory, Peter, and Robert were solid, Top 100 choices in the era – Oliver was an outsider, in every sense of the word.

Of course, this name exists as a surname as well as a given name. You might think of jazz great King, celebrity chef Jamie, television personality John, or a dozen other athletes, actors, and other notables.

And while it wasn’t wildly popular during most of the twentieth century, we can think of famous figures galore: filmmaker Stone, actor Platt – who played an Oliver on The West Wing in the 90s, and more.

INTO THE TOP TEN

We’re wild for Olivia, a Top Ten girls’ name for nearly twenty years. So it’s no surprise to see Oliver rise, too.

With history galore, this name feels traditional, but not quite mainstream. It fits so many trends: the ‘v’ sound; the letter O; and there’s even a small-screen tie-in, thanks to superhero series Arrow.

That’s really the name’s only drawback: that it’s so on-trend that plenty of parents have discovered the baby name Oliver already.

From Charles Dickens to The Brady Bunch to a playground near you, the baby name Oliver blends the literary, the slightly different, and the oh-so-popular, too.

What do you think of the baby name Oliver? 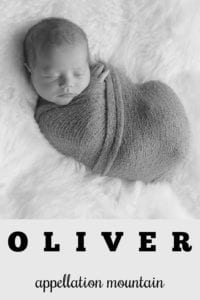