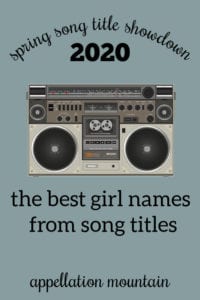 So many of you were kind enough to mention that March Madness Baby Names had been a welcome distraction over the last few weeks. And a few asked if I’d considered running something else to take your minds off all of the everything.

And so here it is! The Spring Song Title Showdown.

What’s that, you ask?

We’re going to vote for our favorite girl names from hit songs. You can complete your ballot based on the songs you know and love best, or make it all about the names. Or maybe balance out both considerations – it’s up to you!

We’ll finish this up by Tuesday, April 28th – because we’re expecting baby name popularity data on Friday, May 8th. You can’t ask for a better distraction that that!

Narrowing this down to just sixteen names was crazy hard! But here we go:

While I dropped so many personal favorites from this list, I tended towards songs that we’ve probably all heard. Maybe we can all hum. And ones that I know have influenced children’s names. Plus, if a name appeared in multiple songs, over many decades and across genres? Those names made the list. (I’m looking at you, Ruby, Valerie, and Roxanne – three names I’ve wanted to write more for ages.)

The Beatles’ trippy “Lucy in the Sky with Diamonds” comes from legendary album Sgt. Pepper’s Lonely Hearts Club Band. It’s colorful and vibrant. The “Valerie” I’ve referenced here was first recorded by British band The Zutons, but made a mega-hit by the late Amy Winehouse.

So many songs mention Mary, but I’m partial to Jimi Hendrix’s “The Wind Cries Mary,” a 1967 song inspired by a fight Jimi had with his then-girlfriend. Traditional Mary faces more modern Delilah. The Plain White Ts scored a breakout hit with “Hey There Delilah,” released in 2006.

Choosing just one Ruby song feels impossible, but The Rolling Stones’ “Ruby Tuesday” goes all the way back to 1967, so it’s the one I’m referencing for this contest. (Though I’m a sucker for this one.) As for Iris? No question, that’s the Goo Goo Dolls’ 1998 smash hit. “Iris” was recorded for the movie City of Angels – though there’s no character by the name in the movie. (Meg Ryan plays Maggie.)

Even if you stay miles away from popular music, Neil Diamond’s 1969 anthem “Sweet Caroline” is probably familiar. A staple at sporting events and karaoke bars alike, the song may have been inspired by former First Daughter Caroline Kennedy – or not. As for Ava, that’s borrowed from Smashing Pumpkins’ haunting “Ava Adore.” It’s not the band’s biggest hit, but it coincides with the name’s launch, climbing from #618 in 1997 to the Top 100 in 2002, and the Top Ten in 2005.

Simon and Garfunkel’s 1970 “Cecilia” is upbeat and infectious. Like “Sweet Caroline,” you know this song – even if you don’t now it. As for Roxanne, it’s the name of a 1978 hit single from The Police, but I’m thinking of a different song. UTFO scored an early rap hit with 1984’s “Roxanne, Roxanne” and ignited the Roxanne wars – nearly a dozen response songs from other rappers.

Eric Clapton’s “Layla” was a smash hit power ballad in 1970 – and a romantic, moody acoustic hit in 1992 after Clapton performed it on MTV Unplugged. Both versions boosted the name, but it really caught on after the second rendition. As for Maggie, that’s Rod Stewart’s “Maggie May” from 1971. I didn’t expect to see any impact on Maggie’s popularity – after all, a great  many Maggies are Margarets. But there it is, a clear increase in just-Maggies following Stewart’s chart-topping single.

Dolly Parton’s “Jolene” is the kind of song that just begs to be sung. I can’t see the name without hearing it in my head! The 1974 single is among Dolly’s biggest hits. There’s really only one “Jolene.” But there are multiple Glorias. Laura Branigan’s 1982 single might have made a bigger splash, but I’m thinking of U2’s 1981 “Gloria,” a song as enduring as the band.

These two 1970s songs celebrate very different names. No one was using the name before Fleetwood Mac’s “Rhiannon” debuted in 1976. But Beth was established, a popular short form for classic Elizabeth, long before Kiss released “Beth,” also in 1976. Though there is a tiny spike in the name’s use following the single’s release.

Voting will stay open until Friday morning, April 17th. Check back to see if your favorites advance, and, of course, to vote in the next round! 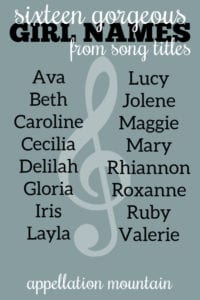 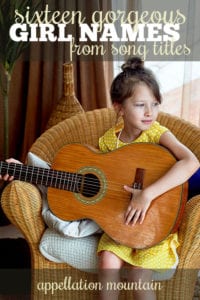