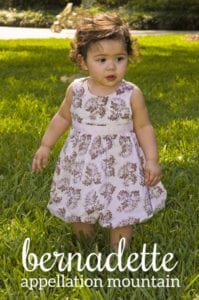 Could Bernadette be the newest vintage revival?

Thanks to Leslie for suggesting our Baby Name of the Day.

BRAVE AS A BEAR

Bernard Sanders was born in 1941. You know him best as the senator from Vermont, and a candidate for Democratic nomination for the presidency. While his name sounds distinctive today, Bernard ranked in the US Top 100 every year from 1880, when data is first reported, well into the 1940s.

It comes from the Germanic bern – bear – plus hard – brave. So that’s quite the meaning.

The Normans brought Bernard to England, where it meshed with a similar Old English name.

It’s remained in steady use across Europe thanks to the French-born St. Bernard of Clairvaux. The twelfth century abbot and mystic is considered a Doctor of the Church.

The feminine form of Bernard, in French, simply requires adding an ‘e’ to the end, though often such names are paired with Marie. Josephine, future Empress of France and wife of Napoleon, was born Marie-Josephe.

Born a poor miller’s daughter in the foothills of the Pyrenees in 1844, Marie-Bernarde Soubirous would have a lasting impact. At just fourteen, she started to experience visions of the Virgin Mary in a grotto. It eventually became a place of pilgrimage to Our Lady of Lourdes, and the water from the spring is said to miraculously heal all manner of maladies.

A few years following her experience, she joined a religious order. She was called Bernadeta or Bernadette in every day life, and we know her as Saint Bernadette.

The apparitions at Lourdes began in 1858, which probably explains why Bernadette ranked in the US Top 1000 most years from 1880 onward.

Following her 1933 canonization,  Bernadette spiked in use. It quickly reached the US Top 300 for the first time.

But it took something more to push this name into the Top 200.

During World War II, playwright Franz Werfel and his wife were Jews fleeing the Nazi regime. At great personal risk, the townspeople of Lourdes gave them shelter. Werfel learned the saint’s story from his hosts, and vowed to repay their bravery by writing her story.

The Song of Bernadette was published in 1941. While it’s considered a novel, the story draws heavily from history and local tradition.

In 1943, the novel became a movie, with Jennifer Jones starring as the world-changing peasant girl. Jones earned an Oscar for her portrayal of the saint.

FROM THE FOUR TOPS TO THE KINKS

But it’s the kind of name everyone knows – even during the years it flirted with obscurity. Besides the saint, there’s:

Despite all of these references, the name continued to decline in use.

But pop culture gets credit for helping to revive this name.

The Big Bang Theory centers on roommates – two physicists at Caltech, plus their scientist friends. The show debuted in 2007, and eventually included Bernadette Rostenkowski, a waitress who eventually completed her PhD in microbiology.

Even without the Big Bang boost, it’s easy to imagine this name feeling stylish again.

I’d expect to see Bernadette back in the US Top 1000 in another year or three, a name ready to replace fading favorites like Abigail.

What nicknames would you use for this name? Do you think it’s ready for revival?

First published on December 6, 2012, this post was revised substantially and republished on March 18, 2020. 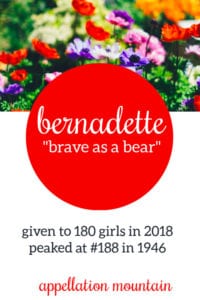 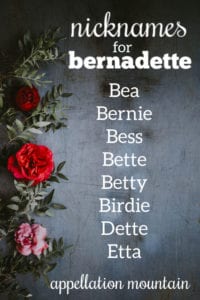