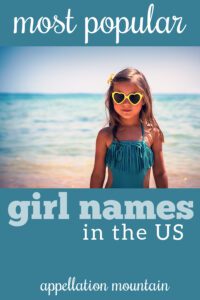 The Top 100 girl names mix evergreen classics, cool and original choices, and some just plain new ideas, along with reliable standards we’ve been naming our daughters for ages.

And yes, a name can be cool, even edgy – and still very popular.

After all, only the most appealing names make it to the top of the popularity charts.

In any given year, the most popular girl names include some rising stars and some falling favorites.

Because, yes, even in 2021 and 2022, we’re still naming our daughters Allison and Sarah, even though lots of us know moms with those names, too.

While there’s always lots of movement within the US Top 100, it’s worth noting that very few names actually entered or left the rankings during calendar year 2021. Brielle fell, making space for Athena.

Nora, Cora, and Aurora are united by sound. But Aurora has something the others lack – a tie to ancient mythology and the night sky. The Roman goddess of the dawn, Aurora is familiar to many thanks to the Aurora Borealis. Also known as the Northern Lights, a natural phenomenon caused by particles from the sun.

Ever since The Plain White Tees scored their 2007 hit with “Hey There Delilah,” this has name has slowly gone from Old Testament temptress to modern girl. Besides the song, our love of Lily, Lyla, and Layla explains a big part of Delilah’s appeal.

Emma meets Avery, for a surname-style name that feels tailor-made for this generation.

Can a name feel bohemian chic and still rank in the US Top 100? Isla can. It’s creative and shimmering, an unconventional name that just keeps catching on.

A logical successor to Ava, mini name Ivy also benefits from its status as a nature name and a number name – at least in a round-about way. Factor in Beyonce’s daughter Blue Ivy and this name emerges as a vintage favorite right at home in 2022.

On paper, it’s too soon for Jade to make a comeback. It rocketed into the rankings following the 1971 birth of Mick and Bianca Jagger’s daughter, Jade Sheena Jezebel Jagger. The name seemed to peak around 2002. But twenty years later – and half a century after it first caught on – this colorful gemstone name feels like the kind of cool that endures.

Can a name be classic and cool? Josephine makes it look easy. From Napoleon’s beloved to world-changing Josephine Baker to Little Women’s headstrong and capable Jo March, this name feels timeless and strong.

Lately it’s the Hawaiian language that inspires some of the fastest-rising choices for our daughters. Leilani is among the coolest of the bunch. It has two potential meanings: heavenly flowers, or royal child. Both feel auspicious. And the sound? It’s exactly on trend for this generation.

Night sky names carry a certain coolness – Luna’s not the only one on this list! But it also shines thanks to a Harry Potter heroine famous for her fearless individualism. Luna Lovegood proved herself heroic in battle, but also strong-willed in the ordinary everyday. Another positive: not only does the name mean moon in Latin, but there’s a minor Roman goddess by the name. Oh, and it’s the Spanish word for moon, too, making this name effortlessly cross-cultural. No wonder parents are moonstruck by lovely Luna.

The Latin word for new, Nova ranks among the most popular baby names for boys and girls. However, it’s much more familiar for our daughters. Besides the appealing – and appropriate – meaning, Nova also refers to stars and the long-running PBS science program. That makes it a dazzling choice that sounds exciting and smart.

For years, the story has been Sophia. And Sofia. But lately it’s Sophie – the French form of the name – that’s the coolest of them all. It shares Sophia’s meaning – wisdom – but with a cozy, casual vibe.

A classic-cool pick, Valentina brings to mind Valentine’s Day, but also the first female astronaut. It’s a successor to Isabella, a V name every bit as wearable as Victoria.

Among the most popular baby girl names, Amelia benefits from a vintage sound. It comes with nicknames galore, but requires none. And legendary aviator Amelia Earhart makes the name feel ambitious and fearless.

Currently the most popular form of this classic name, beating out Ann, Anne, and even Ana. She’s the younger sister in mega-blockbuster Frozen, and the kind of name that everyone knows.

Neil Diamond’s “Sweet Caroline” makes this an instant sing-along for your daughter. A feminine form of Charlotte, Caroline has long taken a backseat to Charlotte. But it’s every bit as classic, a traditional alternative for parents crushed that Eleanor is so close to the Top Ten.

Even before we heard that Will and Kate had named their daughter Charlotte Elizabeth Diana, this name jumped into the US Top Ten. It’s traditional, elaborate – and yet somehow brief, too. From Sex and the City’s Charlotte York to Bridgerton’s Queen Charlotte, this name is polished and sophisticated without being too much.

After quietly climbing the popularity charts for years, Eleanor has surpassed its previous peak. Back in the 1910s, the name regularly appeared in the Top 30. Today it’s even more loved, helped by our strong preference for El- names.

Evergreen Elizabeth is the one girls’ name that never falls out of favor.

Sarah was the Nora of the 1980s – a classic name that felt oh-so-current, even as it climbed to the top of the popularity charts. Today, though, Sarah has returned to classic status, a name beloved across languages and generations, with a meaning sure to appeal to many: princess.

Regal and of course victorious, Victoria is a larger-than-life name that still feels easy to wear. Maybe it’s all the easy nicknames, or maybe it’s the name’s long history of use.

New to the US Top 100, the Greek goddess of wisdom makes a fitting successor to Sophia.

First there was Kelly. Then Kelsey. And Kaylee and Kylie and Mackenzie and Kenzie. So Kinsley is a logical progression, a surname name every bit as wearable as former chart-topping favorites like Shirley and Ashley.

Beautifully international, Maya is a culture-crossing wonder. It’s Hebrew and Hindi, Greek and Basque. The name belongs to a Roman goddess and the mother of Buddha. No surprise it’s heard across countless nations.

A Biblical name with a distinctive, unforgettable sound, Naomi is timeless.

There’s something quirky about Penelope, a name long used for accomplished fictional women and damsels in distress, too. No question that we favor the former image today.

BEST CHOICES JUST BEYOND THE TOP 100

Charles is a classic favorite for boys; Charlotte has hit the girls’ Top Three! This sparky nickname shared across genders could be the next big thing – for both!

Another goddess name and a staggeringly lovely flower.

As Jennifer turns fifty, Juniper is the upbeat nature name poised to inherit.

Sharp, strong Maeve serves as an Irish heritage choice and a tailored successor to Ava and Claire.

Elaborately floral and slightly Southern, Magnolia combines the best of Isabella with a hint of Lily.

Harper made the Top Ten. Piper isn’t that far behind. But it’s Parker, with a vaguely outdoorsy sensibility, that could follow them both.

Brief and modern, Remi is the newest unisex R name, following Riley and River and Rowan.

Evelyn is a Top Ten favorite, but Vivian shares the same style – and might be exactly different enough to appeal.

What are your favorite Top 100 girl names? 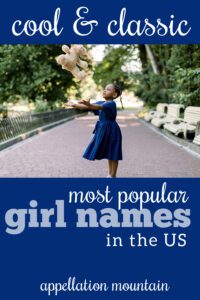 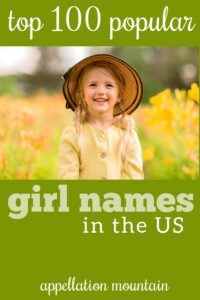 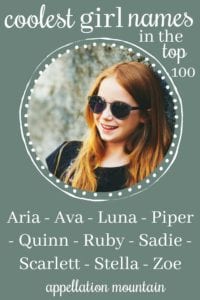