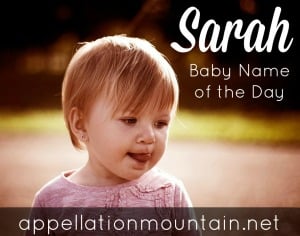 An Old Testament choice with a long history of use, today’s name is nearly as classic as Elizabeth or Mary.

Thanks to Jill for suggesting Sarah as our Baby Name of the Day.

Sarah is an interesting puzzle of a name.  With impeccable Old Testament roots and a long history of use, it would be hard to argue that Sarah isn’t an enduring classic.

And yet, Sarah is rarely mentioned on the same lists as Margaret or Jane.

Could it be her style?  There’s something simple and homespun about this name.  Maybe that’s thanks to award-winning children’s novel Sarah, Plain and Tall, about a sensible young woman who moves from Maine to Kansas to marry a widower.

And yet, Sarah means lady or princess – a title of respect in Hebrew.  And there have been plenty of aristocratic Sarahs over the years, including Lady Sarah Chatto, only daughter of the late Princess Margaret and niece to current Queen Elizabeth II.  That’s makes her twentieth in the line of succession … for now. In the Old Testament, Sarai was the wife of Abram.  God promised the childless couple family of their own, and changed their names.  Sarah and Abraham may have had their doubts, but a year later they also had a baby – Isaac.

And that’s just in recent years.  Go back a little farther, and nineteenth century activist Sarah Moore Grimke makes this a suffragette name.

Then there’s Sarah Bernhardt.  Born Rosine in Paris, France, Bernhardt was the most famous actress in the world in the nineteenth century.

Bernhardt’s legacy should add a certain level of glamour to the name. But since she’s a star from well before the rise of Hollywood, Sarah reads more vintage than glittering.

We live in a casual age, one that often favors nicknames on the birth certificate.  And traditional nicknames can feel disconnected from their roots.

How do you get Sadie from Sarah?

The Norman invasion changed the naming landscape in England forever.  Hebrew and Latin names from the Bible, as well as French names with Germanic roots replaced Anglo-Saxon go-tos.

But the English didn’t adopt new names without alteration.  They often dropped the ‘r’ sound in everyday use.

In the years following 1066, Mary became Molly, Teresa turned into Tess, and Florence answered to Flossie.  Sarah became Sally and Sadie, too.

Today, the names stack up this way:

Sarah is a study in contradictions.  Simple and homespun, but with a regal meaning.  A name that’s everywhere, over the years, and yet seems unusual on a child born in 2014.

Now that Sadie and Sally are seen as separate names, Sarah is also nickname-proof.

If you’re after a name that will wear well from childhood through adulthood, a name that is familiar but not trendy, Sarah is one to consider.

What do you think of Sarah?  Do you think this name should be considered a classic?  And do you think Sadie will be more popular than Sarah when we see the 2014 numbers?