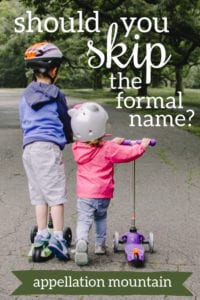 I know a sweet little boy named Nate – not Nathan or Nathaniel.  The naming of just-Nate apparently caused some consternation among the extended family, who felt he needed a formal name.

So much, that while I’m very pro-formal name, the arrival of young Nate inspired me to make the case for using the name that you love, even if it is usually considered a diminutive.

Of course, your kiddo can still have tons of nicknames. Pumpkin, Cookie, and Sweetie Pie, Slugger and Champ all remain options, no matter what you write on the birth certificate.

To be clear, I’m not talking about choosing a nickname-proof name, though much of what I’ve listed applies to choices like Mia and Piper, Mason and Jordan.

I’m talking about putting a commonly accepted diminutive for a well-established given name on the birth certificate – Tom for Thomas or Kate for Katherine, or yes, Nate for Nathaniel.

Read on for nine reasons why short and sweet can actually be the better choice.

9.  Life is complicated enough without explaining your given name.

Josie called Josie has one less thing to explain than Josephine called Josie at, well, everywhere. The doctor, the bank, the first day of school …

The hardest question she’ll ever field is whether Josie is short for something – and that’s easily answered with one syllable: no.

While I don’t believe that explaining your preferred name is a tremendous burden, it might be wearying to some parents.  If that’s you, why not avoid the hassle?

8.  It can help sidestep arguments over undesirable nicknames.

Let’s say you love Vince, but can’t stand the thought of your son answering to Vinny.  Putting Vincent on his birth certificate opens the door to either possibility.  Naming him Vince makes your wishes clear.

7.  You love the nickname, but you’re lukewarm on the traditional formal version.

Maybe you’re mad about Kate and Bess for your twin daughters.  But Katherine and Elizabeth leave you cold.  What do you do?  Consider alternatives – Katharine and Elisabeth? Katrina and Bernadette?

Maybe you just use the names you really love, and call your girls Kate and Bess.

Naysayers might dismiss nickname-names as too unconventional – another creative naming excess of the twenty-first century.

That’s not historically accurate. The pendulum has swung from formal-name-with-nickname to just-nickname and back again over the generations.  Back in 1913, Fred, Jack, and Joe were in the US Top 100 for boys. Willie, Betty, Jennie, Fannie, Carrie, and Hattie ranked in the Top 100 for girls.

I know successful women named Cindy – not Cynthia – and Cathy- not Catherine – who never missed having a formal name. They’re not alone.

5.  It is part of the natural evolution of names.

Other names have migrated from affectionate diminutive to independent name over the years.  Today a Sarah called Sadie or Sally would be a surprise, even though both names are originally pet forms of Sarah.  And when is the last time you met a Nancy who was actually Ann?

Names might still sound like a nickname to you, but in a few generations, they’ll be so separate as to be two completely distinct choices.

4.  It can completely change the vibe of a name.

John is a classic, saintly and regal. Jack is a livelier choice, a sprightly name worn by Jack Sparrow and Jack Be Nimble.

Theo seems upbeat and modern, while Theodore is the chubby chipmunk.  It is such a divide that they can feel like two completely separate names.

Parents who love John or Theodore might not care for Jack or Theo, and parents who embrace Jack and Theo might be left cold by the more formal options.

3.  It might match siblings’ names or your surname better.

If your first two children are June and Finn, a formal name with a nickname might feel out of place. Dex might be better than Dexter, or Kit better than Christopher.

Or maybe your last name is Kukowski or DiMatteo or Baumgartner.  If your surname is a mouthful, something you’re forever spelling, it might make sense to keep it simple with your child’s given name.

Nate will grow up with boys called Cole and Gage. This makes Nate feel more like a given name that he might have a few decades ago. I’ve also met a baby Jake – not Jacob, and I know more boys named Jack than John.  Regardless of origins, Nate is a good fit with a particular style of name popular in the 2020s.

1.  You might just plain love the informal version of the name.

Am I cheating here?  I’ve mentioned this with Bess and Kate, but I think it goes beyond liking the nickname better than the formal name.

It is possible to like the conventional longer form of a name, but just plain feel that your child’s name is Lou, not Louise.  While there’s something to be said for hedging your bets and putting Louise on her birth certificate, I think trusting your instincts matters, too.  So it is fine to skip Louise if you’re sure your girl is truly a Lou.