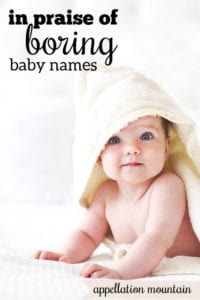 In a world dominated by Instagram, it’s easy to imagine that everyone is naming their babies something fabulous. Clever and unexpected. Just different enough. You’re stuck between Grace and Rose for middle names, but your old roommate just named her daughter Eleanora Fig. Or you’re fretting about too many girls called Ryan, while your colleague fearlessly names her son Mika Blue.

All of a sudden, naming feels like a contest.

When I meet parents and they hear what I do, they sometimes reply, with a hint of apology, “Oh, our kids’ names are so boring!”

It happened again the other day, and it hit me: Am I a part of the problem?

Here are six reasons why boring baby names are not only just fine – they’re worthy of celebration!

I’d tell you I’m the least flashy person ever, but let’s face it: most of us live pretty low-key lives. Film crews don’t follow us. Our Instagram followers are mostly friends and family. We’re ordinary, and that’s actually pretty darn glorious.

That means you can – and almost certainly should – turn down the pressure to find a one-of-a-kind name that can be trademarked. If your style is off-the-beaten-path, no worries. Use that never-in-the-Top-1000 name that you love. But don’t let our celebrity-soaked influencer culture convince you that your favorites aren’t good enough.

Classic names are only boring until you know the story behind them.

Rose is just Rose, until your daughter learns that she’s named for her beloved grandmother. Then it’s so much more. Honoring family members is one great reason to stick with the classics, but it’s true that traditional names can carry lots of meaning. Maybe your son William recalls your first apartment, on Williamson Street. Or David nods to your favorite singer.

Yes, you can go bolder. You might choose Roisin instead of Rose to reflect your grandmother’s Irish roots. Use Williamson in full. Or choose Bowie rather than David, so there’s no mistake which musician your son’s name references. But the meaning isn’t necessarily any stronger just because your choice is less conventional.

Okay, not every Top 100 name qualifies as a great choice. But most of us could cheerfully name our children from the current most popular list – except we worry that our kid will be one in a crowd. I so get it.

And yet, how many kids do you know named Eleanor or Julian? Penelope and Asher? Those are all amazing names, rich with history and meaning. Will your child meet some other children with those names? Yes. But odds are against there being six Violets and five Leos in any given playgroup. Just like songs and poems retain their meaning – perhaps even acquire more – over decades of repetition, the same is often true of names. (Think John Lennon’s “Imagine.” Poems by Walt Whitman or Emily Dickinson. Oh … and John, Emily, and Walter? All Top 100 at some point. No questions their bearers still became creative powerhouses.)

Have confidence that a great name isn’t diluted when shared.

Speaking of John, Emily, and Walter … they can grow up to be accountants or performance artists. Ditto Naomi and Carson, Lucy and Elijah. While we might worry that it’s limiting to share a name with those who came before us, or others in our age group, the opposite can be true. It’s freeing to not have a name so distinctive that it becomes a spotlight.

Because everyone recognizes these so-called boring baby names, they tend to fly under the radar. Odds are good that Clara and Isaac, Luna and Hudson will typically have their names heard – and understood – on the first try. While many mainstream names have to be spelled – is it Elliott with one T or two, Sophia with a ph or an f – that’s nothing compared to Andromeda or Dashiell.

Most of us grow up to like our names.

Whether a name is common or rare, most adults report liking their names just fine. My guess is that many of us – especially if you’re reading this – share a keen interest in naming. It’s easy to dream of another life, one where we were born Octavia instead of Nicole. But that discontent often fades.

Your best defense against worry that your child might not like their name? Be willing to explain why you chose it. (If your story isn’t epic, don’t worry – it’s more about being prepared to answer the question than having an answer that sounds like the opening paragraph of a biography.) Names are given as gifts, and there’s no guarantee we’ll get it right. But be confident that you’ve bestowing the gift with love, and that will help.

Choosing a name you love means embracing your authentic style.

We have more freedom than ever when it comes to naming our children. If you’d like to pick names that reflect your love of the outdoors, Oak and Canyon and Ridge work. You could name your daughters for your favorite artists. (How gorgeous is Kahlo?) Or your religious beliefs.

If you find yourself drawn to Henry and Josephine, that’s completely fine. Ava and Levi? Equally solid choices. The important thing is that you love the sound of your child’s name, not that it earns gold stars from some invisible panel of judges.

Coco Chanel famously said, “Fashion changes, but style endures.” That’s good advice in naming, too. If you know what you like and stay true to it, those choices will serve your family well over time. Often those so-called boring baby names are the little black dresses of the onomastic world. It’s foolish to overlook them.

And so if you worry that you’re drawn to so-called boring baby names? Embrace it! Substitute timeless or stylish for boring – because it’s all a matter of perspective. 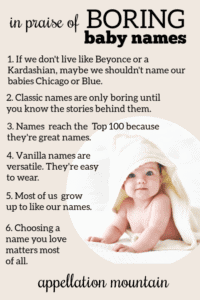 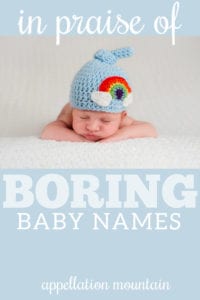