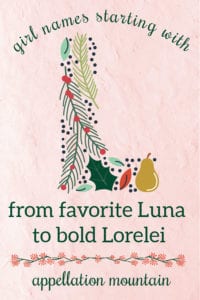 Girl names starting with L range from traditional picks, like Leah and Lucy, to newcomers, like London and Lyanna.

It’s the fifth most popular letter for girls’ names. No surprise, as L fits right in with our love of smoothly flowing “liquid” names. This is the age of Ella and Mia, Elena and Aurora. A great many girl names starting with L fit this style perfectly.

While that might feel new, it’s worth noting that we’ve long loved L names for our daughters. Linda and Lisa previously held the top spot in the US. And for every name that makes this list, there are five that I’ve overlooked.

After all, L is the letter of all the many Laura names, from tailored Lauren to flowery Loretta. And it’s also the letter of the Lous and Lus, from classic Louisa to sparky, retro Luella.

So let’s dive into the girl names starting with L, from the chart-toppers to the well-why-not possibilities.

GIRL NAMES STARTING WITH L IN THE US TOP 500

The Latin and Spanish word for moon, Luna rose on the strength of an unexpected Harry Potter heroine, combined with our love of night sky names for girls.

Eric Clapton recorded “Layla” with Derek & the Dominos in 1970. That’s fifty years ago! Clapton wrote the song about a real woman, but borrowed the name Layla from a twelfth century Persian poem. The song remains a classic, and it put the name on parents’ radar – though the sound makes it more popular than ever today.

A classic flower name, elegant and sweet, Lily outpaces any of the longer forms of this name – of which there are dozens.

An Old Testament favorite that blends an on-trend sound with deep and lasting roots.

Fun fact: Lily likely started out as a nickname for Elizabeth. Lillian evolved as an elaboration of Lily. But today, it’s the opposite – Lillian is the formal name, and Lily the sweet short form.

The medieval English form of Lucia, Lucy is brief and complete. It’s a vintage favorite enjoying a comeback these days, but Lucy never really falls out of use.

A New Testament name referring to a region of Greece, Lydia is a flowing, distinctive name that fits right in with Olivia and Amelia.

An elaboration of Lillian, this is yet another appealing Lily possibility.

Whether it’s spelled Lila, Lilah, or Lyla, there are a few possible meanings and origins for this pretty, compact name. But it’s Lyla that’s the most popular of them all.

A creative take on spelling London, more popular than the original as of the year 2020.

A storied city, London makes for an appealing place name for a son or a daughter.

And yet another spin on Layla.

It might be another of the Layla names, but most Americans rhyme Lila with Kyla.

Lily with an extra L.

Currently the most popular of all the Laura names. Hollywood star Lauren Bacall was born Betty. But it’s her stage name that caught on, and remains the perfect blend of classic and cool.

Lilah fits right in with Norah.

Originally short for Dolores, sparky Lola now stands on its own.

Sleek and stylish, Lena brings to mind the incomparable singer Lena Horne. It’s a globe-trotter name, easily recognized and pronounced in much of the world.

A longer name for Lucy, sweetly French and, thanks to Lucille Ball, a little mid-century, too.

As in the heroic and enduring Princess Senator General Leia Organa of Star Wars fame.

A longer Lily name with a dark edge. The name means “of the night” and ancient myth makes her Adam’s rebellious ex-wife, or possibly a demon. Or maybe just a misunderstood goddess. After Lilith Fair became a wildly successful female-centered concert tour in the late 1990s, the name was rehabilitated as more of a strong and independent Lily option.

A favorite for boys, occasionally borrowed for girls.

One of many long, Lily elaborations – double L or single, two Ns or one, and an i or a y make for a great many spelling options.

A classic girls’ name, Laura refers to laurel, as in the leaves used to make victory wreaths in the ancient world. It’s a name both feminine and auspicious.

Teen rom-com She’s All That launched Laney, a nickname name that feels traditional and modern all at once. It’s a sister for Sadie, a substitute for Avery, a feminine form of Lane. Laney – hold the ‘i’ – also ranks in the girls’ Top 1000, but Lane charts only for the boys. Laine appears on neither list, and Layne only makes the girls’ Top 1000 – at least for now.

Pronounce it like Layton, but spell in with a Leigh, possibly thanks to actor Leighton Meester, who rose to fame as wealthy heiress Blair Waldorf on the original Gossip Girl.

A Lucia elaboration that fits right in with longer names for girls.

Musical Lyric has gone from edgy word name in the 1990s to mainstream possibility today.

Liana might be short for Liliana, or it could be an elaboration of Lia. Either way, there’s also a type of vine called a liana.

A Leo name for a daughter.

A big, bold word name gaining in use for boys and girls alike.

Sometimes a surname, Landry comes from a medieval French saint.

This name surged in use following the success of 1965 movie Doctor Zhivago, based on a Boris Pasternak novel about the Russian Civil War. A sweeping romance about star-crossed lovers, it became a cultural sensation, influencing fashion and music. Today that’s faded, but the name remains simple and appealing.

A Scottish surname rising for boys and girls.

A modern virtue name, Liberty fits with so many three-syllable, ends-with-y names for girls, from Dorothy to Emily.

It looks like yet another creative take on Lily. But this spelling actually outranked the botanical Lily for years, including the late nineteenth and early twentieth centuries.

It might be short for Olivia, but Liv also coincides with a Scandi word meaning life.

Traditional and vintage Louisa was long out of favor, and remains far rarer than you might expect.

Like Louisa, the French Louise makes for an impeccable classic that’s just slightly under the radar.

A sparky, retro Lou-Ella mash-up with a throwback vibe.

A Game of Thrones spin on so many Lee-Anna names.

Laurence is masculine in the US, though Lawrence is the more popular spelling. But in French, Laurent is the masculine form, while Laurence is typically feminine.

George Sand chose this name for a character in an 1833 novel; others followed, and it has been used in small numbers over the years.

The spelling used by Gilmore Girls for their unforgettable mother-daughter duo continues to gain on the original Lorelei.

A name borrowed from German folklore, pop culture boosted Lorelei a few times, but it’s more popular today than ever before.

The feminine form of Lorenzo, and thus another Lawrence option for our daughters.

Celebrated singer Loretta Lynn makes this name synonymous with “Coal Miner’s Daughter.” But Loretta has history before Lynn, and the -etta ending sounds fresh and ready for revival.

Created for the title character in 1869 novel Lorna Doone, this name was meant to be romantic. It’s also edible, thanks to the Lorna Doone cookies named after the novel.

A region of France, borrowed for our daughters.

A sweet nickname name, Lilou took off in France after The Fifth Element gave us Milla Jovovich as Leeloo in the 1997 sci fi blockbuster.

A place name that feels a little bit like an elaboration of Louisa. After all, it was named for King Louis XIV of France.

Another French place name, Lourdes is famous for apparitions of the Virgin Mary. That makes Lourdes more a spiritual choice than a geographic one.

A Spanish elaboration of Luz, meaning light – and also connected to the Virgin Mary.

The French feminine form of Lucien, this name seems at least as wearable as Vivienne and other French names for girls.

There’s something intense about Lucretia. Maybe it’s thanks to political power-player Lucrezia Borgia, a figure who continues to fascinate, centuries after she lived in Renaissance Italy.

A sweetly vintage nickname name for Louisa, Lula could stand on its own in our age of Luna and Lyla.

A Finnish word meaning snow, and sharing the Lu sound.

Lupita is a Spanish nickname for Guadalupe. It’s been made world famous by talented Kenyan-Mexican actor Lupita Nyong’o.

The Latin word for light, and a tailored, sharp possibility for a child’s name.

A lovely nature name possibility, boosted by that middle ‘v’ sound, as well as a minor Harry Potter character.

One of the Leo name possibilities for girls.

A Spanish saint’s name, ultimately derived from the Latin word for joy.

Originally short for Elizabeth, this German nickname name now stands alone thanks to the eldest von Trapp daughter in The Sound of Music.

Another underused flower name, Lilac fits right in with Lily.

A tailored surname name, but also inspired a tree.

Another flower name, with a lovely, on-trend sound.

What are your favorite girl names starting with L? 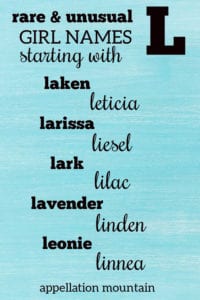 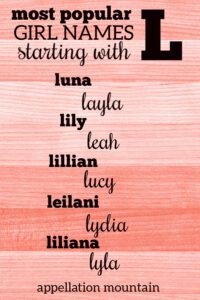 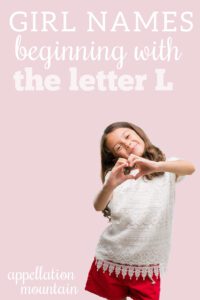