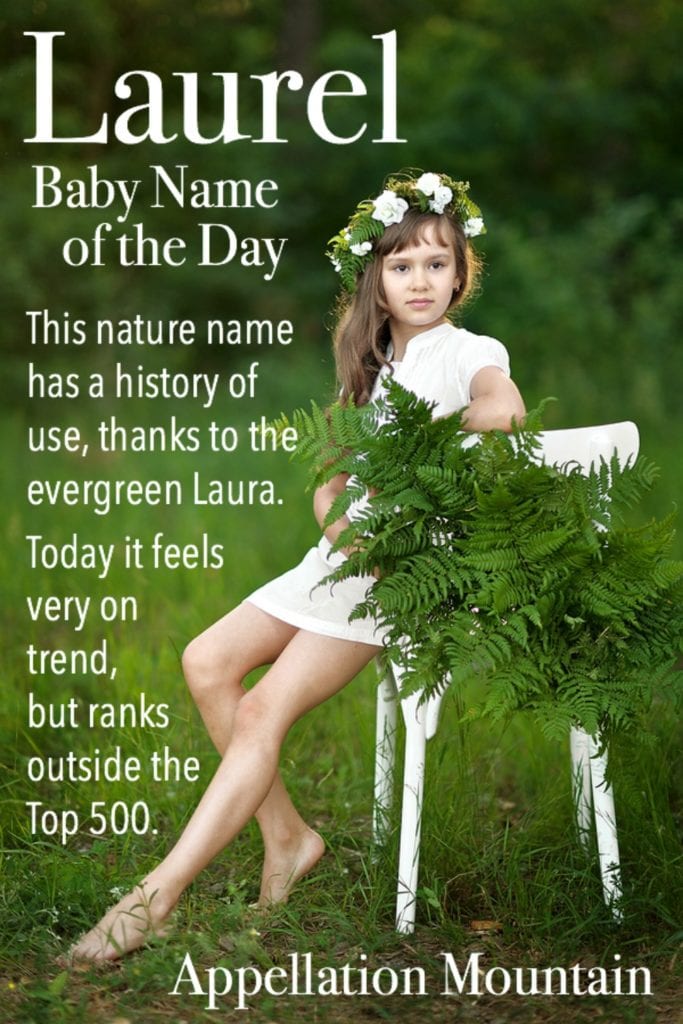 Laurel bridges the gap between classic Laura and novel nature names like River and Wren.

Laurel: To the Victors

File this one with Rowan and Juniper. It’s another tree name that feels very wearable for a child.

The green leaves of laurus nobilis have long symbolized achievement. In Greek myth, Apollo wore a wreath made of them. Ancient Olympic champions were crowned with the leaves; later, so were military commanders in Rome.

It inspired the title “poet laureate,” and if you “rest on your laurels,” you’re relying on your past success rather than working hard today.

You might argue this makes Laurel a virtue name. But it succeeds for another reason.

Laura comes from laurus, too. The name always ranks in the US Top 400, and spent most of the twentieth century in the Top 100. Today, Laura has fallen out of favor, but remains a widely recognized classic.

Laur- and Lor- names regularly chart well in the US, though many – like Lorelei – are related only on sound.

No surprise, then, that Laurel peeks into the US Top 1000 a few times in the late 1800s. It sounds so much like evergreen girls’ name Laura.

You might expect the names to rise and fall together, but the pattern varies.

You might think of this as a surname name, and indeed that can be the case.

But the most famous bearer of the name started out life as Arthur Stanley Jefferson, but you know him as Stan Laurel, comedic partner to Oliver Hardy. They appeared in a film together as early as 1921, but didn’t become a duo until 1926. Their partnership continued until 1951. The comedy duo’s movies and shorts remain in heavy rotation; odds are that everyone has seen at least a snippet of their work.

Or at least that held true until recently. Younger generations – including children born today – may not stumble on their comedy sketches. If anything, that probably makes the name more wearable.

Laura remained a Top 100 choice through the 1990s, and Lauren stayed there until just a few years ago. They fell, as an entire class of nature name rose.

Combine these two factors, and Laurel qualifies as a current name. But it didn’t make the first wave of nature names, because we were still so in love with other Laur- choices.

Laurel: On the Rise

In fact, Laurel left the charts entirely after 2008. Now the name has returned, climbing to #643 in recent years. That’s a quick reversal!

It fits in perfectly with current trends. Consider:

One more factor? This now counts as a bona fide super hero name, one that expectant parents know thanks to Arrow. The CW series gave us attorney-turned-vigilante Laurel Lance in 2012, and she will return for a sixth season.

If you’re looking for a girl’s name that feels fresh and modern, but has unquestionable ties to the past, Laurel belongs on your list. Call it an on-trend name that feels surprisingly conventional, too.

What do you think? An underused gem or too close to long-time favorites to feel truly novel?